A Worldwide Revolution Is Underway

Puerto Rico. Hong Kong. Ecuador. Haiti. Lebanon. Iraq. And now, Chile. People are rising up around the world against austerity and corruption, defying police forces unleashed to suppress them. Many of these mass movements share a fierce critique of capitalism. In Santiago, Chile, more than 1 million people flooded the streets last weekend, and mass protests continue. There, the brutal Pinochet dictatorship from 1973-1990, during which thousands of progressive activists and leaders were tortured, disappeared and murdered, was followed by decades of neoliberal policies, with rampant privatization, union busting, stagnant wages and increased costs for education, health care, transportation and other services. Chile, among the richest countries in South America, is also one of the most unequal. At least 20 people have been killed during recent protests there, further angering and emboldening the crowds.

These global protests also occur at a critical inflection point in history, with as few as 10 years remaining for humanity to transition from a fossil fuel economy to one powered by renewable energy. On Wednesday, Chile’s embattled, billionaire president, Sebastian Pinera, abruptly announced that his country was cancelling plans to host two major international summits, the Asia-Pacific Economic Cooperation meeting in mid-November, and the United Nations climate summit, the 25th “Conference of the Parties,” or COP25, in the first two weeks of December.

Carolina Schmidt, Chile’s COP25 president-designate, said, “The citizens have expressed in a strong way their legitimate social demands that require the full attention and all efforts from the government.”

Chile’s cancellation of the COP could be a setback for global action on climate. But climate activists should take heart: This renewed spirit of rebellion around the world signifies a rejection of the status quo, and could portend accelerated, grassroots mobilization to avert irreversible, catastrophic climate change.

“Social injustice and the climate crisis have a common root cause,” the Climate Action Network said in a release not long after Chile’s COP cancellation. “Climate justice and solidarity is fundamentally about the protection of human rights and a better quality of life for all.”

The climate crisis touches everyone, first and most forcefully the world’s poor. The mass uprising in Puerto Rico that forced the resignation of Gov. Ricardo Rossello was the culmination of decades of frustration with Puerto Rico’s colonial status and the more current exploitation by Wall Street vulture funds. But the discontent was fueled by the utter devastation of the back-to-back hurricanes Irma and Maria two years ago. “The austerity policies that have been implemented have put the people of Puerto Rico in a position of vulnerability. Social inequality has increased to levels that we have never seen here,” Manuel Natal, a member of Puerto Rico’s House of Representatives, said on the “Democracy Now!” news hour days before Rossello’s resignation. “We need more democracy, not less democracy. We are on the brink of a political revolution here.” Rossello’s ouster was the first time in U.S. history that a governor was forced from office by popular protest.

Indigenous people are also leading the way, often at the front lines, confronting resource extraction with disciplined, nonviolent resistance. Hundreds of indigenous and campesino social leaders in Colombia have been murdered in recent years, simply for standing up for justice and environmental protections.

The Paris climate agreement specifically notes the importance of climate justice, and pledges to work “in the context of sustainable development and efforts to eradicate poverty.” One of the enduring conflicts that has hampered international climate negotiations has been the refusal by wealthy nations, principally the United States, to accept the simple premise that “polluters pay.” The United States is the wealthiest nation in human history because, in part, it has polluted its way to the top, using cheap, dirty power: coal-fired power plants, diesel locomotives and now, so-called clean-burning fracked gas.

The Green Climate Fund was supposed to raise billions of dollars to finance renewable projects in poorer countries. The fund’s pledging conference last week fell short of its goal, primarily because the Trump administration reneged on the U.S.’s $2 billion commitment. Australia and Russia followed suit, refusing to make contributions.

A new study by Climate Central, a news and science organization, shows that climate-induced coastal flooding will likely be far worse than previously predicted, forcing between 200-600 million people, rich and poor, to flee their homes later in the century. Climate change-fueled wildfires are now raging across California, with hundreds of thousands of people evacuated from their homes and at least 1 million people without power.

Popular uprisings are also spreading like wildfire, though, against corrupt autocratic leaders, austerity and inequality. People are also flooding the streets, globally, linking the movements against inequality with the fight for a just, sustainable world powered by renewable energy.

StoryDec 06, 2019“It’s Our Future”: Meet the Youth Activists Behind Fridays for Future Movements in Uganda and Chile 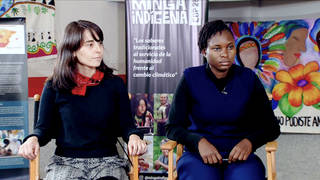 “It’s Our Future”: Meet the Youth Activists Behind Fridays for Future Movements in Uganda and Chile