The Right Livelihood Award is marking its 40th anniversary. The award was established in 1980 to honor and support those “offering practical and exemplary answers to the most urgent challenges facing us.” It has since become known as the “Alternative Nobel Prize.” Over the past four decades, the award has been given to activists and grassroots leaders around the globe. A number of them have gone on to win the Nobel Peace Prize. This year’s winners are Swedish climate activist Greta Thunberg; Sahrawi human rights leader Aminatou Haidar, who has challenged the Moroccan occupation of Western Sahara for decades; Chinese women’s rights lawyer Guo Jianmei; and indigenous leader Davi Kopenawa and the Yanomami Hutukara Association, who fight for the Amazon’s biodiversity and the rights of Indigenous peoples in Brazil. In Stockholm, Sweden, we speak with Ole von Uexküll, executive director of the Right Livelihood Foundation. He says the name of the award refers to “the idea of living lightly on the Earth, of not taking more than a fair share of the resources, and it means to bring change into the world through your practical actions.”

StorySep 24, 2019Meet Brazil’s Indigenous Leader Attacked by Bolsonaro at U.N. over Efforts to Preserve the Amazon

AMY GOODMAN: We’re broadcasting from Stockholm, Sweden, where the Right Livelihood Awards are marking their 40th anniversary. The Right Livelihood Award was established in 1980 to honor and support those “offering practical and exemplary answers to the most urgent challenges facing us today.” It’s since become known as the “Alternative Nobel Prize.” Over the past four decades, it’s been given to activists and grassroots leaders around the globe, a number of whom have gone on to win the Nobel Peace Prize.

But first, we’re joined in our studio by Ole von Uexküll, executive director of the Right Livelihood Foundation based here in Stockholm.

Welcome to Democracy Now!, Ole. It’s great to have you with us. Congratulations on this 40th anniversary.

AMY GOODMAN: Can you talk about how these awards got started and why they’re here in Stockholm?

OLE VON UEXKÜLL: Yeah, this is now 40 years ago. It was during the days that John Lennon was shot dead in the streets of New York that the foundation started here with its very first award presentation. Now we’ve been doing this for so many years, now 178 laureates from 70 countries.

Now, the first idea was really linked to the Nobel Foundation, which is a foundation based here in Stockholm, when they — because they are responsible to carry out the will of Alfred Nobel, and the will of Alfred Nobel said that his capital should be used to start these five Nobel prizes. And then the Nobel Foundation started a sixth Nobel Prize, the prize in economics, in 1969.

And from that emerged the idea — and it was my uncle at the time, Jakob von Uexküll — to think, if you can start new Nobel categories, it shouldn’t just be one in economics. There should be a Nobel Prize — which is still the world’s most important award — also for people who work for the environment and for the interest of the poor majority in the world.

AMY GOODMAN: So, you have had this award for sustainability and equality. And will the Nobel Foundation consider adding it as another Nobel Prize?

OLE VON UEXKÜLL: They took a decision then, in 1980, when my uncle made this offer, to not take on any new categories any longer. But it didn’t need the blessing of the Nobel Foundation, and so he went on to start the Right Livelihood Foundation. But because of this history, it’s still referred to as the Alternative Nobel here in Sweden.

OLE VON UEXKÜLL: It’s the idea of living lightly on the Earth, of not taking more than a fair share of the resources. And it means to bring change into the world through your practical actions. We call our laureates practical visionaries, people who are working towards a vision of how the world could be so different, but who show with their concrete work what the steps on this way can be, who prove that solutions are possible.

AMY GOODMAN: This year, two of the four Right Livelihood laureates are not here, for different reasons. You have Greta Thunberg, who’s actually from Stockholm, but she has just made landfall in Portugal, heading to Spain for the U.N. climate summit, tries to minimize her carbon footprint. And then you have the Chinese lawyer. Explain why she has not come.

OLE VON UEXKÜLL: She could not travel from China to attend the award presentation here in Stockholm. It’s a sign of the shrinking space for civil society around the world. We’ve seen that in recent years with laureates from other countries, as well. We’re in constant contact with her, and we’ve agreed that we’re not commenting on the exact reasons. The good thing about our relationship with our laureates is that it doesn’t end with the award presentation. Rather, the opposite. We have an ongoing cooperation with many of our laureates, and we hope that there will be other opportunities to meet Guo Jianmei.

AMY GOODMAN: One of those who will be appearing tonight, not in person but by Skype, is Edward Snowden, who is in political exile right now in Moscow, Russia. I’ll be interviewing him from the stage. And others have gone on to win the Nobel Peace Prize, like Wangari Maathai, the great environmentalist.

OLE VON UEXKÜLL: Indeed. We see that this award is an enormous support for the laureates. The support takes very different shapes. We have some, like Greta Thunberg, who have enormous worldwide attention already. We have others who are really, through this award, for the first time catapulted onto a world stage. And for all of them, through our office in Stockholm, but also through our office in Geneva, where we have consultative status with the United Nations, we continue the cooperation.

AMY GOODMAN: Aminatou Haidar, who we just interviewed last night and will be broadcasting on Democracy Now!, the Sahrawi leader who has opposed Moroccan occupation of Western Sahara, is one of those who will be awarded tonight. And the other, Davi Kopenawa.

OLE VON UEXKÜLL: Indeed. And both of them are here. And this is an example where, for Aminatou Haidar, for instance, the conflict in Western Sahara has been neglected for far too long, and the neglect of not just the international community, but also, unfortunately, we have to say, the press, communicates that if you protest violently, then you have the world’s attention, but if you protest in a nonviolent way, as Aminatou and the people of West Sahara have been doing, then nobody really cares. And we really hope to shine a light on this, what is called a frozen conflict, but where there’s suffering going on every day.

AMY GOODMAN: Well, we are going to play now the words of Davi Kopenawa, the fourth Right Livelihood winner, the laureate, tonight. I want to thank you, Ole von Uexküll, for joining us today, executive director of the Right Livelihood Foundation, based here in Stockholm, as we turn to this indigenous leader in his own words. 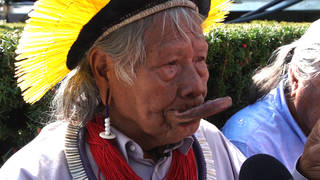 Meet Brazil’s Indigenous Leader Attacked by Bolsonaro at U.N. over Efforts to Preserve the Amazon