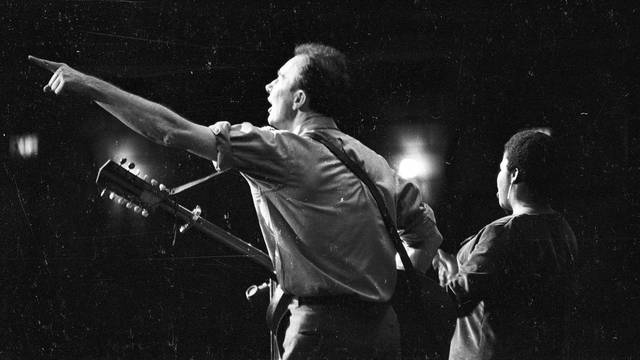 Listen to an unreleased version of Pete Seeger’s “My Dirty Stream (The Hudson River Song).” The song was first aired on today’s Democracy Now!

The never-before-released version of the song appears on a forthcoming Smithsonian Folkways box set to mark the 100th anniversary of Pete Seeger’s birth on May 3, 1919.

Pete Seeger: I honestly believe that the future is going to be millions of little things saving us. I imagine a big seesaw, and at one end of this seesaw is on the ground with a basket half-full of big rocks in it. The other end of the seesaw is up in the air. It’s got a basket one-quarter full of sand. And some of us got teaspoons, and we’re trying to fill up sand. A lot of people are laughing at us, and they say, “Ah, people like you have been trying to do that for thousands of years, and it’s leaking out as fast as you’re putting it in.” But we’re saying, “We’re getting more people with teaspoons all the time.” And we think, “One of these years, you’ll see that whole seesaw go zooop in the other direction.” And people will say, “Gee, how did it happen so suddenly?” Us and all our little teaspoons. Now granted, we’ve got to keep putting it in, because if we don’t keep putting teaspoons in, it will leak out, and the rocks will go back down again. Who knows?