A new investigation by The New York Times has exposed the financial schemes at the root of the New York City taxi driver crisis. While the advent of apps like Uber and Lyft contributed to a loss of income for licensed taxi drivers, the exposé finds that a taxi medallion bubble helped lay the groundwork for their economic devastation. A group of industry leaders artificially inflated the cost of taxi medallions and orchestrated a predatory lending scheme, collecting millions of dollars in the process and putting many drivers into debilitating debt. City agencies did little to curb the system, which a Harvard professor called “modern-day indentured servitude.” In response to the report, Mayor Bill de Blasio said the city would launch an investigation into the predatory practices of taxi medallion brokers. New York state Attorney General Letitia James announced her office is also initiating an investigation. At least eight drivers have died by suicide—including three taxi medallion owners—since the start of 2018, with at least some of the drivers linking the decision to their crushing debt. We speak with investigative reporter Brian Rosenthal, who wrote the report.

JUAN GONZÁLEZ: A new investigation by The New York Times exposes the financial schemes at the root of the New York City taxi driver crisis. The report reveals that a group of industry leaders artificially inflated the cost of taxi medallions and orchestrated a predatory lending scheme, collecting millions of dollars in the process and putting many drivers into debilitating debt. City agencies did little to curb the system, which a Harvard professor who is quoted in the report called “modern-day indentured servitude.” In response to the Times report, Mayor Bill de Blasio said Monday the city would launch an investigation into the predatory practices of taxi medallion brokers.

AMY GOODMAN: New York state Attorney General Letitia James announced her office is also initiating an investigation. While the advent of rider apps like Uber and Lyft contributed to a loss of income for licensed taxi drivers, the investigation finds the taxi medallion bubble helped lay the groundwork for the current driver crisis. At least eight drivers have died by suicide, including three taxi medallion owners, since the start of 2018, with at least some of the drivers linking to their crushing debt.

For more, we go to now—we’re joined by the story’s author, the investigative reporter Brian Rosenthal.

BRIAN ROSENTHAL: Thanks for having me.

AMY GOODMAN: An incredible exposé. Every day, another investigation is being launched based on your original report. Brian, just lay out what you found.

BRIAN ROSENTHAL: Basically, we found a financial bubble in the taxi medallion industry, very similar to the obviously much larger bubble in the real estate industry. And we found that the price of these medallions—that’s the permit that’s required to operate a cab in New York City—had grown from $200,000 in 2002 up to over a million by 2014, even though there hadn’t been any change in what the cab could generate on the road. And we found that the reason for that was really people in the industry, industry leaders, artificially inflating the price, then making hundreds of millions of dollars by providing these reckless loans to drivers interested in buying medallions.

JUAN GONZÁLEZ: And interestingly, you noted that it was under, first, Mayor Bloomberg and Mayor de Blasio that the city actually made a lot of money off increasing the controlled number of medallions, right? I think it was about a thousand under Bloomberg, another thousand or so under de Blasio. And interestingly, de Blasio himself had huge campaign contributions from the taxi—the yellow cab industry, didn’t he?

BRIAN ROSENTHAL: Yeah. I mean, that’s one of the things that’s really interesting about this asset, as opposed to real estate or anything else. This is something that was sold by the city. And we found that the city actually knew that the prices were inflated, but still sold these medallions at these very high prices. Between Bloomberg and de Blasio, they made more than $855 million off of these medallion sales. And yeah, we did find a lot of political connections between the industry and not just Bill de Blasio, but also Governor Cuomo and Senator Alfonse D’Amato, who was responsible for some of this back in the day. We found that the taxi industry is one of the more politically connected industries, and it’s really used that influence.

AMY GOODMAN: I want to turn to a clip from The Weekly. This is one of the taxi drivers that you profiled in your New York Times piece. This is Mohammad Hossain.

MOHAMMAD HOSSAIN: I bought a medallion from the city. I think city will help me, you know? I see on the—I know so many drivers, they kill themselves. But I have a family. I love my family. So I don’t want to kill myself. My life is more important for my family—I love my family—than medallion.

AMY GOODMAN: That’s Mohammad Hossain. Tell us more about him. And tell us about the root of this problem.

BRIAN ROSENTHAL: He is one of those people that bought a medallion at an auction. He was unlucky enough to buy at the final auction. And he thought that he was making a decision that was going to not just improve his life, but improve his family’s life for generations to come.

BRIAN ROSENTHAL: He paid $890,000. He got a loan for the vast majority of that. But he did pour his life savings into the purchase. And now he is underwater and can’t pay that back.

JUAN GONZÁLEZ: Could you talk about the racial aspect of this, the changing demographics of the taxi industry? Just as increasing people from Asia and a lot of Indians and Pakistanis became taxi drivers, medallion owners, was when the predatory practices sort of skyrocketed?

BRIAN ROSENTHAL: Yeah. I mean, if you look back in history, the taxi driver in New York used to be kind of a classic New Yorker. I think we have this image from the TV show Taxi, which is before my time. But in recent years, 91% of taxi drivers were born outside the United States. Forty percent of them were born in South Asia. But that was a factor that really contributed to this, because a lot of the people that were buying these medallions did not speak English fluently, did not necessarily understand what they were signing up for, and that left them vulnerable.

AMY GOODMAN: Can you talk about those that have benefited being similar to, as you’ve said, or perhaps the same as those who benefited from the housing market crash in 2008 and ’09?

BRIAN ROSENTHAL: Yeah, we found a lot of similarities: similar lenders issuing the loans, but also the lending practices themselves—these no-down-payment loans, these balloon loans, where there’s a teaser rate that looks good at first, but it’s going to cost you later, and these interest-only loans, and really a lot of practices that created a lot of profits for banks but were very risky.

JUAN GONZÁLEZ: And what about the impact of Uber and Lyft and the black car industry? Because, clearly, there are about 13,000 yellow cabs in New York, but there are more than 60,000, as I understand, of black cabs and others that are doing—working for Lyft or Uber and these others. What impact did that have on the ability of these drivers to be able to get sufficient money to pay off these medallions?

BRIAN ROSENTHAL: Yeah, it’s had an impact, no doubt about it. But one of the things we found in our story was, it’s actually had a smaller impact than you might think. Part of the reason why is that 97% of taxi rides are either in the core of Midtown Manhattan or at the airports, and the majority of Uber and Lyfts are in the outer boroughs. So, if you look at the revenue per cab, it’s only down by about 10% since Uber and Lyft came. But the problem is, is that they were operating on such a thin margin, and it was so unsustainable and so unstable already, that even that relatively small revenue drop led to this huge catastrophe.

AMY GOODMAN: Talk about the investigations—now Letitia James, the New York attorney general; Bill de Blasio, the city mayor. What will these investigations do?

BRIAN ROSENTHAL: Well, it’s still very early, so we’re not exactly sure. But the attorney general has said that she’s going to look at the lending practices and see if they violated any laws related to predatory lending. And the mayor has said that he’s going to look at the brokers, which is the area that he can control the most, and see if they engaged in any predatory lending practices in arranging these loans.

AMY GOODMAN: Well, I want to thank you so much for being here, Brian Rosenthal. We’re going to do Part 2 of our discussion and post it online at democracynow.org. Brian Rosenthal, investigative reporter for The New York Times. His report on the New York City taxi medallion scam is headlined “'They Were Conned': How Reckless Loans Devastated a Generation of Taxi Drivers.”

And that does it for our broadcast. I’m Amy Goodman, with Juan González. This is Democracy Now! 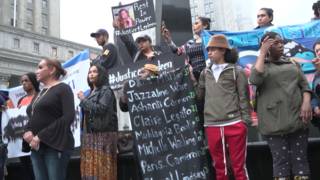