The U.S. Women’s Soccer World Cup Win Was a Victory for Title IX & the Fight for Equal Pay

Thousands gathered in Manhattan Wednesday to celebrate the U.S. women’s national soccer team’s fourth World Cup championship at a ticker tape parade that stretched up Broadway and past Wall Street. Megan Rapinoe, Alex Morgan, Rose Lavelle and their teammates rode floats through New York City’s Canyon of Heroes, ending their celebrations at a ceremony at City Hall. Supporters chanted “U.S.A.!” and “Equal pay!” The U.S women’s World Cup victory came just months after members of the 2015 women’s team sued the U.S. Soccer Federation over gender discrimination. Their high-profile fight for pay equity is focusing the spotlight on the pay gap for all women, not just soccer players. We speak with Julie Suk, professor of sociology at the Graduate Center at CUNY.

NERMEEN SHAIKH: The World Cup may be over, but it’s only the beginning of the U.S. women’s team’s continued battle for equal pay and working conditions, equal to the U.S. men’s team. Prize money for this year’s Women’s World Cup is just $30 million, compared to $400 million for the 2018 men’s World Cup.

AMY GOODMAN: The U.S. women’s World Cup victory came just months after members of the 2015 women’s team sued the U.S. Soccer Federation over gender discrimination. This is co-captain Megan Rapinoe, the team’s top scorer and best player, addressing the crowd at City Hall just after they received the keys to the city.

MEGAN RAPINOE: It’s our responsibility to make this world a better place. I think this team does an incredible job of taking that on our shoulders and understanding the position that we have and the platform that we have within this world.

We are joined now by Julie Suk, professor of sociology at the Graduate Center at CUNY. She’s also dean for master’s programs.

Welcome to Democracy Now! It’s great to have you with us. So, you’re here in the city, the city of the Canyon of Heroes, where the ticker tape parade took place, the women’s soccer team exultant and defiant. As the head of the U.S. Soccer Federation addressed the crowd at City Hall, he was met by chants of “Equal pay! Equal pay!” What does this movement—what does this call by the women’s soccer team—yes, in the realm of soccer—mean for this country, for women around the country?

JULIE SUK: So, Title IX is a statute that was passed in 1972, around the time that the Equal Rights Amendment was being sent to the states for ratification. And it’s a statute that prohibits not only discrimination in educational programs receiving federal funding, but also prohibits the exclusion from participation on account of sex.

And what that has meant in practice, because of the way that it’s been interpreted through policy guidances, is that it’s not enough just to say we’re not discriminating on the basis of gender. Institutions, universities actually have to equalize conditions, so that women and men really have an equal athletic opportunity in sports programs. And this has made a huge difference to the ability of women to participate in sports and eventually to excel over a generation, so as to win the Women’s World Cup.

NERMEEN SHAIKH: And does that apply only to universities? It doesn’t apply to schools, high schools?

JULIE SUK: Oh, it applies to all recipients of federal funding.

NERMEEN SHAIKH: And do you agree that the women’s soccer team won because, precisely, of this, of Title IX and what it enabled for women athletes?

JULIE SUK: I do, because I think that what Title IX shows is that if we’re really committed on the ground to actual equality between men and women, and have a very robust understanding of what that means, it means that we can unleash women’s full potential. And there’s so much talent that I think is not allowed to come out when we have unequal pay practices or when we have various practices on the ground that exclude women one way or another.

NERMEEN SHAIKH: And what kind of legislation do you think is necessary to ensure a more equal pay for men and women?

JULIE SUK: Well, currently, we do have Title VII, in employment, and the Equal Pay Act of 1963. And those are the statutes that the women’s national team is invoking in their lawsuit that was filed, that you mentioned. And those statutes do not go far enough, because even though they require equal pay for equal work, there are a lot of exceptions, including if you base—if you pay men and women unequally based on any other factor other than sex, that’s legal under the Equal Pay Act.

Many other countries in recent years have passed more robust equal pay laws. For example, in France, they now have an equal pay index, so that large employers will have to measure certain things like the pay gap between men and women in the company, the number of women who have gotten raises after maternity leave, those kinds of things. And they get a certain score. And if their score falls below a certain level, they have three years to fix it. And if they don’t fix it, they could get fined up to 1% of payroll. So, that’s something that I think that’s very robust that you’re seeing in other countries. Other countries that also have gender equality in their constitutions.

AMY GOODMAN: And talk about the state of pay and also of wealth, the disparity between men and women in the United States.

JULIE SUK: Well, I think it’s a very complicated thing. One figure that we have is that women make 80 cents on the men’s dollar. And it’s due to a large range of factors.

JULIE SUK: So, yeah—well, that’s all women. That’s all women. And then, if you break it down, of course, then you get lower percentages as compared to men. But I think that a lot of the factors have to do not only with discrimination because of gender stereotyping and exclusion of women in certain programs, from education all the way up to the workplace; it has a lot to do also with the effects of gender roles on women’s careers and their earning abilities, including the fact that many women take career breaks in order to raise children and because in this country we don’t really have meaningful paid parental leave for men or for women, and this tends to have a pretty bad effect on women’s earning ability over their careers. So, that 80% is something that’s complicated. It represents not only discrimination in the context of underpaying women for the exact same jobs, but broader disadvantages that have to do with the gender roles that women and men play in our society.

NERMEEN SHAIKH: And how do you think, in fact, that compares, to the extent that, of course, it’s true that the U.S. has, among the OECD countries, among the worst provisions for maternity and paternity leave—to what extent is that, in fact, a reflection of how far we are here from gender equality? Because it kind of says something about how the role of the mother—and the father, but principally the mother, given what you’ve said about gender roles—how much that’s valued and how much space is made for it.

JULIE SUK: Absolutely. Economists who have studied the gender pay gap have suggested that if you control for maternity, the gender pay gap actually narrows significantly. So, if you control—so, that’s to say that women who are not mothers make almost as much as men, whether they’re fathers or not. And so, you’re absolutely right that our lack of accommodation for working mothers in this country, including our lack of a federal policy of paid parental leave—right now only, I believe, 11 or 12% of American workers have access to paid parental leave. And when the leave is not paid—that is, we have a Family and Medical Leave Act that authorizes unpaid leave up to 12 weeks—but when families have unpaid leave, the time that you have a baby is really not a good time not to be making any money. And what this usually means is that men continue to work, and women take as short a time—a period of time off as possible, if they don’t have access to paid leave. And this also has very bad effects on maternal health and infant mortality.

AMY GOODMAN: And finally, how does Title IX, how does equal pay, in particular—how would these be affected by the passage of the Equal Rights Amendment? And explain what that is.

JULIE SUK: So, the Equal Rights Amendment is an amendment to the U.S. Constitution which was proposed almost a hundred years ago, that says equality of rights shall not be denied or abridged by the United States or by any state on account of sex. So it would prohibit the government from discriminating on the basis of sex. And what it would do is that it would make the government responsible and accountable for a wide range of governmental failures in the context of gender inequality. So, obviously, they would not be able to actually exclude women from any government programs or public educational programs on the basis of sex. But I think it could mean something more. That is, if you’re not abridging equality of rights, it means that when we systematically fail to provide equal opportunities on the ground, that the government is somehow responsible. And I think that it would make sense then to have the kind of robust understanding of nondiscrimination that you see in the context of Title IX, which has really produced results.

AMY GOODMAN: And what would it take to pass Equal Rights Amendment, the ERA, right now?

JULIE SUK: We are so close, because what it would take right now is one more state legislature to ratify the Equal Rights Amendment. What happened when the Equal Rights Amendment was sent to the states for ratification was that we got 35 states before the deadline in 1982, and we need 38. And since 2017, Nevada has ratified, and Illinois has ratified. And so, if we have one more state, we’ll have 38 states.

AMY GOODMAN: Well, I want to thank you very much for being with us. We’ll certainly continue to follow that movement. Julie Suk, professor of sociology at the Graduate Center at CUNY, the City University of New York. She’s written about the ERA and about gender equality in constitutions across the world.

When we come back, Labor Secretary Alex Acosta faces calls to resign over his handling of the Jeffrey Epstein serial sexual, child sexual assault case. Acosta is being criticized for cutting the budget to fight international sex trafficking by 80%. Stay with us. 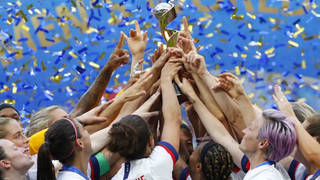