Dozens of people were hurt after an ExxonMobil oil refinery in Baytown, Texas, exploded and caught fire on July 31. It was the latest in a series of industrial fires this year in the Houston area, known as the energy capital of the world. The same ExxonMobil facility caught fire in March, and blazes broke out in March at a petrochemical terminal in Deer Park and in April at the KMCO chemical plant in Crosby.

Democracy Now! video producer Hany Massoud visited Baytown following the most recent incident and spoke with Augustin Loredo, a teacher and lifelong resident, who says it’s not uncommon to hear explosions in the city. Loredo also discusses the environmental and health impacts the oil industry has had on the community, particularly communities of color. “Other parts of the country don’t have to deal with things like these explosions,” he says. “They don’t have to deal with things that might cause other health adverse effects on their bodies.”

AMY GOODMAN: In Texas, at least 66 people sought medical attention Wednesday after part of a sprawling ExxonMobil refinery exploded and caught fire. The disaster in the city of Baytown, some 25 miles east of Houston, sent huge plumes of black smoke into the sky and prompted a shelter-in-place order for 5,000 people. This is longtime Baytown resident Agustin Loredo.

AGUSTIN LOREDO: My name’s Agustin Loredo. I’m a lifelong resident of Baytown. Family’s been here since the last century, since probably the mid-'20s, when they got here. I'm a teacher, and I’m also a board member here on the local school district.

And whenever I hear about the explosions or I hear about incidents at Exxon, I feel anxious, for a couple of reasons, not so much — well, of course, because of what could be being released into the air, but mainly because I don’t know what the reasoning is, especially if you just hear an explosion. I mean, you hope — well, this is the society we live in. You hope it’s something that can be controlled quickly. But you get anxious because, I mean, you’re always afraid of a domino effect. They say that there’s precautions in place so that there’s not a domino effect, but if these things are full of chemicals, can you imagine, you know, something — this whole thing is full of flammable things. And there’s a ton of pipelines that run under all of these areas.

I think the most important thing to remember, you know, right after Harvey, they — Harvey was the first time in, I believe, ever, in the history of Exxon, which is a hundred years, since it was Humble Oil — it was the first time that the plant completely came to a stop. There was no production because of the hurricane. The government, because that happened, they deregulated some of the stuff that they could do. They didn’t enforce regulation because of the amount of — what it took for them to get their crackers up, their generators up. You know, there was a lot of black smoke going up in the air. But the problem is, is that here we are, many, many, many months after Harvey, and the government still hasn’t gone back to those pre-Harvey regulations.

In many areas where there are petrochemical plants — at one time, there were a lot of — it was a very homogeneous group that lived there, you know, and over the years, not just in Baytown, but you look at where Valero is in Houston, the Manchester area, all those areas are now where minorities are. This is another community. This is Oakwood Addition. This is primarily an African-American community. We just passed up Robert E. Lee High School.

I mean, look, that’s Exxon, and here’s a community. You know, it’s a field away. I mean, kids used to live and play in these — the area that’s fenced off right now used to be baseball fields for the kids when I was a kid. These were all baseball fields. And now there’s fences.

The tough part about thinking about climate change is that, as a father, I want them to find alternatives. You know, I mean, if we’re not there, we’re practically there.

I’ll drive you by somewhere real quick. There’s a school that used to be an all-black high school, for the area, not just for Baytown, many, many years ago, when — before, you know, the desegregation of schools. And that school, George Washington Carver, it was, at one time before — and this is before Exxon owned it. This is not Exxon’s fault. I mean, this is before Exxon bought this company out. They used to store a lot of their things in the ground. They didn’t have above-ground tanks; they had tanks in the ground. Well, one time, you know, I guess they shut down some of these tanks. They covered them up with dirt. Exxon bought one of the companies, and that land was donated to the school, to build this school, and the school was built. And then, after a while, the school — after desegregation, that high school was turned into an elementary. And we used to all go there, because in fifth grade they would take us swimming there because they had a swimming pool, because they had been a high school at one time. Well, one day in the '90s, a little boy was playing outside and noticed there was black stuff coming out of the ground. This is where the school was. This is all fenced in. This is where the stuff came out of the ground. What happened was, Exxon, that now owned that company that had put that stuff there, came in and took the land back. There's a historical marker in front of it, because it was a very successful African-American school. But nobody’s allowed on the property, and it sits right next to an African-American community.

There’s another community that’s directly in front of Exxon called Central Heights. That’s African-American. There’s an area that, when we were on 146 — I’m sorry, Expressway 30, there’s a community in front of that, in front of Exxon there, that’s predominantly Latino. It’s called Craigmont. And Lakewood’s kind of mixed, which is the one that had shelter in place. Wooster, what’s left of Wooster, is predominantly Latino. About three years ago, the area of Wooster had to go through a shelter in place because they had a pipeline leak. And the chemical that was released caused them to go to shelter in place. But back then — now we have really good, responsible — the city has been very responsible in issuing warnings and doing phone calls, and you can go to the city website. Back then, there wasn’t. It was kind of like a good lesson for us, because, as a city, we weren’t prepared, and a lot of people didn’t know that shelter in place had been issued for a pipeline release, for a leak.

Sometimes, when it rains especially, and we’ve had rain the last couple of days, you have a real strong smell and a strong odor. The flares will be on real high whenever we’re — whenever it rains or at night. You know, there’s one of the flares right now. This morning, when the incident happened, the flares were really strong. And, you know, when kids come out, they see — they see the flares. Flares are everywhere.

You know, when you look at it on a nationwide level, it’s not very fair that everybody else takes advantage of the fact that we produce gasoline here. You know, gasoline is really cheap in the United States. And it’s produced here and along the 225 Corridor, and other parts of the country don’t have to deal with things like these explosions. You know, they don’t have deal with things that might cause other health adverse effects on their bodies. 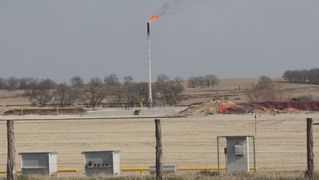