Image Credit: The Intercept
This is viewer supported news. Please do your part today.
Donate

In Brazil, federal prosecutors have filed a criminal complaint against journalist and Intercept co-founder Glenn Greenwald in connection to a major investigation he spearheaded that exposed misconduct among federal prosecutors and a former judge. Called “The Secret Brazil Archive,” the series of pieces published in The Intercept and The Intercept Brasil used a trove of documents to offer new and damning insight into the sweeping anti-corruption campaign that brought down former President Luiz Inácio Lula da Silva and paved the way for the election of right-wing President Jair Bolsonaro. The investigation used previously undisclosed private chats, audio recordings, videos and other information provided by an anonymous source to expose the wrongdoing of top officials, including Justice Minister Sérgio Moro, who oversaw the anti-corruption crusade known as “Operation Car Wash.” On Tuesday, a justice minister filed a denunciation of Glenn Greenwald, claiming he “directly assisted, encouraged and guided” individuals who allegedly accessed online chats related to Operation Car Wash. A judge will now decide whether to press charges. The move has sparked international outrage at what many are condemning as an attack on the free press in Brazil. We speak with Andrew Fishman, managing editor of The Intercept Brasil and reporter for The Intercept.

JUAN GONZÁLEZ: Well, we end today’s show in Brazil, where federal prosecutors have filed a criminal complaint against Pulitzer Prize-winning journalist and Intercept co-founder Glenn Greenwald in connection to a major investigation he spearheaded exposing misconduct among federal prosecutors and a former judge. Called “The Secret Brazil Archive,” the series of articles published in The Intercept and The Intercept Brasil used a trove of documents to offer new and damning insight into the sweeping anti-corruption campaign that brought down former President Luiz Inácio Lula da Silva and paved the way for the election of right-wing President Jair Bolsonaro. The investigation used previously undisclosed private chats, audio recordings, videos and other information, provided by an anonymous, source to expose the wrongdoing of top officials, including current Justice Minister Sérgio Moro, who oversaw the anti-corruption crusade known as “Operation Car Wash.”

AMY GOODMAN: On Tuesday, a justice minister filed a denunciation of Glenn Greenwald, claiming he, quote, “directly assisted, encouraged and guided” individuals who allegedly accessed online chats related to Operation Car Wash. A judge will now decide whether to press charges against Glenn. The move has sparked international outrage at what many are condemning as an attack on the free press in Brazil. In a statement, The Intercept said, quote, “The Bolsonaro government has repeatedly made it clear that it does not believe in basic press freedoms,” unquote. And Glenn Greenwald posted a brief video on Twitter Tuesday responding to the criminal complaint.

GLENN GREENWALD: A few facts about this criminal charge. First is that, as you probably know, the Bolsonaro government, President Bolsonaro, multiple members of his government, simply don’t believe in a free press. They don’t believe in press freedom. They don’t even believe in democracy. They’ve repeatedly and explicitly praised the military dictatorship that ruled the country until 1985 as a superior form of government. And this is all about ushering in that level of repression.

Secondly, the prosecutor who brought the charges just a couple of months ago unsuccessfully tried to bring similar charges against the head of the Brazilian Bar Association, who criticized Minister Sérgio Moro, and he tried to claim that that criticism constituted a crime in Brazil. And it was rejected by the courts. He’s obviously somebody abusing his prosecutorial power to punish the political enemies of the Bolsonaro government.

Third, the police — the Federal Police conducted a comprehensive investigation of our reporting, of our sources, and concluded, in a report published just a couple of months ago, that everything shows that I never committed any crime; much to the contrary, I always exercised what they called the highest level of professionalism, caution and responsibility in ensuring that I was doing my work as a journalist and never got anywhere near a crime.

AMY GOODMAN: Well, for more, we go to Rio de Janeiro, Brazil, where we’re joined by Andrew Fishman, the managing editor of The Intercept Brasil, reporter for The Intercept.

We welcome you to Democracy Now! Bolsonaro’s congressman son Eduardo tweeted, “Glenn Greenwald always said he loved Brazil and wanted to get know the country in depth. Who knows? Maybe he’ll even get to know prison.” Tell us how serious this situation is. What is a criminal complaint in Brazil?

ANDREW FISHMAN: Well, this is obviously a very troubling situation. It’s serious because this is the Public Ministry. This is not a joke that’s happening here. The complaint is that Glenn allegedly participated in a criminal hack of telephones of senior officials in the Brazilian government, in the Public Ministry. That’s obviously not true. He acted as a journalist. The alleged hack happened before anyone at The Intercept had any knowledge of what was happening. We had a source that came to us, an anonymous source, and presented us with very important information. And we, our team at The Intercept Brasil, which is, you know, 20-odd Brazilian journalists, along with Glenn and myself, have spent eight months working on 95 original stories that have revealed very serious wrongdoing and abuses by Judge — then-Judge Sérgio Moro, who’s now the justice minister, and the team of prosecutors that ran the Operation Car Wash anti-corruption investigation. And it’s very ironic that we spent all of our — these last eight months reporting on and exposing that the Public Ministry was willing to bend the rules to go against the standards that they needed to follow, to follow their own political purposes and make prosecutions based on a lack of evidence or faulty evidence or distorting the evidence, and in response to that, what they’ve done is made a criminal complaint against Glenn based on the distortion of the evidence for their own personal and political interests. So, it’s very troubling.

But the general response in Brazilian society has overwhelmingly been to condemn this action by the prosecutor. There has been an injunction by one of the Supreme Court ministers against any investigation into Glenn. And they claim that they didn’t investigate, but they’re still filing this complaint. And so, when he comes back from — when this minister comes back from vacation, it’s very likely that — he signaled that he might try to challenge it or bring this down. But now it’s up to a judge in Brasília to decide whether or not he’s going to accept the charges or not, in which case Glenn would become officially a defendant in this case.

JUAN GONZÁLEZ: And, Andrew, what about this original Federal Police investigation that concluded in December and found that there had been no crime committed by Glenn Greenwald specifically? How can the prosecutors then move forward? There’s already been an investigation that reached a different conclusion.

ANDREW FISHMAN: Juan, exactly. That’s a key issue here. The Federal Police spent many months doing an investigation into the alleged hacking. And they concluded, in their statement, which they released in December, that they saw no indication of any crimes committed by Glenn. And they went out of their way to say that, in fact, he was very cautious and careful to make sure to distance himself from any criminal activity. That was the conclusion of the Federal Police investigation. And then it went to the prosecutor at the Public Ministry. He decided to entirely ignore that conclusion. He evaluated the exact same evidence. There’s no new evidence in this case. He looked at the exact same evidence and said — decided to go ahead and file these charges against Glenn, which is exactly why you can see that everyone is up in arms about this decision. There’s no basis for it. It’s a complete distortion of the evidence.

It’s a 1,200-word conversation in which the alleged hackers are speaking to Glenn and saying, “We are not sure what to do here. Do we need to — do you want us to go for more evidence?” And he says, “Listen, I’m a journalist. I can’t direct you. I need to be very clear about that. But we have the — we have everything saved here, and so it’s up to you to decide what you want to do, but I don’t see any reason why you need to save the evidence.” And the reason why he says that, and he makes it clear in the conversation, is because he has the constitutional authority and the professional responsibility to defend his sources, to protect his sources. And that’s all that he was doing. And that’s what — legal analysts have looked at this chat, have said that’s exactly what he was doing. That’s the conclusion of the Federal Police, as well. But this prosecutor decided to take things in his own hands. He’s a very reactionary and activist prosecutor. He’s already been in trouble. And the administrative — the counsel within the Public Ministry is already looking into opening an investigation into the prosecutor.

AMY GOODMAN: Now, what Glenn and The Intercept Brasil exposed, Operation Car Wash, of course, ultimately led to the imprisonment of the — Operation Car Wash led to the imprisonment of the former president, Lula, who has since been released from prison, and his imprisonment prevented him from running for president. And he was clearly the front-runner, ahead of Bolsonaro, Bolsonaro very threatened by Lula. So, if you could address the significance of this? And also, of course, Glenn is an American citizen. Has the Trump administration, a close ally of Bolsonaro — Bolsonaro is called “the Trump of the Amazon” — has Trump and the White House weighed in?

ANDREW FISHMAN: I haven’t seen anything from Trump or the White House yet. Yeah, this is very, very — this is very, very serious. It’s a clear indication that the Bolsonaro — the Bolsonaro wave that’s happening in Brazil, which is similar to what’s happening in the United States, which is that there’s no longer any respect for the freedom of the press within the administration, and there’s many people that are following his lead, just like in the United States Trump sets the tone, and others follow suit. And that’s what’s happening here, as well. It’s a very troubling situation. And even if this accusation is to be rejected, it’s still — it’s a sign that Brazilian democracy is evermore fragile. And it’s something that all journalists need to be wary about, because the next journalist to be subjected to this sort of intimidation maybe won’t have the same fame and international platform and resources that Glenn has. And that’s a very important thing that we need to be paying attention to.

AMY GOODMAN: Well, we want to thank you so much for being with us, Andrew Fishman, managing editor of The Intercept Brasil, talking about what’s happened to Glenn Greenwald. A criminal complaint has been filed against him by the Brazilian government. We’ll follow details and let you know. 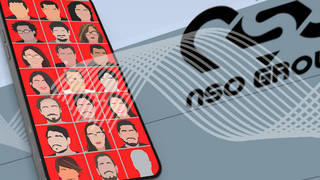