In Oakland, California, a months-long struggle between a group of unhoused mothers occupying a vacant home and the real estate firm that owned it ended with an unexpected offer to purchase the property earlier this week. The major win in the mothers’ fight against homelessness and real estate speculation comes just a week after Wedgewood Properties forcibly evicted the families — known as Moms 4 Housing — from the home they were living in for more than two months. Two mothers and two of their supporters were arrested in the early-morning eviction after armed police officers battered down the door. The heavily militarized action sparked widespread outrage and condemnation, and left the mothers and their families homeless once again. But on Monday — Martin Luther King Jr. Day — Wedgewood announced, under growing public pressure, that it would sell the property at a fair price through the Oakland Community Land Trust. The moms will then be able to purchase the house through the trust. We speak with Misty Cross, one of the members of Moms 4 Housing, and Carroll Fife, longtime organizer and director of the Oakland office for Alliance of Californians for Community Empowerment. “People are invested in a system that is broken,” Fife says. “It’s incumbent upon our legislators to listen to the moms, to listen to the people who have been part of these programs that are just broken, so we can do something different.”

AMY GOODMAN: This is Democracy Now! We end today’s show in Oakland, California, where a months-long struggle between a group of unhoused moms occupying a vacant home and the real estate firm that owned it ended with an unexpected victory for the mothers earlier this week: an offer for them to purchase the property. The major win in the mothers’ fight against homelessness and real estate speculation came just a week after Wedgewood Properties forcibly evicted the families, known as Moms 4 Housing, from the home they had been occupying for more than two months. The house had been vacant for two years. Police, sheriff’s deputies and a tactical SWAT team with a military robot laid siege to the house to arrest and evict the mothers in the early hours of the morning, while one of the moms was live on Democracy Now! from a studio in Berkeley. The heavily militarized action sparked widespread outrage and condemnation, and left the mothers and their families homeless once again. But on Monday, Martin Luther King Jr. Day, under growing public pressure, Wedgewood announced it would sell the property at a fair price through the Oakland Community Land Trust. The moms will then be able to purchase the house through the trust.

This is Carroll Fife, director of the Oakland office for Alliance of Californians for Community Empowerment, celebrating the news.

CARROLL FIFE: It’s important to understand the history of civil disobedience in this country, because every single right that we have today was won by people engaging and pushing on what was legal. Right? So it’s important to not criminalize women who are trying to bring attention and justice and humanity to the masses, for everyone. They are not the criminals here. The criminal system is one that allows homelessness.

AMY GOODMAN: Well, for more, we are joined by Carroll Fife live, of ACCE. She’s joining us again from Berkeley, California, alongside Misty Cross, who’s back with us, one of the members of Moms 4 Housing. We just had them on last week following the eviction.

Welcome back to Democracy Now! Misty, explain what happened.

MISTY CROSS: Between the agreement?

MISTY CROSS: Or what part?

AMY GOODMAN: Yes. If you could explain — I mean, you were evicted from the house, battering ram, SWAT team, arrested, and now Wedgewood Properties, which owns the house, is saying you can buy it through the land trust?

MISTY CROSS: We’re still skeptical of that. We’re still in negotiations with that. Even though we are glad that Wedgewood wants to come forth and do the right thing, we’re still skeptical on how this whole agreement came into play. It went on with our mayor, Libby Schaaf, behind closed doors. We still don’t understand what the agreement was that brought them to the table, being as that we had City Council Representative Rebecca Kaplan and Nikki Bass to help negotiate agreements through the land trust from the beginning. So we’re still skeptical of what Wedgewood really wants to agree on and why are they now trying to settle things, after all of this trauma has been caused to us.

AMY GOODMAN: Carroll Fife, you’re the director of ACCE. You’re an organizer, educator, mother, have lived in the Oakland community more than 20 years. Can you explain what exactly has been offered and what this land trust is?

CARROLL FIFE: Sure. The one demand that the moms had was to negotiate with the Oakland Community Land Trust. Since day one, November 18th, the position was that the organization, Wedgewood, that purchased this home in a foreclosure sale, sit down and negotiate for the sale of the house to the land trust so it would be permanently affordable.

And so, after the pressure — and I think it was the militarized response by Alameda County sheriffs — it was too much to bear, not only for Wedgewood, but also for our mayor, who had been silent on this issue up until then. We feel like it was all of that combined — the political pressure, the visible media — that made the parties want to come to the table, and also the moms calling out the governor for doing a homeless tour, bringing in trailers to address the crisis, 13 to 20 trailers to deal with the crisis, that really caused them to want to come to the table and negotiate.

But we’re getting word that Wedgewood may be getting cold feet on the offer, and they may be trying to do improvements to the property so they can sell it to the land trust for market rate, which is not what the moms are working to negotiate. They want to make sure that Wedgewood sells it to the land trust for no more than what they purchased it for. And so, if they are engaging in doing any repairs, we’re concerned that they may want to increase the sales price. And that’s just not — that’s just not tenable.

AMY GOODMAN: Very quickly, Misty, describe what happened on that morning. In fact, we had Carroll on as the raid went down, the battering ram, the robot, the SWAT team. You were inside?

MISTY CROSS: Yes, I was inside. It was a bunch of mixed feelings going on at that time. You really couldn’t put it all in one emotion. It was a lot of mixed feelings — scared, afraid, don’t know if they were just going to come straight in with the guns. We were upstairs. We weren’t downstairs where the front door was, so we didn’t want to come running down and run into gunfire. Just a lot of things ran through our mind at that time. But our main thing was to remain calm and to keep addressing that we weren’t going to be violent and that this was a civil disobedient act and that we weren’t going to be aggressors in this particular moment.

AMY GOODMAN: And you are where now? Talk about where you, the other moms and the kids are living now.

MISTY CROSS: Me and the other moms are all working towards permanent housing. We should all be good and settled before the beginning of February. But we’re all working towards that goal. Our main thing is to be able to get stable so that we can be mobile a little bit more in this movement, so that we can get on the ground and really do the footwork that needs to be done in holding people accountable for sending in the aggressive force on the mom and children at that time.

AMY GOODMAN: Carroll Fife, as we wrap up the show, can you talk about what this possible agreement could mean for the issue of homelessness, not only in Oakland — I mean, we were just there doing a special, at least 90 encampments, growing every single day, San Francisco, Los Angeles. It’s ground zero for homelessness in this country. What this could mean for unhoused people and for the issue of homelessness in the United States? Do you see this as a model?

CARROLL FIFE: Oh, absolutely. Absolutely. But it will be a fight. I’ve seen on social media that, to the privileged, equity feels like oppression. So, because this country has conditioned people to believe that property rights are more important than human rights, it’s definitely going to be a fight. But I think this step towards a victory with Moms’ House is an example that can be duplicated, not only in the Bay Area, but across the country, which is why we’re fighting to expand the right to housing throughout the state of California with an amendment to the Constitution. So, it’s going to take all hands on deck, all grassroots, people-powered organizations, to get on board and help us with this fight.

AMY GOODMAN: And what about the tech companies, that are driving up prices in San Francisco, real estate prices, saying they’re pouring hundreds of millions in dollars to help people around housing? How is it that you still have this growing homelessness problem? And do you think that is helpful or that the state has to be completely involved here?

CARROLL FIFE: The state definitely has to be involved. And the money that’s pouring into these programs are for homeless like sustenance programs. They’re not transitioning into permanent housing. And Misty and Tolani and Dominique are all examples of 211 and all of these different programs not working. Wages have not kept pace with inflation. People are invested in a system that is broken. And so, it’s incumbent upon our legislators to listen to the moms, to listen to people who’ve been a part of these programs that are just broken, so that we can do something different. If we do not address the entirety of the problem, then it will only persist. We have to address the fact that income inequality is growing, but rents keeps going up, the price of homes keep rising — keeps rising. So, if we’re not addressing the entire issue, then we’re just putting Band-Aids on bullet wounds. And it has to stop.

AMY GOODMAN: I want to thank you both so much for being with us, Carroll Fife, director of the Oakland office for Alliance of Californians for Community Empowerment, and Misty Cross of Moms 4 Housing. You can see all our coverage of this issue at democracynow.org. I’m Amy Goodman. Thanks so much for joining us. 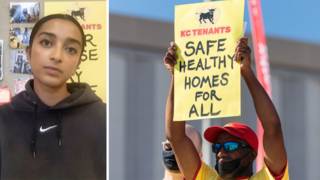