Mehdi Hasan: The Impeachment Trial Has Been a Farce Since Day One Filled with GOP Lies

At the Senate impeachment trial of President Trump, Senate Majority Leader Mitch McConnell told fellow Republican senators in a private meeting Tuesday that he does not yet have enough votes to block Democrats from calling impeachment witnesses. Democrats have pushed for former national security adviser John Bolton to testify. On Sunday night, The New York Times published details about a draft of Bolton’s forthcoming book, in which he claims Trump personally told him in August he wanted to maintain a freeze on $391 million in military aid to Ukraine until Ukraine turned over materials related to former Vice President Joe Biden. On Tuesday, Trump’s defense team wrapped up their opening arguments. We speak with Mehdi Hasan, senior columnist at The Intercept and host of “UpFront” on Al Jazeera English. John Bolton’s role in the impeachment trial is “hugely ironic, because we’ve always known that John Bolton wanted regime change around the world; I just didn’t realize he wanted regime change in Washington, D.C.,” Hasan says.

AMY GOODMAN: We continue with Mehdi Hasan of The Intercept, talking about the Senate impeachment trial of President Trump. On Tuesday, Senate Majority Leader Mitch McConnell told fellow Republican senators in a private meeting he doesn’t yet have the votes to block Democrats from calling impeachment witnesses. Democrats have pushed for former national security adviser John Bolton to testify. On Sunday night, The New York Times published details about a manuscript of Bolton’s forthcoming book, where he claims Trump personally told him he wanted to maintain a freeze on $391 million in military aid to Ukraine unless Ukraine turned over materials related to his political rival Joe Biden. On Tuesday, Trump’s defense team wrapped up their opening arguments. Trump’s lawyers, including Jay Sekulow, repeatedly tried to dismiss the reports about Bolton as “allegations.”

JAY SEKULOW: The trial of the leader of the free world and the duly elected president of the United States, it is not a game of leaks and unsourced manuscripts. That’s politics, unfortunately. And Hamilton put impeachment in the hands of this body, the Senate, precisely and specifically to be above that fray.

AMY GOODMAN: The impeachment trial continues today for a phase where senators will have 16 hours to ask questions to the House impeachment managers and the president’s legal team, though they can’t do it directly.

To talk more about impeachment, we’re still with Mehdi Hasan in Washington, senior columnist at The Intercept and host of the Deconstructed podcast, also host of UpFront at Al Jazeera English.

So, it looks like the vote will come on Friday on whether there will be witnesses. You have President Trump’s former Chief of Staff General John Kelly, not always a fan of John Bolton, essentially calling Trump a liar, saying he believes what John Bolton is saying, that he directly told Bolton that he was withholding the aid to Ukraine to get them to investigate his political rival Joe Biden. Talk about the significance of what’s happened so far.

MEHDI HASAN: Yeah, it’s very significant, in the sense, Amy, that it’s yet another reminder that Donald Trump is a liar, as you mentioned John Kelly calling him a liar. He’s lied this morning on Twitter. He’s just put out a couple of tweets in which there are multiple lies, claiming that, you know, witnesses are only for the House, not the Senate, which is not true, and other multiple false statements. So it’s not only significant in that it’s a reminder that the Trump administration and the GOP in the Senate and the House are lying to us about all of this, but it’s also a reminder about how this trial is not really a trial, because it doesn’t involve any witnesses at the moment.

There have been 15 impeachment trials in the Senate since the beginning of the United States. That’s including judges, not just two presidents, Andrew Johnson and Bill Clinton. In every single one of those 15 impeachment trials, there have been witnesses. At the Bill Clinton impeachment trial, in which Mitch McConnell was involved, there were three witnesses: Monica Lewinsky, Sidney Blumenthal and Vernon Jordan. The idea that you can have a trial without any witnesses, I think, is absurd. I think even the average American, even a Republican, would accept that that premise is absurd, the idea that you have a trial, but there are no witnesses. The idea that you have a trial in which jurors, because that’s what the Republican senators are, are going on the record saying, “We’re coordinating with the White House; we have no interest in being fair or impartial,” as Mitch McConnell and Lindsey Graham have said, that would not happen in any other trial. So this whole trial has been a farce since day one. You mentioned Jay Sekulow. He’s been lying to us since day one, lying about the entire process. Multiple factually inaccurate statements put forward — and fact-checked in real time — by the Trump legal team.

And now you have this John Bolton revelation, which is hugely ironic, because we’ve always known that John Bolton wanted regime change around the world; I just didn’t realize he wanted regime change in Washington, D.C. And he’s come out with this book, that, you know, is going to come out in a few weeks — The New York Times got hold of an unpublished manuscript — in which he basically says, “The president told me, 'Hold back military aid until we get these investigations into the Bidens from the Ukrainians.'” Now, what’s so interesting, Amy, is that the Trump legal team’s argument has been, “We have not heard a single fact witness testify that this happened,” which is a kind of chicken-and-egg situation, because you need to let John Bolton testify, and then you will have a fact witness who says that this happened. So the whole Republican strategy has been, “We can’t allow witnesses to come forward and say what happened,” but at the same time they’re saying, Amy, “There are no witnesses who have come forward and said what happened.” They want to have their cake and eat it, which is bizarre and dishonest.

AMY GOODMAN: Can you talk about the division in the Republican Party, the significance of — we’re broadcasting here from Utah — of Utah’s junior senator, Mitt Romney, saying he’s definitely calling for witnesses? And then you’ve got Susan Collins, who often makes noises but then usually sides with the president.

MEHDI HASAN: I think you put your finger on it there, Amy, when you said, “Susan Collins, who usually kind of makes these noises and then sides with the president.” That’s a pretty accurate description of every, quote-unquote, “moderate Republican” in the era of Trump. We’ve seen this script before, where they make all the right noises, so the media take them seriously. You saw last week Murkowski and Collins and others coming out and saying, “Oh, we were hearing out the House managers, and then Adam Schiff said something mean about heads on pikes, and now we might not — now we’re not listening to him anymore.” You know, it’s childish behavior. It’s cynical and self-serving behavior.

For me, I would advise everyone at home and all of my journalistic colleagues, in this town and elsewhere, not to fall for the same trick again. We saw this during the Brett Kavanaugh impeachment hearings, Amy, where people came out and said — you know, Jeff Flake. Do you remember Jeff Flake, the great moderate Republican senator? You know, they came out and said, “Let’s have an FBI investigation,” which wasn’t really an FBI investigation. It was just a fig leaf of an investigation, but it enabled people like Flake to say, “Look, we’re open-minded. We’re listening to the evidence. We’re not just being Trump shills.” And I think that’s the case with all of these Republican senators. Mitt Romney has a long history of talking a good game and then getting behind Trump when he has to. And I just don’t think they are actually going to vote for witnesses. I don’t think that Mitch McConnell is going to lose this vote.

But you know what? I do think that Democrats should come out and call the Republican bluff. I’ve been saying this for a while, Amy. Come out and say, “Yes, you want Joe Biden? Have Joe Biden. You want Hunter Biden? Have Hunter Biden. You know, you want the House managers’ Uber drivers? You can get them to testify, as well. Have whoever you like, but give us John Bolton. Give us Mick Mulvaney. Give us people close to the president who were part of the conversations in which the president did all of this stuff that he claims he didn’t do.”

AMY GOODMAN: Mehdi Hasan, we want to thank you for being with us, senior columnist at The Intercept, host of the Deconstructed podcast, also host of UpFront at Al Jazeera English.

This is Democracy Now! Of course, we’ll continue to cover the Senate impeachment trial. We stream it every day at democracynow.org. I’m Amy Goodman. Coming back, we go to South Dakota. Stay with us. 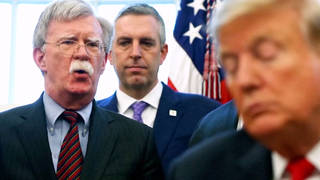