Dominique “Rem’mie” Fells, Nina Pop, Marilyn Cazares, Tony McDade — just a few of the names of the 37 transgender and gender nonconforming people violently killed in 2020, the deadliest year for trans and gender nonconforming people on record, this according to a new report from Human Rights Campaign. It’s the highest number of deaths since the HRC started recording and reporting this type of violence in 2013. Twenty-two of those who were killed were Black; seven were Latinx.

Human Rights Campaign Foundation president Alphonso David said, quote, “This grim milestone proves what we have long known: this violence is an epidemic. Each one of the lives we lost was someone ripped from their family, their friends and their community by an act of senseless violence, often driven by bigotry and transphobia and inflamed by the rhetoric of those who oppose our progress,” he said.

More than 200 trans and gender nonconforming people have lost their lives to violence since 2013. Two-thirds of those killed have been Black women.

For more on this devastating study, we go to Atlanta, Georgia, where we’re joined by Tori Cooper, Human Rights Campaign director of community engagement for the Transgender Justice Initiative.

We welcome you to Democracy Now!, Tori. Start off by talking about what you found in this devastating report.

TORI COOPER: Good morning, and thank you so much for having me.

JUAN GONZÁLEZ: And these numbers, Tori, are likely an underreport of the deadly violence targeting transgender and gender nonconforming people. Could you talk about how police actually are cataloguing these and reporting these?

TORI COOPER: So, as a Black trans women, many of us in the community believe these numbers are terribly low. And in part it’s because police will tell a story, they will talk about a death in a way that’s truthful — and by “truthful,” I mean perhaps the person’s legal identification still has an “M” versus an “F” — and so, they’re telling stories truthfully, but they’re not telling stories not accurately, when they discount or, what we call, deadname people and use them by their birth name rather than their chosen name. We know that this happens, and this is a separate issue. There are legal consequences to this. Certainly, there are reporting consequences, as well. But we believe that that’s one of the things that contributes to terribly low numbers and inaccurate counts. And then, in addition to that, families are not always as welcoming and understanding about a person’s gender identity. So that certainly plays a part in getting an accurate — a more accurate count, as well.

AMY GOODMAN: Tori, if you could talk about that point you first made? You said “killed by people they know.”

TORI COOPER: So, I use the word “relationship.” Yes, what we have found out is that the majority of the Black and Brown trans women who have been killed this year, Black and Latinx, they had some kind of relationship with the person. It may have been a social media person. There was one or two accounts where folks are believed to have been killed by people they went to school with and perhaps had lost contact with over a number of years. So they were in some relationship, the social media. They could have been in an amorous relationship, boyfriend-girlfriend relationship. Whatever the relationship, there was some way that they knew each other prior. And as trans women, particularly as Black trans women, if we cannot trust people that we know and that we’re in relationship with, then it really takes away all sense of safety, and it makes us feel even more vulnerable.

JUAN GONZÁLEZ: Could you talk about the case of Iyanna Dior, a Black trans woman who was brutally beaten by a mob in Saint Paul, Minnesota, back in June? How often are these — are these situations even investigated? And are some trans people often afraid of reporting such attacks to the police?

TORI COOPER: Iyanna Dior’s case is, unfortunately, not as uncommon as we would like to think. And now, I do not know her personally, so I will make sure to say that, but I did reach out to her several times, and we communicated, and through my work at HRC, as well.

But with Iyanna Dior’s case, from my understanding, there was a simple small tap of a car vehicle, and that escalated into basically a group jumping on her and beating her up inside of a store. Not only was she not protected by the folks who worked at the store, but as folks realized her gender identity, more and more folks ganged up on her, really for no reason at all.

And what that is, is it’s kind of emblematic, symbolic of how we, as trans and gender nonconforming folks — how we’re kind of ganged up on in society. This young lady appeared to be minding her own business. It was an accident, a small accident, that didn’t create any significant damage. And yet these folks, not only did they beat her up gang style — they just ganged up on her — but then they videotaped it and played it on social media for others’ entertainment. As trans people, we feel that our lives are displayed and our victimization is displayed for other people’s entertainment all the time.

JUAN GONZÁLEZ: Could you talk about the role of the media and how we could have a more positive impact on combating these incidents of violence?

TORI COOPER: Significant role of the media. Quite often what has happened is the media talks about trans and nonconforming people when we’re celebrities or when we’re dead. And the truth is, most of us lie in extremes — from somewhere in between those two extremes. And so, it is important for the media not just to tell — as with any other marginalized group, may I add that also. It’s important that the media tell our stories in a way that is truthful and accurate. It is important that the media counteract some of the negative imagery around us by telling stories that uplift our community, that provide a more holistic view of who we are — I like to say, that add color to the picture of trans and nonbinary people. That’s really, really important.

AMY GOODMAN: Finally, Tori, Sarah McBride is a trans woman who was elected to the Delaware state Legislature, might be the first trans — openly transgender state senator in the United States. She wrote a book about her life experience. Her book is called Tomorrow Will Be Different: Love, Loss, and the Fight for Trans Equality, and it has a foreword by Joe Biden, the new president-elect of the United States. Can you talk about what you want to see this new administration do, and what you think the old one — the effect of Trump?

TORI COOPER: So we’re incredibly proud of her — state legislator, thank you. So, she is — we are very, very proud of her at the Human Rights Campaign, and also proud of her in the trans community.

So, what we expect from her as part of the Legislature, and also from the Biden-Harris administration, is really to hold them accountable. Joe Biden, in a recent speech, was the first to acknowledge transgender folks. Joe Biden released a statement on Transgender Day of Remembrance, which was November 20th. And so, we believe that we now — beginning in January, will now be under the administration that is the most supportive of trans, nonbinary and all other queer folks.

AMY GOODMAN: We’re going to have to leave it there, Tori. Thanks so much. Human Rights Campaign director of community engagement. I’m Amy Goodman, with Juan González. 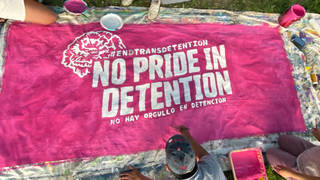