One of the crucial states that could decide the presidential election is Arizona, where Joe Biden is leading Donald Trump with thousands of ballots left to count. Trump won Arizona in 2016, and if Biden’s lead holds, he will be just the second Democratic presidential candidate to win the state since 1948. “The lion’s share of the credit belongs to sustained community organizing in the state,” says Marisa Franco, director and co-founder of Mijente, a national digital organizing hub for Latinx and Chicanx communities. She says the Trump administration has been disastrous for immigrants and immigrant rights groups, and a second term would be even worse. “A shift in administration would give us a fighting chance,” she says.

AMY GOODMAN: This is Democracy Now!, democracynow.org, The Quarantine Report. I’m Amy Goodman, with Nermeen Shaikh, as we turn to the presidential race in Arizona, where Joe Biden is leading Donald Trump by more than 68,000 votes, with 86% reporting. The Associated Press and Fox News have called the state for Biden — and they did that over a day ago — but other outlets, including CNN, have yet to declare a winner. Biden’s lead narrowed early Thursday morning when Arizona announced results of a batch of mail-in ballot, mainly from Maricopa County, which includes Phoenix. Counting the remaining votes could take several days.

Several hundred Trump supporters gathered outside the Maricopa County election center last night, chanting “Count the vote.” Many of the protesters were openly carrying AR-15 assault rifles and other guns. Donald Trump won Arizona in 2016. So, they were [chanting] “Count the vote,” and that’s opposed to the group, what Donald Trump Jr. has referred to as the army of supporters, that were outside a Detroit counting center, where Trump was ahead in Michigan, and they were saying “Stop the vote” as they stormed into a counting center. But in Arizona, where they were behind, Trump insisted they count every vote.

Now, if Biden’s lead holds in Arizona, he’ll be just the second Democratic presidential candidate to win the state since 1948. Arizona’s blue shift is in large part due to a decade of grassroots organizing, particularly in Latinx communities against Arizona’s anti-immigration policies and Maricopa County’s infamous former Sheriff Joe Arpaio.

Meanwhile, in a closely watched Senate race, Democrat Mark Kelly, the astronaut and the husband of Gabby Giffords, the congressmember from Tucson who was shot in the head — yes, Mark Kelly has unseated Arizona Republican Senator Martha McSally.

We go now to Phoenix, where we’re joined by Marisa Franco. She’s co-director and co-founder of Mijente, which means “my people,” a national digital organizing hub for Latinx and Chicanx communities, which this year has led a national campaign to mobilize Latinx voters.

Welcome back to Democracy Now!, Marisa. Talk about the significance of what’s happening right now in Arizona, the explosion of the Latinx vote.

MARISA FRANCO: The lion’s share — I think the first thing to say is that the lion’s share of the credit belongs to sustained community organizing in the state. The other night, you know, all of us were watching. It was — I think, probably like many of you all, we were having this feeling of doom, of 2016. And 2016, we had this moment of like — it was bittersweet, right? We finally took Sheriff Arpaio out of office, but, really, you know, as soon as that was announced, it was very clear that Trump was going to win the election. And so, as we waited for the results this year and we heard about Florida, we heard about — you know, we started seeing the numbers coming out of Ohio and coming out of the Midwest, it felt really good this year to have our state be a shot in the arm. We were very excited about the results.

At this point, we are still awaiting what the results are at the top of the ticket, but we have won seats at the county Board of Supervisors. The Red for Ed ballot initiative won. We’ve elected, it looks like, a progressive county attorney in Julie Gunnigle, and just continue to see a shift in the state. And I think it’s important to name that it’s a shift that comes at the efforts of many, many people. It is sustained community organizing. And it’s an embracing of a multiplicity of strategies. This is just as much owed to the people that took to the streets in protest, the people that called for boycotts, as much as it is the people who knocked hundreds of thousands of doors to register and mobilize voters.

NERMEEN SHAIKH: And, Marisa, what do you think accounts for the difference in Arizona compared to other states when it comes to Latinx voters? Is it this organizing that you’re speaking of?

MARISA FRANCO: Absolutely. And, you know, Juan was after my own heart in your last segment, because he’s naming numbers that are astounding. Our community, the main story of this election, in reference to Latino voters, is that we came out. We showed up, and we showed out, the vast majority rebuking and rejecting the Trump agenda. Arizona is one example of how that’s done. I think it’s an example that can be replicated.

I think we should not take for granted that this means that Arizona will always be blue or Latinos will always come out. And frankly, that’s something the Democratic Party does pretty often. Our community is an afterthought, and there isn’t a substantive effort to think of how — what are the kind of issues that matter to us, how can we be engaged in a meaningful way, how are we involved in decision-making and leadership of political campaigns, and often are getting the very short end of the stick on resources, as well.

And so, frankly, you know, you could probably look at a lot of different examples. Arizona is one of them. And the Arizona example, I think it really demonstrates that consistent, sustained organizing is really critical for the community to actually feel that something is changing and that they have a role in it.

NERMEEN SHAIKH: And, Marisa, can you talk about the significance — and we don’t know the results yet of the election, but what’s at stake on immigration issues, in particular, now?

MARISA FRANCO: It’s big. You know, we were really clear in our organization when we engaged in the endorsement process and we decided to participate in this election in a more active way. We made it very clear we were not picking our savior; we were picking our target.

For immigrants and the immigrant rights movement across the country, these have been very difficult times. We’ve seen our advances dismantled or attempted to be dismantled, and there’s been very little opportunity to have anything positive or progressive. Immigrants are largely under attack. You know, the numbers, but the conditions, it’s just, I think — it’s been one of the things that the Trump administration is most focused on in this first term. We can only expect in this first term they were understanding that they would have to face reelection. I think we don’t want to imagine what they’re going to do in the second term. A shift in administration would give us a fighting chance. It would give us a fighting chance to advance the campaigns and causes that we need in terms of immigration and addressing deportations.

AMY GOODMAN: Can you talk about some of the sheriff’s races, Marisa, that you’ve been following? And though you’re based in Arizona, you work everywhere, from Arizona to Georgia.

MARISA FRANCO: Yeah. Georgia, in particular, folks in Georgia organized, mobilized, so we’re still waiting for the results of the presidential election. But immigrants in the state of Georgia have faced — it’s almost a tradition in the Georgia state Legislature, similar to what’s happened here in Arizona — it’s almost tradition to pass anti-immigrant laws every year, year after year, year after year; politicians who think they can make a name by disparaging us. And now this is the second cycle where people have come together to mobilize voters. Two sheriffs have been knocked out, in Gwinnett and Cobb County. These are sheriffs that have promoted the 287(g) program, which has long been a program that fuses local police with immigration enforcement and has been a catalyst to deportations. It’s a huge victory. We’re really proud.

AMY GOODMAN: Final words, 30 seconds, Marisa, on this cusp of the announcement of the president, which may come later today?

MARISA FRANCO: Yes. I want — like, as we await these results, Trump and his supporters are showing who they are. In one place, they say to count the votes; in one place, they say to stop it. We must not give them a lifeline to relevance. We must not try to think that we’re going to be able to just come and counter them. They cannot play the same plays. They cannot sue their way into the White House. Our movement needs to hold steady that we need to count the votes. We are confident that we voted him out. And if we need to walk him out of that White House, we will. Let’s hold down. Let’s hold steady. Let’s not give Trump supporters a pathway to any form of moral high ground. They are showing us who they are. They’re showing everyone who they are. And let the world see it.

AMY GOODMAN: Marisa Franco, thanks so much for being with us, director and co-founder of Mijente, a national digital organizing hub for Latinx and Chicanx communities, which this year has led the national campaign called Fuera Trump to mobilize Latinx voters.

This is Democracy Now!, democracynow.org. When we come back, we go to one of the first two openly gay Black congressmembers-elect in this country. Stay with us. 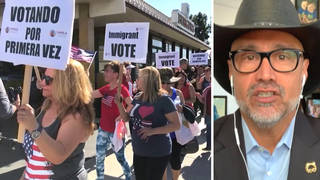