As President Trump continues to look for ways to overturn the 2020 election, he has also continued to raise massive sums of money — over half a billion dollars since mid-October, including more than $250 million since Election Day. The New York Times reports more than $60 million of what Trump raised has gone to a new political action committee that he will control after he leaves office, an unprecedented war chest for an outgoing president. There are few legal limits on what Trump can do with the raised funds, and he could use it to pay off his massive $420 million debt or to fund a potential 2024 run. “This is entirely unprecedented,” says Brendan Fischer, director of federal reform at Campaign Legal Center, who has been closely following Trump’s fundraising since the election. “It’s a loosely regulated political vehicle that Trump can tap into after he leaves the White House to retain influence in the Republican Party and also to potentially benefit himself and his family financially.”

As President Trump continues to look for ways to overturn the 2020 election, he’s also continued to raise massive sums of money — over half a billion dollars since mid-October, including more than $250 million since Election Day alone. Trump’s largest single days for online donations actually came after Election Day. On November 6th, he raised nearly $750,000 per hour.

The New York Times reports that more than $60 million of the money he’s raised has gone to a new political action committee that Trump will control after he leaves office. For a sense of the scale, this is about as much money as Trump spent to win the Republican presidential nomination in 2016.

The Times report opens, quote, “Donald J. Trump will exit the White House as a private citizen next month perched atop a pile of campaign cash unheard-of for an outgoing president, and with few legal limits on how he can spend it.” The Times also documents how Trump’s new PAC, called Save America, has actually been receiving nearly all of the money he gathered from supporters who donated to what was billed as a Georgia election fund to fight the two runoff Senate races there. Neither Republican senator on the ballot will get the money. Will Trump use the money to pay off his massive $420 million debt or to fund a potential 2024 run?

For more, we go to Brendan Fischer, director of federal reform at Campaign Legal Center. He’s been closely following the money Trump has been raising since the election.

Welcome to Democracy Now! This is an astounding story. For people who are looking at what he’s doing and saying, I mean, is it total madness, as he continues to allege electoral fraud, taking case after case to federal courts and the Supreme Court, as — what? — close to 50 cases have been thrown out of court? Even the Trump-allied judges are saying no to him. He won’t accept it. Is this madness? Or is it that every time he does this, he has another incentive and fundraising letter to say, “Let’s fight the fraud,” though, ultimately, that money goes into his pocket, Brendan Fischer?

BRENDAN FISCHER: That’s right. I think it’s fair to say that this is entirely unprecedented. You know, typically, after a president leaves office, he fades into the background. He begins to focus on writing his memoirs, setting up his presidential library. But Trump has been on a fundraising tear since Election Day, asking for donations to an election defense fund or to support the Senate races in Georgia.

But most of every donation has instead gone to his new leadership PAC, Save America. And Save America is not financing any of Trump’s post-election litigation. It is not financing the Senate races in Georgia. Instead, it’s a loosely regulated political vehicle that Trump can tap into after he leaves the White House to retain influence in the Republican Party and also to potentially benefit himself and his family financially.

JUAN GONZÁLEZ: Well, could you talk about that, the potentially benefiting himself and his family? Because most people are not aware that when you have campaign cash — first of all, he has not declared himself a candidate, so that if he did, he would have to then — he would then have to have more restrictions on how he could use money. But could you talk about the potential ways that he could directly benefit, that this could become the ultimate grift here, on his way out the door?

The key distinction between Trump’s campaign funds and the funds held in Save America are that Trump campaign funds cannot be used for personal expenses, but the Federal Election Commission has not interpreted that personal use ban to apply to a candidate’s leadership PAC, which opens up all sorts of different ways that Trump could potentially use his leadership PAC funds to benefit himself or his family financially. He could pay himself a salary. He could put Tiffany Trump on the payroll. He could buy enough copies of Don Jr.’s book to put it on the New York Times best-seller list. He could rent out entire floors at Trump Hotel. There are really very few limits as far as the way that the FEC has interpreted this law.

JUAN GONZÁLEZ: And what about Trump’s MAGA PAC?

MICHAEL COHEN: I think what’s really bothering him the most, though, is that Trump has over $420 million in outstanding loans that are coming due. Now, in the event that there is a potential tax liability for the time period that they’re talking about, I mean, it could be hundreds and hundreds of millions of dollars. If you add those together, I mean, he’s very — I mean, very realistically facing a potential bankruptcy. … He’ll find some corrupt foreign entity to help him out of the situation.

AMY GOODMAN: So, he can either find a corrupt foreign entity, as Michael Cohen says, or he can just send out these fundraising letters, sometimes a number a day, and raise the money he needs. He leaves, when he is no longer president, also presidential immunity, leaving himself open also to lawsuits, which might explain some of these astounding meetings he’s having at the White House right now, back with, for example, Sidney Powell, who they just forced out because of her outrageousness and unfounded conspiracy voter claims, possibly talking about making her some kind of special counsel on electoral fraud, but also talking with people like the man he just pardoned, the general, Michael Flynn, talking — he’s pushing for martial law, so that Trump doesn’t have to leave office. Can you explain what happens after he leaves and what kind of accountability there is for the money, and what needs to be done to change the entire system? Because it’s not only President Trump that could take advantage of this.

BRENDAN FISCHER: Yeah, you know, and the phenomenon of scam PACs are not entirely new. There is an entire bipartisan industry of shady political operators using incredibly misleading fundraising appeals to ask people to donate money that is not actually going towards the purposes for which people donate. But it’s rare to see such misleading appeals coming from a candidate, much less the incumbent president. You know, campaign finance law really does not look at the veracity of fundraising appeals.

Where there could be some movement is with the FEC and extending the ban on the personal use of campaign funds to leadership PACs. We have a pending rule-making petition with the FEC, asking it to clarify that a candidate or a politician, like Trump, cannot convert leadership PAC funds to his own personal use.

JUAN GONZÁLEZ: There’s one Trump donor, the North Carolina businessman Fredric Eshelman, who sued the campaign to recover his $2.5 million donation, citing, quote, “disappointing results” in these lawsuits. Do you think there might be other such lawsuits? And do they have any chance of winning?

You know, I think a distinction between where a lot of the money is coming from for Trump’s leadership PAC and Eshelman is that a lot of the money for Trump is coming from small donors, from people who may not have the resources to sue Trump or to really even identify that their money is being misused. And again, I think that’s part of what’s unique about this, because, typically, candidates have an incentive to maintain a level of trust with their supporters. They might use inflammatory fundraising appeals, but they want to —

BRENDAN FISCHER: — maintain a level of trust so people keep giving. You know, of course, Trump is the person who said he could shoot somebody on 5th Avenue and still maintain a level of support. And this post-election fundraising might just be the political version of that. 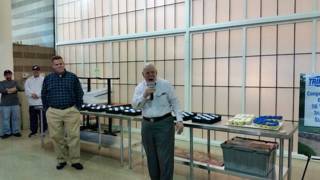