Senator Bernie Sanders of Vermont has won the New Hampshire primary a week after he won the popular vote in Iowa. As of Wednesday morning, with 89% of precincts reporting, Sanders has 25.8% of the vote, narrowly beating former South Bend Mayor Pete Buttigieg, who is at 24.4%. Senator Amy Klobuchar placed third with nearly 20% of the vote. Both Senator Elizabeth Warren and former Vice President Joe Biden received under 10% of the vote, after seeing their support plummet in recent weeks and months. At a celebration in Manchester, Bernie Sanders said his victory in New Hampshire is the beginning of the end for Donald Trump. As the results of the New Hampshire primary came in, two more Democratic candidates dropped out: Senator Michael Bennet of Colorado and entrepreneur Andrew Yang, who campaigned for a universal basic income. For more on the New Hampshire primary and what comes next in the presidential race, we speak with John Nichols of The Nation.

AMY GOODMAN: Senator Bernie Sanders of Vermont has won the New Hampshire primary a week after he won the popular vote in Iowa. With 87% of precincts reporting, Sanders has 25.7% of the vote, narrowly beating former South Bend Mayor Pete Buttigieg, who is at 24.4%. Senator Amy Klobuchar placed third with nearly 20% of the vote. Both Senator Elizabeth Warren and former Vice President Joe Biden received under 10% of the vote, after seeing their support plummet in recent weeks and months. On Tuesday, Biden cancelled his election night party in New Hampshire and headed to South Carolina, which holds its primary on February 29th.

At a celebration in Manchester, New Hampshire, Bernie Sanders said his victory in New Hampshire is “the beginning of the end for Donald Trump.”

PETE BUTTIGIEG: And here in a state that goes by the motto “Live Free or Die,” you made up your own minds. You asserted that famous independent streak. And thanks to you, a campaign that some said shouldn’t be here at all has shown that we are here to stay.

AMY GOODMAN: As the results of the New Hampshire primary came in, two more Democratic candidates dropped out: Senator Michael Bennet of Colorado and entrepreneur Andrew Yang, who campaigned for a universal basic income.

We go now to Manchester, New Hampshire, where we’re joined by John Nichols of The Nation, where he’s covering the race.

Welcome back to Democracy Now!, John. So, summarize what happened. Yes, at this point, the latest news, Bernie Sanders has won the New Hampshire primary.

JOHN NICHOLS: That is correct. And it was a significant win. I know you’ll hear a lot of punditry today that says that he didn’t win by as much as he did in 2016. But the fact of the matter is that in an intense race where the lead moved among many candidates in the polls over the last several months, when all was said and done, Bernie Sanders prevailed. He prevailed because, again, as in Iowa, he had a significant — actually, a huge victory among young voters. In towns like Durham, New Hampshire, and Keene, it was clear that their votes just really put him into a much stronger position. Sanders also did a surprisingly good job of mobilizing in some of the urban areas of the state. And I think that’s something worthy of noting.

With that said, there’s also a caution here for Sanders, and there’s a caution here for all the candidates. Sixty-three percent of the voters in New Hampshire said that their top priority was to get a candidate who can beat Trump. Among those voters, there was a stronger support for Pete Buttigieg, and Amy Klobuchar did very well. Among the 35%, roughly, of voters who said they want someone they agree with on the issues, Sanders did tremendously well. What Sanders has to do, going forward, is to deliver a message, and I think that — I’ve interviewed him about this. I think he does understand this. He has to deliver a message that you can vote for the person you agree with and also beat Trump. It’s that electability message. And the strength of the electability message is something that was illustrated by Amy Klobuchar’s win — or, strong showing. And Amy Klobuchar did very, very well in New Hampshire because she framed the entire close of her campaign around an electability argument. It brought her up so rapidly that at some points last night there was speculation that she might even pull ahead of Pete Buttigieg.

And so, I think the takeaway from New Hampshire is, A, Sanders won. That’s a big deal. It will get national attention and worthy of such. But, B, going forward, all of these candidates clearly are going to have to make a very strong argument around electability, which is rooted not just in slogans and, you know, happy talk, but in really detailed arguments about what the polls show and what is possible.

AMY GOODMAN: Can you talk about, you know, when people say, “Oh, yeah, it was easy for Bernie Sanders, because he is from next door, he’s from Vermont”? Of course, Elizabeth Warren is also from next door to New Hampshire, right? She’s from Massachusetts. And her support really plummeted, along with Biden. And we’ll talk about that.

JOHN NICHOLS: Yeah, that’s true. You know, look, the neighboring state thing is of relevance. It shouldn’t be denied. It does count for something. And in the counties and towns along the Vermont border, Bernie Sanders did very well. So we don’t have to underestimate that. But as you point out, Elizabeth Warren, who actually comes from the state that has, in many ways, a larger influence in New Hampshire, didn’t do that well. Remember, southern New Hampshire is — a lot of it’s in the Boston media market and is very much touched by Massachusetts media, Massachusetts politics. And so, Warren was seen to have a tremendous advantage. She also had a great level of organization and a great level of energy on the ground. She put a lot of time and money into the state. But it did not work. And for the Warren campaign, that becomes a real factor.

I think a couple things need to be noted here. First off, she, I think more than any other candidate, was hurt by the fact that she was in Washington focusing on impeachment. Now, Sanders was there, as well. So was Klobuchar. But for Warren, that focus on impeachment took away from her time to really deliver that personal message, that she’s very, very good at doing, at town halls and things like that. Sanders, on the other hand, did something really smart. And that was, he relied heavily on surrogates who came into the state. If Bernie Sanders couldn’t be present, someone prominent and well known and, frankly, who could draw a crowd was working the towns and working the cities on his behalf. And so, I do think that’s a factor.

And going forward, Warren says she wants to fight on, and I think she should. But going forward, the critical test now is, if she can be physically present in these states — and that’s particularly South Carolina and Nevada — can she begin to make those connections that bring her numbers up? She’s really in a tough testing point here. But, you know, there are still possibilities for her.

JOHN NICHOLS: Well, I mean, with all due respect, he gave up on New Hampshire in the debate on Friday night. I have never, ever seen a candidate say, “You know, I took a hit in Iowa, and I’m probably going to take a hit here.” He essentially telegraphed in that Friday night debate, going into that incredibly critical final weekend, that he didn’t expect to win. In fact, he didn’t even expect to do very well. And so, long before he flew out of state on Primary Day, which was, by the way, much noted in New Hampshire media, he had already telegraphed to voters that he didn’t think he was going to do very well. Well, New Hampshire voters like to send a signal with their vote. And I believe that some of his comments Friday, and even before, led a lot of people to look much more seriously at Pete Buttigieg and at Amy Klobuchar. I think both of them benefited by Biden’s, you know, frankly, bumbling and politically inept performance.

And I have to say one final thing: The way that Biden handled New Hampshire ought to send up every red flag and put off every alarm bell you can hear about the thought of him running against Donald Trump. I mean, he really did not do a good job in New Hampshire.

AMY GOODMAN: I should say that when we talked about Donald Trump winning the Republican primary, beating Bill Weld —

AMY GOODMAN: — some might have thought, “What about the other person opposing him, Joe Walsh?” He dropped out last week, the Illinois congressmember, saying, “I would rather have a socialist in the White House than a dictator, than a king, than Donald Trump,” indicating he would vote for Bernie Sanders if he were the Democratic candidate.

JOHN NICHOLS: That is correct. And I was with Bill Weld yesterday. He was campaigning very hard. I talked to him. You know, it’s a very interesting thing that Bill Weld put a huge emphasis in his New Hampshire campaigning on his belief in science and his determination to address climate change. And that, I think, resonated with — you know, look, one in 10 — almost one in 10 people who went and took a Republican ballot yesterday didn’t vote for Donald Trump; they voted for Bill Weld. It’s notable that about another 5% cast write-in votes or voted for other lesser-known candidates. So Donald Trump lost 15% of the Republican vote in New Hampshire. It’s significant because I think there’s a sense that there’s an absolutely unified Republican enthusiasm for Trump. He has clearly put a lock on that party. But there are actually still, I think, a number of grassroots Republicans who are troubled by his presidency, and particularly troubled on issues. Again, I’ll circle back. Weld emphasized climate very, very much, and I think that resonated with a lot of kind of old-school New England Republicans.

AMY GOODMAN: One of the exit polls showed the concerns of people in New Hampshire: number one, healthcare; number two, climate change; then inequality and then foreign policy. John Nichols, I want to thank you for being with us, The Nation’s national affairs correspondent, host of the podcast Next Left.

When we come back, we’ll be joined by the legendary African-American feminist scholar Barbara Smith on why she supports Bernie Sanders, as we head from the whitest states in the country, where the first caucuses and primaries are held, to the next ones, Nevada and South Carolina, where people of color make up a much larger percentage of the population. Stay with us. 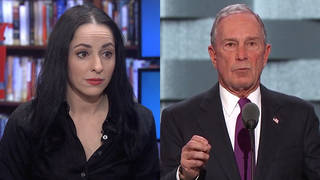