After downplaying the threat of coronavirus for days, President Donald Trump addressed the nation Wednesday from the Oval Office, calling COVID-19 a “foreign virus” and announcing an unprecedented travel ban from most of Europe to the U.S. He also said he will expand sick leave. This comes as Senate Republicans blocked paid sick leave legislation. Robert Pollin, distinguished university professor of economics and co-director of the Political Economy Research Institute at the University of Massachusetts Amherst, says the lack of universal healthcare in the U.S. is exacerbating the coronavirus crisis due to “the absurdity that people cannot feel confident that they are going to get medical treatment” when they need it most. In 2018, Pollin co-authored a paper titled “Economic Analysis of Medicare for All.” His forthcoming book, co-authored with Noam Chomsky, is “The Climate Crisis and the Global Green New Deal: The Political Economy of Saving the Planet.”

StoryJul 01, 2020Ed Yong on the “Disgraceful” U.S. Pandemic Response & How Medicare for All Could Have Saved Lives

NERMEEN SHAIKH: After downplaying the threat of coronavirus for days, President Donald Trump struck a different tone Wednesday night in an Oval Office address. As the number of confirmed cases in the United States topped 1,300 and the death toll reached 38, Trump referred to the COVID-19 pathogen as a “foreign virus” that, quote, “started in China,” and ordered a travel ban that’s unprecedented in U.S. history. Trump’s address inspired panic in financial markets after he said he was imposing restrictions on a, quote, “tremendous amount of trade and cargo” from Europe. Dow futures dropped 1,100 points immediately after the comments, building on historic losses in recent days that ended an 11-year bull market.

AMY GOODMAN: Despite the fact that his Oval Office address was scripted, the Trump administration quickly had to issue a number of corrections. Among them, Trump tweeted the restriction, quote, “stops people not goods.” Trump also said during his speech U.S. insurance companies have agreed to waive all copayments for coronavirus treatments. Then a spokesperson for America’s Health Insurance Plans quickly issued a statement saying the waived copays would only apply to coronavirus tests, not treatment. And Trump also later clarified U.S. citizens in Europe would be allowed to return home, though they will have to undergo screenings. Trump also proposed eliminating payroll tax through the end of the year, with a timeline that would extend the tax cut through his reelection campaign.

PRESIDENT DONALD TRUMP: I’m calling on Congress to provide Americans with immediate payroll tax relief. Hopefully, they will consider this very strongly. We are at a critical time in the fight against the virus. … I will never hesitate to take any necessary steps to protect the lives, health and safety of the American people. I will always put the well-being of America first.

AMY GOODMAN: For more, we’re joined by Robert Pollin, distinguished university professor of economics, co-director of the Political Economy Research Institute at the University of Massachusetts Amherst. The campus just announced it’s closing due to coronavirus. Pollin’s forthcoming book, he co-authored with Noam Chomsky, is titled The Climate Crisis and the Global Green New Deal: The Political Economy of Saving the Planet. In 2018, he co-authored a paper titled “Economic Analysis of Medicare for All.”

Robert Pollin, welcome to Democracy Now! It’s great to have you with us. And we thank the team that is in the studio now, with your university closing. If you can talk about what Medicare for All would mean in the time of the coronavirus, and what President Trump is proposing around this payroll tax cut?

ROBERT POLLIN: Well, the proposal that Trump has come up with is, you know, absurdly inadequate. The House Republicans are blocking the measure, as you reported at the top of the show — are blocking a measure to extend paid sick leave for everybody.

Now, here’s the situation with respect to the coronavirus and the economy. Unlike most recessions, as we move into a recession, in this recession the impact is being felt immediately and is being felt primarily, first of all —

So, the first immediate step is to get money in these people’s pockets, because they’re facing layoffs and furloughs. President Bush, in 2008, sent out checks for everybody, $600 per person, $300 for children. Something equivalent to that, at a higher level, maybe $2,000, is what we need right now. A payroll tax is going to dribble out slowly. It will also benefit people at higher income levels disproportionate to people at lower income levels, so it’s not going to help the people that need it most.

And what the people need most is reassurance that they’re not going to lose their livelihoods, and that if they need medical treatment, they’re going to get medical treatment. So, Trump has not proposed that. Under a Medicare for All economy, of course, that would be a matter of course.

AMY GOODMAN: I want to turn to the exit polls, in every state that voted in the Democratic primary in Super Tuesday 2, showing strong support for Medicare for All, including in conservative Mississippi, where it has the backing of nearly two-thirds of Democratic voters. Speaking on MSNBC Monday, Joe Biden indicated, if elected president, he would veto Medicare for All legislation should Congress send it to his desk. This is what he said.

JOE BIDEN: I would veto anything that delays providing the security and the certainty of healthcare being available now.

AMY GOODMAN: That was Joe Biden. Robert Pollin, your response?

ROBERT POLLIN: Look, Biden has been obfuscating the truth about Medicare for All throughout the campaign. He’s not the only one, but he’s the only one left running. The simple fact is, Medicare for All is capable of delivering high-quality good healthcare to every single person, every resident in the country, at lower cost. Financing this is simple. Financing this is simple because it is going to save money. We know it’s going to save money because every other advanced economy is delivering healthcare for all, as Bernie Sanders said in his speech, at roughly half of what we now pay.

So, when Biden says we don’t know — we can’t possibly afford this, that it is going to bankrupt the country, that flies against all the evidence we have from all the other advanced economies and all the research that has been conducted by many people, myself included, but many other studies. There was a study of all the studies that came out from the University of California about two months ago, which said — not just mine — but showed roughly 20 studies, of which 18 of them all showed that under Medicare for All, we save money. So, Biden, first of all, has at least got to acknowledge that truth, and then recognize — if he says, “I’m going to veto this,” then what we can say is, “Therefore, you’re going to veto a plan in which everybody is able to get good, quality care at lower cost. And how do you defend that position?”

NERMEEN SHAIKH: Well, Professor Pollin, of course, that begs the question, if it is the case that Medicare for All — you wrote an economic analysis of Medicare for All — is going to be cheaper than the present system, then why is there opposition to it that’s sustained the present situation for as long as it has, you know, and, as you point out, which is very different from other advanced economies?

ROBERT POLLIN: Well, the real answer is pretty simple. There’s two big, big, big ways that we save money in Medicare for All relative to our existing system. One is that we eliminate the private health insurance industry. And, two, we dramatically lower pharmaceutical costs, the price of prescription drugs. That means gigantic profits are going to be taken away from health insurance and the pharmaceutical industry. I mean gigantic profits. So, if we add it all up, we’re approaching a trillion dollars here. And they are going to fight with everything they have to keep those profits, and they have virtually the entire political class in their pockets, including Joe Biden.

AMY GOODMAN: We’re going to talk about paid leave, such a critical issue in a time of COVID-19, so that people don’t go to work sick, but then don’t lose money if they do. We’re going to go to break. We want you to stay with us, Robert Pollin, and we’ll be joined by another economist and a lawyer who is fighting for this in this state, New York, one of the epicenters of the coronavirus, and all over the country. Stay with us. 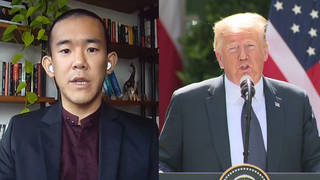 Ed Yong on the “Disgraceful” U.S. Pandemic Response & How Medicare for All Could Have Saved Lives