Can Joe Biden Stop Bernie Sanders? Establishment Lines Up Behind Former VP, But Is It Too Late?

Millions of voters in 14 states are heading to the polls today for Super Tuesday, as Democratic centrists coalesce around former Vice President Joe Biden as their best shot to defeat front-runner Bernie Sanders. Just ahead of the most decisive day of the 2020 Democratic presidential primary, Minnesota Senator Amy Klobuchar suspended her campaign and endorsed Biden on Monday. Her endorsement came one day after former South Bend Mayor Pete Buttigieg dropped out of the race. Both joined Biden on the campaign trail in Texas on Sunday. This comes as former New York City mayor and billionaire Michael Bloomberg — who has also presented himself as an alternative to Sanders — will be on the ballot for the first time, after passing half a billion dollars in campaign ad spending last week. Super Tuesday could also prove decisive for Elizabeth Warren, whose home state of Massachusetts heads to the polls today. We speak with Ryan Grim, D.C. bureau chief for The Intercept. His recent book is titled “We’ve Got People: From Jesse Jackson to Alexandria Ocasio-Cortez, the End of Big Money and the Rise of a Movement.”

AMY GOODMAN: This is Democracy Now! I’m Amy Goodman. Millions of voters in 14 states and American Samoa head to the polls today for Super Tuesday. Just ahead of this most decisive day of the 2020 Democratic presidential primary, Minnesota Senator Amy Klobuchar suspended her campaign and endorsed Biden on Monday. South Bend Mayor Pete Buttigieg dropped out of the race Sunday. Both joined Biden on the campaign trail in Texas.

SEN. AMY KLOBUCHAR: It is time for a president that will bring decency and dignity back to the White House.

AMY GOODMAN: Meanwhile, on Monday, front-runner Bernie Sanders responded to a reporter who asked if he believed Buttigieg dropped out of the race as part of an effort to stop his path to the nomination.

SEN. BERNIE SANDERS: Look, it is no secret — I mean, The Washington Post has 16 articles a day on this — that there is a massive effort trying to stop Bernie Sanders. That’s not a secret to anybody in this room.

AMY GOODMAN: This comes as former New York City mayor, billionaire Michael Bloomberg, who has also presented himself as an alternative to Sanders, is on the ballot for the first time today. Super Tuesday could also prove decisive for Elizabeth Warren, whose home state of Massachusetts heads to the polls today.

For more, we’re joined in Washington, D.C., by Ryan Grim, D.C. bureau chief of The Intercept, his recent book titled We’ve Got People: From Jesse Jackson to Alexandria Ocasio-Cortez, the End of Big Money and the Rise of a Movement.

I guess the question is, Ryan Grim: Do you really think this is going to be the end of big money? But I also look forward to having you on our five-hour joint Intercept-Democracy Now! broadcast tonight, beginning at 7 p.m. Eastern time, right 'til midnight, to talk about the results of Super Tuesday. But now we're moving into it, although millions have already voted. Can you talk about the significance of what has taken place over the last 48, 72 hours, with the Democratic establishment coalescing around Joe Biden?

RYAN GRIM: Right. And, you know, putting ”The End of Big Money” in the subtitle was kind of aspirational, because, obviously, big money is still here. But this is the first campaign cycle where we’ve seen big money create not just advantages, but disadvantages. All of the candidates that you talked about were both helped by their ability to raise from millionaires and billionaires, but also hampered. It hurt them among Democratic primary voters. And that has never been the case before.

I think all of this consolidation around Joe Biden, this rapid move in his direction, with the supposed shadow work by Obama behind the scenes, is setting up the confrontation perhaps a little bit earlier than the Bernie Sanders campaign thought it was coming, but later than the establishment really needed it to happen. Bernie Sanders has gotten a lucky calendar in a lot of ways, not just the way it went from Iowa, which is stronghold, to New Hampshire, which is next to Vermont, and then over to Nevada, which is a kind of a perfect demographic for his coalition. He also got lucky in the sense that South Carolina came on a Saturday, and now here we are, just days later, on what Joe Biden called “Super Thursday.” And so, the party didn’t have the time that it needed to kind of halt his momentum. There are already millions of votes that have been cast around the country, but particularly in Texas and California. And at the same time, you have Michael Bloomberg pulling votes away from Joe Biden.

You know, we’ll know a lot more later tonight on the program that we’re going to be doing, but I think that pundits might be overestimating by a significant degree just how influenced voters are by what Pete Buttigieg, Amy Klobuchar and Beto O’Rourke tell them. Their base of voters are highly educated, college degrees and above. These are people who had a year to study Joe Biden and decided not to support the candidate that the party was putting in front of them, and instead search for somebody else — Buttigieg, Klobuchar, Biden, O’Rourke, what have you. And so, having those candidates tell them, “Well, no, actually, you should support Biden,” that’s not necessarily going to move them in that direction. And so, if all of this consolidation around Biden happens and Sanders still comes our ahead, that’s a devastating blow to the establishment, which doesn’t quite realize how much it helps Bernie Sanders every time they do something like this and make it appear like they’re trying to stop him. And it appears that way because they are.

AMY GOODMAN: Can you talk about the significance — I mean, you joked for a minute about Biden calling it “Super Thursday.” He did. He quickly corrected himself and called it Super Tuesday. And just last week in South Carolina, he got up, not joking, and said, “I am Joe Biden. I’m running for the U.S. Senate.” Can you talk about the significance of this decision to coalesce around him, and also the NBC reporting about the, quote, “hidden hand” of Barack Obama in all of this?

RYAN GRIM: Right. So, the decision was kind of made early on to say, “OK, Joe Biden is the Democratic Party’s guy, if he can win.”

RYAN GRIM: You know — sure. It’s his to lose. And if he shows us strength, then the party establishment is going to get behind him. It was his to lose, and he lost it. But nobody else on the establishment side could win it. And so, by default, they’re back to him. And they are forgotten why, over the course of the last year, everybody decided that he could not beat Trump in the general election.

AMY GOODMAN: Well, to be continued. Again, Democracy Now! and The Intercept are teaming up tonight for a five-hour broadcast around the results and analysis of Super Tuesday. That’s 7:00 Eastern time to midnight right here at democracynow.org and on many television and radio stations around the country.

By the way, Democracy Now! is hiring for a number of positions here in our New York City studio, from our newsroom to our outreach and development. Go to democracynow.org for more information. 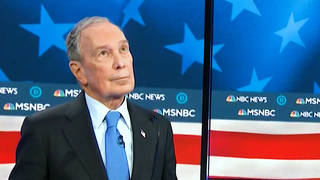