“Housing Is Health”: Calls Grow for California to Give Vacant Homes to Unhoused People Amid Pandemic

We look at the crisis of homelessness during the coronavirus pandemic in California, where the number of cases has passed 6,000 with 132 deaths. The entire state has been ordered to shelter in place, leaving the state’s massive unhoused population extremely vulnerable. As the state braces for a surge in cases, tens of thousands of people are living on the streets. A recent study estimates that nearly 2,600 unhoused people will need to be hospitalized for the virus in Los Angeles alone — and nearly 1,000 will need intensive care. We speak with Martha Escudero, a member of a group of unhoused mothers, elders and families who have moved into vacant houses, and Carroll Fife, director of the Oakland office for Alliance of Californians for Community Empowerment (ACCE).

AMY GOODMAN: We turn now to California, where the number of cases has passed 6,000 with 132 COVID-19 deaths. The entire state has been ordered to shelter in place as California braces for a surge in cases, but more than 100,000 people are still living on the streets. A recent study estimates nearly 2,600 unhoused people will need to be hospitalized for the virus in L.A. alone, and nearly a thousand will need intensive care. Governor Newsom has pledged thousands of hotel rooms for homeless people. Los Angeles Mayor Eric Garcetti said that he will open recreational centers to shelter the unhoused. And San Francisco is looking to convert churches and schools into shelters. But calls are growing for the state to use vacant homes to shelter the unhoused and employ other more drastic measures to protect people without homes.

For more, we’re going to Oakland to Carroll Fife, the director of the Oakland office for Alliance of Californians for Community Empowerment, key organizer in the Moms 4 Housing movement earlier this year, when unhoused mothers occupied a vacant Oakland house until they were eventually able to win its sale. In a minute, we will also go to a mom in Los Angeles, who has joined a new movement to occupy empty houses.

Carroll Fife, we begin with you in California. Lay out the issue in Oakland right now. The moms movement, that we covered so extensively, has taken on new, urgent meaning right now, when people are trying to shelter at home, if they had one.

CARROLL FIFE: Correct. And thank you for the coverage, the intensive coverage that you all did. And just like the speaker from New York said, the situation in Oakland, California, is exactly the same. There are still vacant properties that are going unlived in, and people still are living on the streets. Mothers and children are still living on the streets. Moms’ House is still vacant. And we have a pandemic, that is supposed to — well, the governor has said that we have to shelter in place. But if you don’t have a place to shelter in, then you can’t do that, and it really puts everyone in jeopardy. So, if they’re as serious as they say they are, they will immediately open up these hotels, open up spaces. There are still luxury units all over the city of Oakland that have like huge vacancy rates. And we need to get people in them for the sake of everyone, for the sake of every single resident in our city.

AMY GOODMAN: I want to bring in — I want to go to Los Angeles. We’re joined by Martha Escudero, who is a mother of two and Reclaiming Our Homes member. She was the first to reclaim an empty house owned by California earlier this month. If you can start off by talking about the group of unhoused mothers, elders and families that are occupying 13 vacant homes to stay safe during the pandemic, Martha?

MARTHA ESCUDERO: Hello, Amy Goodman. Thank you so much for this coverage. Yes, we’re part of a group called Reclaiming Our Homes. I, myself, as a mother of two, Victoria and Meztli — they’re 10 and 8 years old. We became aware of these houses being empty. There’s 40 in El Sereno, where I’m at. And counting Alhambra and South Pasadena, there’s about 200 that are owned by the California state and are still sitting vacant while we’re in a crisis. The whole state of California’s rent has gone so high in these last few years that it’s become Skid Row. And it’s really immoral for us to be — for the state to be hoarding these empty houses while there are so many people on the streets, especially during this pandemic. So we feel that it’s really important for the most vulnerable people to be able to be housed and be able to keep up their hygiene, so that we don’t spread the virus. So we’re asking the governor to have all these vacant homes open immediately to be housed by the most vulnerable — the elderly, the ones that are chronically ill. And we believe that housing is a human right and should be affordable and equitable for everybody. And if the government’s not working fast enough, it comes to the power of the people to be able to love and protect each other and finding solutions for our government that’s not doing its job.

AMY GOODMAN: Can you talk, Martha, about the city’s response, Mayor Garcetti’s response to your whole movement? You’re speaking to us from one of the houses that your group is occupying, from where you’re living. He announced Los Angeles would use rec centers to shelter the unhoused, and Governor Newsom has announced the state will use hotels. What are you saying?

MARTHA ESCUDERO: Regarding the Caltrans homes, I know the mayor has no jurisdiction. However, there’s also county-owned, city-owned, and the school district owns a lot of vacant homes that are livable, that are ready. These homes, for example, a lot of the people are saying they were not properly taken care of. They had minor issues, some of them, and we were able to fix them — we, the people, the community, Reclaiming Our Homes. The government could do the same. They’ve been hoarding these for like 30 years, 20 years. They need to act faster, especially during this pandemic. This is immoral and unjust to have — they want us dead. You know, they’re not doing enough. So we need to take that power within our own hands. We’re forced to do that.

AMY GOODMAN: Carroll Fife, in Oakland, we just did a segment on health justice and what that looks like in a pandemic. Can you talk about the issue of racial justice in this pandemic, in unhoused people finding safe spaces to be in, not to infect themselves, their families and the overall community?

CARROLL FIFE: Well, housing is health. It’s foundational to health. And without it, you can’t actually have the things that you need in order to thrive, in order to live. And it’s a death sentence in Oakland for Oakland’s unsheltered population and for our seniors and for the people who don’t have access to the resources that our mutual aid organizations have been providing. Our hospitals are overstaffed, are just running over. They haven’t seen the whole — the curve actually hit right now. They haven’t seen an onslaught of the patients that they will probably get over the next few days or next few weeks. But they are not prepared. None of us were prepared for this. And just like our family down in L.A. said, if the government is not doing what they need to do, then we will be forced to do it ourselves.

And so, it’s a racial — it runs along racial lines like every other issue in our country, that it impacts black folks and brown folks the most. Right now our population of homeless folks in Oakland is 70%. So that means that if you’re unsheltered and it’s predominantly black, then it’s a death sentence for you. There are people on the streets that are frightened that their lives are going to end, because no one cares about them.

CARROLL FIFE: You just — you don’t. It’s a farce. It’s a farce. And it is designed to make it appear that our government is doing something. But that’s still because of community pressure of groups like ACCE Action and Protect Oakland Renters, the group that worked together with our city councilmember, Nikki Fortunato Bas, to pass this moratorium, which is stronger than any other moratorium in our region, in the state, that it was because of community pressure that these things happened. And that is unfortunate. In the situations we’re living in right now, it really is life or death for so many people and marginalized people. We have to do better. 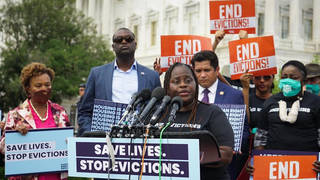