“Atrocious”: Police Killed Elijah McClain in 2019. Why Did It Take Colorado So Long to Launch Probe?

Colorado Governor Jared Polis has ordered a new investigation into the 2019 police killing of 23-year-old Elijah McClain in Aurora, which is facing renewed scrutiny and outrage amid the nationwide uprising against police brutality. McClain was walking home from a store last August when someone called 911 to report a “suspicious person.” Three Aurora police officers who answered the call tackled McClain to the ground and placed him in a chokehold as he pleaded for his life, and medical responders who arrived then injected McClain with the powerful sedative ketamine. He suffered a cardiac arrest on the way to the hospital and died several days later. “It’s really atrocious that it’s taken almost a year for this case to gain the kind of attention that it should have gained immediately,” says Mari Newman, attorney for the McClain family.

On the night of August 24th, 2019, Elijah was walking home from a store where he bought iced tea, when someone called 911 on him to report a, quote, “suspicious person,” though they said he was unarmed. McClain was wearing a ski mask, something his family says he often did because he had anemia and got cold easily.

Police body camera footage — a warning: This footage we’re showing contains disturbing scenes — shows three Aurora police officers answering the call, attempting to handcuff Elijah McClain. He was unarmed, had committed no crime, was simply walking home. After one officer grabbed him by the arms, Elijah said, quote, “I’m an introvert. Please respect the boundaries that I am speaking. Leave me alone.” Despite this, the officers then used a chokehold, that’s since been banned, to bring McClain to the ground. In body camera footage of the encounter, McClain can be heard saying the same words George Floyd and Eric Garner uttered in their final moments: “I can’t breathe.” Again, a warning to our audience: The following video contains disturbing footage of police violence.

POLICE OFFICER: Stop fighting us on the ground.

ELIJAH McCLAIN: My name’s Elijah McClain! Ask me what I was doing? I was just going home! I’m an introvert, and I’m different. I just don’t like going home. I’m just different. I’m just different! That’s all! That’s all I was doing! I’m so sorry! I have no gun. I don’t do that stuff. I don’t do any fighting. Why were you taking me? I don’t [inaudible] guns. I don’t even kill flies. I don’t eat meat. I am not — I’m a vegetarian. I don’t judge people for anything.

AMY GOODMAN: Medical responders soon arrived on the scene and injected Elijah McClain with ketamine, a kind of anesthetic, for someone the size of 300 pounds. He is 140 pounds. He suffered a cardiac arrest on the way to hospital, died several days later. Footage from the night of Elijah McClain’s killing is incomplete because the officers’ body cameras did not capture the entire encounter. The police say the cameras fell off during the arrest, but in one clip from that night, a police officer is seen telling another officer on the scene to move his body camera. Listen carefully, as the audio is muffled.

AMY GOODMAN: “Move your camera, dude,” one police officer said to another. In another clip of Elijah’s arrest, one of the officers hands his body camera to another officer on the scene, saying he shut it off.

POLICE OFFICER 2: Whose is this?

POLICE OFFICER 1: Mine. It was recording. I just shut it off, because it was split in half, so…

AMY GOODMAN: One of the officers claimed Elijah McClain reached for the officer’s gun during the arrest. But in this clip from the body camera, police officer Jason Rosenblatt tells another officer on the scene he did not feel Elijah grab his gun.

JASON ROSENBLATT: Roede tells me he tried to grab my gun. So, pull him down.

JASON ROSENBLATT: Yeah, so he pulls his arm free. It comes out. And I don’t remember feeling it, because I was focused on him. But he’s like, “He tried to grab your gun.” So I’m like, “OK.” So, he comes down and…

AMY GOODMAN: The three officers involved in the killing — Nathan Woodyard, Jason Rosenblatt and Randy Roedema — were never criminally charged. They were temporarily placed on administrative leave but have all been reinstated. Six months after his killing, an Aurora Police Department excessive force review board found the officers’ actions were, quote, “within policy and consistent with training.”

Elijah McClain was a massage therapist, a gentle soul who loved to play the violin. He would often go to animal shelters to play music for the dogs and the cats there.

Well, for more on Elijah McClain’s killing, we go to Denver, Colorado, where we’re joined by his family’s attorney, Mari Newman. Her op-ed in The Denver Post is headlined, “Colorado’s police reform law will help rein in worst of law enforcement behavior.”

Welcome to Democracy Now! It’s good to have you with us, Mari. If you can take us through, once again, what you understand and how it is possible that it’s only almost a year later that the attorney general is now reinvestigating this case and the officers are at work? What happened to him that night?

MARI NEWMAN: Thanks, Amy. You’ve given a great summary of what happened.

You know, it’s really atrocious that it’s taken almost a year for this case to gain the kind of attention that it should have gained immediately. Back in November of last year, we were standing on the steps of the municipal building in Aurora, Colorado, demanding an independent investigation. And at that time, all we heard was crickets. The new mayor was elected of Aurora, Mayor Mike Coffman. Even before he came into office, he said his first order of business was going to be to address this case. He did nothing. He never reached out to the family.

We heard nothing about that until very recently, after an online petition, once it reached somewhere over a million signatures. I understand that it’s something over 3 million now. We heard, through the media, that Aurora had hired a so-called independent investigator to look into the case. It turned out the independent investigator wasn’t independent at all, was in fact a former police officer turned lawyer whose practice is dedicated to defending officers accused of excessive force. So, that’s who Aurora brought in for their independent investigation — obviously, yet another effort to deny all accountability.

So, finally, now that there has been this massive outcry, millions and millions of signatures, international media attention, the governor of Colorado has actually stepped in and called for a truly independent investigation from our state attorney general. So, hopefully that will lead to some more robust outcome.

AMY GOODMAN: So, Elijah was walking home from the grocery store with an iced tea, and the police stopped him. And then, explain exactly what they did to him.

MARI NEWMAN: You know, at the outset, there was no legal justification for them to stop Elijah. He wasn’t suspected of committing any crime. And I know you played part of the 911 clip. The caller says, “No, I don’t believe he’s committed any crime. There’s no weapon involved. I’m not in danger. Nobody else is in danger.” So there was no reasonable suspicion to believe he had committed any crime, and thus no reason to even stop him.

And yet these three officers not just stopped him, but grabbed him, threw him up against a wall, tackled him onto the ground, inflicted multiple kinds of force upon him, two carotid chokeholds. His entire body is covered with abrasions. And as you saw, he’s vomiting from the pain.

AMY GOODMAN: They were mocking him as he threw up?

MARI NEWMAN: It’s astounding. you hear one officer saying, “Oh, don’t get that on me,” and then another one who threatens, “I’m going to bring in a dog to bite you if you don’t quit messing around.” I mean, if that is the quality of law enforcement in Aurora, then people should be petrified.

AMY GOODMAN: And then paramedics came in and injected him with a massive dose of ketamine? Explain what it is, why they would inject him.

MARI NEWMAN: You know, there’s no reason for them to have injected him at all. He was handcuffed on the ground. His hands were cuffed behind his back. He was down on the ground. He was being pressed down by officers, each of whom very significantly outweighed him. He was being pressed down into his own vomit. He was struggling to breathe, but he was not fighting. So, there was no reason to inject him with anything at all, much less a dosage of ketamine that would have been appropriate, if for anybody, for somebody well over twice his size.

MARI NEWMAN: The three police, just very recently, within the last couple of weeks after this case gained international attention, have now been placed on desk duty, not to protect the public, but protect them. So, this just is one more illustration of Aurora’s motivations here. The city has not been concerned one bit about the safety of the public. In fact, the only officer who received even the tiniest hand slap was the one who threatened to sic a dog on a dying man who was being pressed down into his own vomit. The rest were back out on the street until just a couple of weeks ago.

AMY GOODMAN: What does his mom want to see? What does Elijah’s mom?

MARI NEWMAN: You know, the hope — Elijah’s family hopes to see all of the officers who were involved criminally prosecuted, certainly the three who were directly involved, but also the seven officers, including a sergeant, who stood idly by and failed to intervene as their son was being killed, a sergeant who even says he was becoming increasingly concerned about Elijah’s physical well-being but did nothing about it. And then, of course, the two medics who gave him this massive dose of ketamine, they should also be criminally charged.

AMY GOODMAN: Mari Newman, I want to thank you for being with us, attorney for Elijah McClain’s family in Aurora, Colorado.

We’re breaking for 30 seconds. Then we go to Louisiana, where two environmental activists are charged with, quote, “terrorizing,” and we’ll find out why. Stay with us.

AMY GOODMAN: “Killing Me Softly,” performed by violinists Ashanti Floyd and Lee England Jr. during the Justice for Elijah McClain protest over the weekend, a violin vigil because Elijah played the violin. 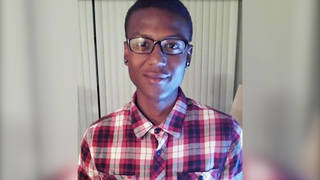