As protests against police brutality continue nationwide, immigrant rights advocates are sounding the alarm over the presence of Immigration and Customs Enforcement agents at some of the demonstrations. A viral video showed a group of ICE agents working with the New York City Police Department to detain a protester at a George Floyd rally in New York City last week, and advocates say agents held the man on the ground as they pointed three guns at him and handcuffed and searched him. He was reportedly released after agents found a military veteran’s ID on him, and is a U.S. citizen of Puerto Rican descent. We speak with Mizue Aizeki, deputy director at the Immigrant Defense Project.

StoryJun 09, 2020DACA Recipients “Want to Be in the Streets Building Solidarity” But ICE Arrests 3 at Phoenix Protest

AMY GOODMAN: We begin with protests around the country. The protests against police brutality continue nationwide. Immigrant rights advocates are sounding the alarm over the presence of ICE — that’s Immigration and Customs Enforcement — agents at some of the demonstrations. Last week, a viral video showed a group of ICE agents working with the New York City Police Department to detain a protester at a George Floyd rally in New York City. The Immigrant Defense Project said agents held the man on the ground as they pointed three guns at him. The man, who hasn’t been identified, was handcuffed and searched. He was reportedly released after agents found a military veteran’s ID on him. Immigration rights advocates say the man is a U.S. citizen of Puerto Rican descent.

Welcome to Democracy Now! It’s great to have you with us. You’re with the Immigrant Defense Project, Mizue. Can you describe what exactly happened? How were ICE agents in this demonstration? And what happened to this man?

That’s a really good question — what happened, and why was ICE there? You know, from what the man told us, he was walking down the street. He had just joined a protest of people marching down the street in the Upper West Side. All of a sudden, you know, a black SUV pulled up. Five men jumped out. And they were all plainclothes, some of them — I think three of them — with their guns drawn, one wearing a vest that said ”ICE HSI.” They threw him on the ground, basically, you know, very forcefully — he hit his head, has a big bruise there — and then started searching him illegally, as you mentioned. They took his phone out of his back pocket, tried to unlock it, but they weren’t able to. They went through his wallet, and that’s where they found his ID, as you mentioned. After 10 minutes of arresting him, detaining him, the agents were told by their supervisor to let him go, because they had no grounds to hold him.

And, you know, it’s like in so many of these incidents, as we know, like, the agents walk away. The man was left there. Luckily, his health is fine. But, you know, while he doesn’t feel comfortable sharing the story for himself personally, he’s really asked us to share it widely, in the hopes that the abuse will stop and that it won’t result in more harm for others.

And, you know, while it’s not often captured on video, similarly to policing violence, like, this is how ICE operates all the time. And one of the big concerns we have with ICE partnering with the NYPD right now is, you know, they’ve been very opportunistic in terms of policing. Over the past 10 years, we’ve seen ICE basically attach themselves or embed themselves to local policing forces all over the country. You know, now almost every fingerprint taken at a police precinct serves as like an automatic alert system to ICE and triggers a request by ICE — could trigger a request by ICE to ask cops and jails to hold someone after they’re released from criminal custody.

And in New York state, we’ve seen in the past three years under Trump a 1,700% increase in ICE arrests at New York state courthouses. And this is why we have a bill — Immigrant Defense Project has a bill right now in front of the New York state Legislature, the Protect Our Courts Act, which would limit ICE’s practice of targeting people in and around courthouses.

JUAN GONZÁLEZ: Mizue, I wanted to ask you — you mentioned the increase in ICE arrests. You’ve also documented, in the first few weeks of this year, about a 400% increase of ICE raids in New York City. Could you talk about that, in particular, just before the pandemic exploded? And also, what about the fact that New York City government supposedly is not cooperating with these kinds of arrests?

MIZUE AIZEKI: Yeah, that’s a really good point to raise. You know, I think, just as we’re seeing kind of a force coming down to suppress — trying to suppress dissent, I think Trump similarly has tried, since his presidency, to use force to try to really create a lot of fear and, like, implement his mass deportation agenda.

You know, you may or may not know that since DHS was founded, the number of policing agents has grown tremendously. We started with almost — very few ICE agents, who go out and conduct raids, right? They grew a lot under Bush and Obama. And then, as you may remember, Trump, when he — in January, his first month of presidency, January 2017, issued an executive order calling to almost triple — right? — I think, the ICE force, or 10,000 additional ICE agents.

And so, the other piece of his agenda has been to pressure cities like New York that have policies that protect — or, that limit ICE collusion with police or local police collusion with ICE — so-called sanctuary cities. And so, starting in January of this year, the Trump administration came down very hard on New York City and New York state. And what we had seen was ICE presence — it almost was like a constant presence on the streets of New York City, in particular.

We had, as you mentioned — you know, Immigrant Defense Project receives reports of ICE raids. There were 400% more in the first 11 weeks, up until — you know, compared to the last 11 weeks of the previous year — up until the time when the city shut down because of COVID, right? So, we had a report of an ICE arrest the morning before — the day before the governor declared New Rochelle a containment zone. You may remember that was one of the first areas that was really hard hit, in Westchester County. We had ICE taking advantage of people being in their homes, you know, and conducted an arrest there. We had ICE also conducting an arrest in Long Island the same day they shut down the schools there during COVID. And, you know, we’re all familiar, as you mentioned, the story before the last news segment, about ICE refusing to release people in detention and continuing to deport people, people with COVID, during this whole time.

Oh, sorry, I just wanted to also add, you know, I think the other thing that we saw happening in January was the threat of the Border Patrol SWAT team, BORTAC, right? The Trump administration said that they would be sending BORTAC into cities like New York that have such policies to protect immigrant rights. And then also we saw other tactical teams from ICE, with assault weapons, standing out in the street in the Bronx and stating that they’re conducting surveillance 24/7 under a program called Operation Palladium.

AMY GOODMAN: I just wanted to ask you about the issue of New York being a sanctuary city. So, why are these ICE agents in New York City tackling this Puerto Rican man?

MIZUE AIZEKI: Well, I think that there’s always been a lot of — the term “sanctuary city” — you know, clearly, I think, New York isn’t a sanctuary city, right? We are seeing a lot of abuse, violence by the state or the police toward Black and Brown communities in New York consistently. And I think also, you know, the ability of the city to limit ICE presence here, you know, there’s only so many options — right? — I think, and the detainer policy is one of them.

But I think the other thing, that since — especially since DHS was founded and since post-9/11, is we’ve seen many forms of collaboration between local police and federal police in the form of joint task forces or, you know, I think, this notion of this being kind of a legitimate police force. And this is something that I think is really important to kind of raise and challenge. You know, just like we’ve heard a lot of great commentary on your show and analysis of people about what the real function of policing is — right? — on a domestic level, it’s really to maintain social control and an unequal status quo, right? And so, ICE is basically kind of the global police force, which also serves to maintain a highly unequal global world order — right? — with the U.S. at the center of that power.

And so, I think one of the things that we keep trying to challenge and fight back on is this notion of ICE policing. You know, I think that there’s a lot of mission creep that has been happening, and also a lot of freedom for ICE to be present in New York conducting these raids. And, you know, ICE often hides behind kind of like the rule of law, like “we are police,” and politicians protect them in that. But part of the work that we’re trying to do is to expand our analysis around this.

And, you know, really, it serves those in power if immigration is separated from imperialism, right? There’s a great quote from a Sri Lankan who’s from London — who lived in London in the '50s, who said, “We are here because you are there.” And, Juan, I think, as you point out in your book Harvest of Empire — right? — the long history of U.S. military and economic intervention in Latin America has shaped the migration flows to the United States. And so, why do I bring this up when you're asking me about what right ICE has to be here is, I think part of our work still is to challenge kind of the legitimacy of ICE and kind of expose their function in the global world order.

AMY GOODMAN: Mizue, we want to thank you for being with us. Mizue Aizeki is deputy director of the Immigrant Defense Project, speaking to us from New York. 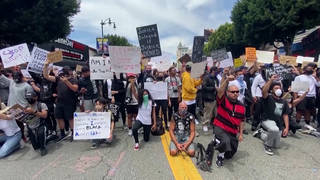