Immigration agents are facing accusations of targeting protesters who are recipients of the Deferred Action for Childhood Arrivals program, or DACA. Police in Phoenix, Arizona, arrested community activist Máxima Guerrero as she was leaving a protest on May 30 with a group of legal observers. She was one of three DACA recipients arrested over that weekend in Phoenix. We get an update from Sandra Castro Solis with the Phoenix-based grassroots immigrant justice group Puente Human Rights Movement, who says that despite the risks, “we’re in a moment where people want to be out in the streets building that solidarity.”

AMY GOODMAN: We turn now to Phoenix. Immigration agents are also facing accusations of targeting protesters who are recipients of DACA — that’s Deferred Action for Childhood Arrivals program. Police in Phoenix, Arizona, arrested community activist Máxima Guerrero as she was leaving a protest May 30th with a group of legal observers. She was one of three DACA recipients arrested over that weekend in Phoenix. Guerrero is an organizer with the immigrant rights group Puente Human Rights Movement and already wears an ankle monitor, so ICE is monitoring her constantly. She was released on June 1st with help from lawyers, and addressed supporters.

MÁXIMA GUERRERO: This morning at — I came to ICE around like 2 a.m. At 7 a.m., they started the processing, and I was going to be sent to Eloy. And then, through, of course, attorneys and Ray and the efforts there, I was able to be out for now.

AMY GOODMAN: So, that’s Máxima Guerrero, who is a DACA recipient.

We welcome you to Democracy Now!, Sandra. Can you explain Máxima’s case? I mean, the level of risk that all protesters take now in confronting police brutality, with a number of brutal police facing them, is that immigrants also face the possibility of deportation. Talk about Máxima’s case and the other people who you are working with.

Yeah, with the case of Máxima Guerrero and the other individuals, so, Máxima was present on May 30th as a legal observer. She was at the downtown facilities, where there was the ongoing protests, really advocating justice for George Floyd and Dion Johnson, someone who was also murdered on May 25th by Department of Public Safety. So, in our community, there was a lot of protest.

And Máxima is a DACA recipient, was there primarily to ensure there was safety going on with Phoenix Police Department, because, with us, the history has always been that they act out with excessive force when it comes to meeting protesters. So she was there documenting. And towards the end of the night, around 1 a.m., she was actually picked up and arrested getting into her car. So, it’s very important we keep on repeating it over and over: She was there as a legal observer, and she was picked up and arrested.

Once she was arrested, she was given these harsh charges by Phoenix Police Department, including rioting, which is a felony, a felony 1 conviction, which would automatically alert ICE to put an ICE hold on her. So this is how she got trapped in what we call the web of deportation system, a mechanism that was already placed, when we’re talking about how immigration works in Arizona, where then, inside of 4th Avenue Jail, under Sheriff Paul Penzone’s watch, ICE was able not only to place the hold, but also go and pick her up along with the other DACA recipients.

JUAN GONZÁLEZ: Sandra, I’m wondering if you can talk about the whole issue of —

AMY GOODMAN: Juan, I’m going to have to jump in, because we’re actually having trouble hearing you. Ah, the pandemic broadcast of people broadcasting from home. And I didn’t get to hear your question to amplify on it, Juan. But if you can talk about the other protesters, Sandra, and the kind of risk they face, and what people are willing to face, as they take on this issue of police brutality and honor George Floyd, these other cases?

SANDRA CASTRO SOLIS: Right. So, right now we’re in a moment where people want to be out, out in the streets advocating, building that solidarity, especially when we’re talking about the Latinx, the Chicanos, undocumented community. They want to be out in the streets in solidarity. And a lot of folks are coming. They are seeing that these protests are being met with excessive force. However, they are seeing that this call for justice is far too big to not answer. And a lot of folks are going, such as Johan, who is also another DACA recipient who was caught in.

One thing that is very important to note when we’re talking about protesting and we’re talking about anybody going to protest, whether it is a DACA or somebody who does not have any papers whatsoever, is that protests are supposed to be considered sensitive locations. The Trump administration had even acknowledged protests being a sensitive location, just like hospitals, just like funerals, just like weddings, where ICE is not supposed to be allowed to even be around the periphery, but also there is not to be any raids. But we see now what really this umbrella guise is, is that if ICE isn’t out there rounding people up, targeting individuals who they want to pick up, like what we’re seeing with the cases in New York, it is the police departments themselves who are arresting and giving high charges to individuals, who may or may not have DACA recipient — may be eligible to be DACA recipients, and streaming them into this deportation pipeline. So this is what’s happening. It’s all a mechanism that has already existed, and it has existed to continue to criminalize Black and Brown bodies.

AMY GOODMAN: What’s at stake for the immigrants’ rights movement with the call to defund police? How does that include — or does it — ICE?

AMY GOODMAN: And also, Sandra Castro Solis, could you talk about the immigration jails in Arizona, like La Palma, among the U.S. ICE jails with the largest COVID outbreak?

JUAN GONZÁLEZ: I don’t know if she’s already talked about —

SANDRA CASTRO SOLIS: So, that detention center has over 78 positive cases of COVID-19. And ICE continues to release — denies the number of information that they’re putting in as far as how many tests that they’re given. So, this is a facility with 3,000-bed space, 78 already confirmed cases, and no signs of how many people inside detention are being given tests, what that protocol looks like, and also we don’t know what type of tests the staff or anybody who is coming inside and outside of these facilities.

What we’ve seen with the Arizona Free Them All campaign that we’ve been launching is that detention centers, prisons, these are hotbeds. And these are not only areas for vast contamination with people who are inside, but we’re also seeing that the guards, the staff who come in and out these different prison and detention towns are also aiding to the high contamination rate when we’re talking about these prison towns and these prison cities. Yuma, Arizona, is a specific example for this, where it is considered the hotbed for COVID-19 in our state.

JUAN GONZÁLEZ: Sandra, I wanted to ask you — first, my apologies for dropping out there. I was trying to — we were having some microphone difficulties. But I wanted to ask you about the issue of accountability on the part of ICE. With local police departments, increasingly, more and more police departments have body cam videos, body cams on their officers. Some of them, an increasing number, have local police review boards. What kind of accountability exists for monitoring the actions of ICE, given the fact that it is a national law enforcement agency?

SANDRA CASTRO SOLIS: Well, at this moment, I believe, you know, our community believes, there is no accountability. And I think that that’s why Puente and other organizations, you know, we are — these organizations, we are the people on the ground who are actually there holding them accountable. I mean, at this time, ICE can’t even track how many tests they’re administering, or, rather, they don’t want to share how many ICE tests — COVID-19 tests they’re giving. ICE isn’t tracking how long it took — you know, ICE isn’t giving us the information how long it took once these charges for the DACA recipients were dropped, how long — how and why they were still held in 4th Avenue Jail, how and why ICE was able to pick them up, how and why ICE was able to tell these folks, including Máxima, that they were going to take them — that they would end up in La Palma detention center by the end of the day.

AMY GOODMAN: I want to thank you so much, Sandra Castro Solis, for joining us, advocate with the grassroots immigrant justice group Puente Human Rights Movement, speaking to us from Phoenix.

When we come back, as the lockdown is slightly lifted in New York, what does this mean for the largest transportation system, the city’s mass transit system, the subway? Stay with us. 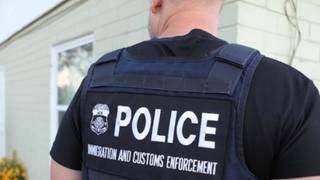