COVID-19 infections are skyrocketing in South Africa, now fifth in the world for coronavirus cases, with an already fragile hospital system. “I really think it’s our inequality reckoning moment,” says Fatima Hassan, a human rights lawyer with the Health Justice Initiative. “All of the fault lines of South Africa’s post-apartheid democracy, and its inequality and its violence, is actually coming to the fore.”

AMY GOODMAN: We turn now to South Africa, where skyrocketing COVID-19 infections have made the country fifth in the world for coronavirus cases, overwhelming an already fragile hospital system and signaling a dangerous turn for the African continent, which has so far avoided the worst of the pandemic. South Africa recorded nearly 382,000 cases as of Wednesday, a number that’s certain to be an underestimate. So far, the death rate in South Africa has remained low, even as case numbers soar, with nearly 5,400 reported fatalities. But South African President Cyril Ramaphosa said the number of deaths could reach 50,000.

The virus poses a particular threat to poor South Africans, who are less able to socially distance and access adequate medical care. Half of South Africans live in poverty. One-third of South Africans are unemployed. At least 3 million people have lost their jobs due to the pandemic.

In response to the rising numbers, the president has banned alcohol sales, mandated mask-wearing and imposed a curfew. This comes after South Africa took aggressive action to curb the virus in March, implementing a shutdown, then rolled back restrictions, facing an economic crisis.

This comes as a University of Oxford vaccine trial has shown promising results. But researchers say the study will face a challenge in South Africa, where scientists are trying to sign 2,000 people up for a vaccine trial while the numbers surge. This is the head of the trial in South Africa speaking to CNN.

SHABIR MADHI: It might well be that we fail, not because a vaccine doesn’t work in protecting people, but simply because the force of exposure is so tremendous. So this is really going to test the mettle of this vaccine.

Welcome to Democracy Now!, Fatima. It’s great to have you with us. Why don’t you start off by talking about the scope of the crisis, the pandemic, in South Africa, and then particularly what’s happening around this Oxford vaccine trial that needs something like 2,000 volunteers, but finding those who are COVID-free is very difficult?

FATIMA HASSAN: So, first, thank you, Amy and Juan, for having me on the show. It’s great to be on.

So, I think the first issue with the trial is that what’s significant is that the president and the government agreed to offer solidarity and participate in the trial, which is being led by Oxford University through South Africa’s Wits University. The difficulty, of course, is, one, trying to secure a sufficient number of volunteers for the trial, with — as you correctly point out, within a climate where the numbers of people living with COVID are increasing, and we also estimate that that is a significant undercount because our testing strategy has been hampered by the lack of available testing kits, so the criteria for testing has changed, and, in effect, it amounts to rationing at the moment.

The second issue with the trial, which actually is — you know, involves, quite significantly, a pharmaceutical company called AstraZeneca. And the issue around AstraZeneca’s relationship with Oxford, the relationship with the South African government, as in the contractual relationship, including Wits University, and clinical participants in other parts of the world, in Brazil, as well, is unclear. We’re calling for transparency in those agreements, because, on the one hand, if we are going to participate in a trial that is trying to ensure equitable access to a vaccine, if it is successful, then, certainly, there has to be a framework where equitable access can actually be achieved. And we certainly don’t want to be in a situation like we were during the HIV/AIDS crisis, where wealthier countries are able to access a vaccine much sooner, or some countries in Africa are able to access life-saving vaccination and treatment, and others are not.

JUAN GONZÁLEZ: I’d like to ask you specifically about this issue. You mentioned trials in Brazil, as well. Is there a situation already developing where the testing of vaccines is occurring in the Third World, but the initial beneficiaries of many vaccines will be in the advanced, developed countries?

FATIMA HASSAN: So, certainly, there’s a concern that there are countries that have volunteered to participate in the trial, including in the Global South, but the terms and the conditions for what access would mean, if the trial is successful, is uncertain and unclear. I think what is, you know, concerning is that people are labeling it the “Oxford trial,” but we know that there’s deep involvement of AstraZeneca, and the terms and conditions between Oxford University and AstraZeneca is not available. And this, you must remember, is only one of a possible 126 vaccine candidates. About 20 to 22 are in the second phase of clinical testing, and there’s very few, a handful of candidates, that still will go to phase three.

So, you know, the participation of the Global South in one or two of these trials is significant, because we need to do that. We need to participate. We need to offer our solidarity. We need to find a solution to this crisis. However, the chances are that like HIV/AIDS, like a lot of life-saving medication and treatment, we’re going to be last in the line, unless we can guarantee and ensure that the vaccine is freely available, is equitably available to all people in all parts of the world.

There is a campaign, which is being led in the U.S., called Free the Vaccine. Our president, Cyril Ramaphosa, as head of the AU, has supported the people’s vaccine. But, you know, what we’re saying is that all of these are really beautiful and lovely words and statements, but they don’t sort of create any enforceable guarantees, because, like with HIV/AIDS, what they realize is that if you rely on the benevolence and the charity of this particular industry, that is investing millions and millions of dollars in the development of a vaccine, then that won’t guarantee access for the Global South.

JUAN GONZÁLEZ: Well, Fatima Hassan, I wanted to ask you — in terms of the situation in South Africa itself with the pandemic, you’ve said that your country has used a First World response for a Third World country. Could you talk about the situation right there in South Africa?

FATIMA HASSAN: So, I think the situation is worsening. I think we’re in a crisis. Our health system, really, in my view, both the public health service and the private health service, is taking significant strain. Frontline workers are getting sick, are getting exposed repeatedly to COVID, are at risk. They don’t have sufficient supplies of PPE due to global hoarding. We don’t have sufficient supplies of testing, again due to the global geopolitical situation and the reliance on pharmaceutical companies that still insist on holding their patents or only giving partial licenses to other companies that could produce those testing kits. So, the situation is one where more people are getting infected. We believe that the death count is underestimated. A lot of people are dying alone at home without a COVID test. People are still struggling to get death certificates.

So, you are dealing with a public health crisis in the middle of a global pandemic where inequality is soaring as a result of COVID and as a result of the socioeconomic effect of the lockdown. What we have in South Africa at the moment is increasing joblessness with increasing COVID infections. And the people who are most at risk are low-income workers who are required to reopen the economy, who have to rely on public transport, who have to go to work, who have to serve people who want to have the luxuries of a normal society.

So, like I said earlier, I think the fault lines of inequality in South Africa is coming to the fore, and the crisis of our health system, which, as you’ll recall, because of apartheid, is a dualized healthcare system that is basically based on race and class, where the rich can afford really high-quality private healthcare and the poor have to rely on high-quality but inconsistent access to healthcare services — we already have multiple provinces that are really taking strains. These are provinces we call the neglected provinces, where the health systems have basically collapsed, where the national government is probably going to have to intervene and step in and take over the running of those health departments.

AMY GOODMAN: Fatima Hassan, I want to thank you so much for being with us, South African human rights lawyer, HIV/AIDS and social justice activist, founder and director of Health Justice Initiative, previously served as special adviser to South Africa’s former minister of health. We’ll link to your piece in the Daily Maverick headlined “A Covid-19 vaccine: When 'solidarity' meets nationalist profiteering.”

When we come back, we go to Ethiopia to speak with the head of the Africa’s Centres for Disease Control. Stay with us.

AMY GOODMAN: “Stand Together,” an African anthem of solidarity against COVID-19. It features a wide swath of African musicians from around the continent, including Nigeria, Tanzania, South Africa, Cameroon, Angola, Ethiopia and Morocco. 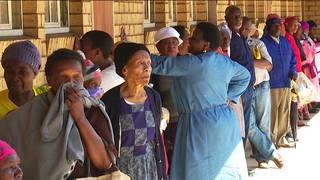