After massive public outcry against cuts to mail service ahead of November’s election, Postmaster General Louis DeJoy has announced he will suspend changes to the U.S. Postal Service until after the election, when a record number of voters are expected to cast ballots by mail. President Trump has admitted he’s working to undermine the USPS in order to make it harder to vote by mail in November. We speak with Lisa Graves, executive director of the policy research group True North Research, who says Louis DeJoy is “the most partisan person, in 100 years at least, to head the Postal Service” and warns that U.S. democracy is at stake. “We need to really hold this Postal Service accountable.”

StoryAug 10, 2020Is Trump Sabotaging U.S. Postal Service Ahead of Election as Part of His Attack on Mail-in Voting?

After massive public outcry against cuts to the U.S. Postal Service ahead of the election, Postmaster General Louis DeJoy announced Tuesday he will suspend the changes to the USPS until after the election, when a record number of voters are expected to cast ballots by mail.

House Speaker Nancy Pelosi called DeJoy’s move insufficient, saying it failed to reverse damage already done to the U.S. post office, and has called the House back into session for an urgent vote on the Postal Service scheduled for Saturday.

President Trump admitted last week he’s working to undermine the USPS in order to make it harder to vote by mail for the election.

For more, we go to Lisa Graves in Wisconsin. She’s executive director of the policy research group True North, author of the new report for In the Public Interest that looks at “The Billionaire Behind Efforts to Kill the U.S. Postal Service.”

We only have five minutes, Lisa Graves, but can you lay out what’s going on and the deep concern that, yes, Louis DeJoy, who has, with his wife, something like $75 million to $100 million invested in competitors and contractors to the U.S. Postal Service, that already major changes have taken place? They’re just revoking the ones that were leading up to the election, though they say they’ll introduce them right after.

LISA GRAVES: Well, that’s right, Amy. And I think that we’re at a true crisis point in terms of our democracy and with our Postal Service. And that’s because we have the most partisan person, in a hundred years at least, to head the Postal Service, in Louis DeJoy, who has deep financial conflicts and deep personal ties to President Trump. This is also being pushed forward by Mike Duncan, who was a major fundraiser for Mitch McConnell for the Senate Leadership Fund and is a right-wing partisan who helped stand up American Crossroads, and also at the instigation, in essence, of Steve Mnuchin, who has tried to push additional pressure on the Postal Service, in essence, in my view, to accomplish what really is Charles Koch’s long-term goal of privatizing our Postal Service. So, we have a deep crisis in our country.

The announcement by the postmaster does not reverse the things that have already happened, that he’s already implemented, including the removal of many mail sorting machines. And so, we need to really hold this Postal Service accountable. Actually, I think Louis DeJoy needs to be removed. And we need to reform the Postal Service so we do not have two of the most partisan men ever at the helm of our Postal Service.

That Postal Service belongs to us, even though Charles Koch, as I documented with In the Public Interest and Bold ReThink, that organization has been targeted by Charles Koch for privatization since the 1970s. So, I’m hoping that the members of Congress will respond to citizens who are clamoring to protect our Postal Service, make sure we get our ballots on time, make sure we get medicines on time and checks on time, and really reform the Postal Service and get it the money it needs to survive and thrive in this corona crisis.

JUAN GONZÁLEZ: And, Lisa Graves, in the few minutes we have left, could you talk a little bit more about this hidden effort by Charles Koch to privatize the Postal Service, that has gone on almost unknown by most Americans for so long?

AMY GOODMAN: Last minute, also, already, the effect — right now the Department of Veterans Affairs has been forced to find other ways to ship mail-order prescriptions to vets all over this country. And it’s not only vets. So many people rely on the Postal Service just to get medicine.

LISA GRAVES: Yes, it’s a true crisis. And I think that if Louis DeJoy thinks that he can issue a press statement and walk away from the damage he’s caused, he’s wrong. The American people are not going to tolerate the destruction of our Postal Service. Millions of Americans rely on it, in small cities and big towns, for medicines and checks. And we need it to work properly. We need it fully funded. We need it to have coronavirus relief just like other businesses and entities in America.

AMY GOODMAN: Were you surprised that the Postal Service turned around to the extent it did yesterday? I mean, we’re talking about massive outcry. Even Donald Trump, whose bidding DeJoy was doing, tweeted out, ”SAVE THE POST OFFICE!”

LISA GRAVES: Yeah, they’re clearly hearing the heat. So, the question, as Nancy Pelosi said, is: Will they reverse the things that have happened, not just stop doing it? Stopping it, we already see the damage done. The question is, a true reversal to the status quo before Louis DeJoy became the postmaster general this summer.

AMY GOODMAN: Lisa Graves, we want to thank you so much for being with us. And we have to stop saying November is the election, because people who vote by mail are voting in the next weeks, and that goes on for more than a month. Lisa Graves, executive director of the policy research group True North, with a new report we’ll link to, “The Billionaire Behind Efforts to Kill the U.S. Postal Service.”

Is Trump Sabotaging U.S. Postal Service Ahead of Election as Part of His Attack on Mail-in Voting? 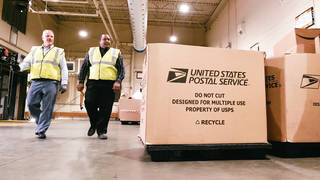 Is Trump Sabotaging U.S. Postal Service Ahead of Election as Part of His Attack on Mail-in Voting?