People held in immigration jails in Louisiana report horrific conditions and continued mistreatment after Hurricane Laura devastated the area. Immigrants detained at the LaSalle and Jackson Parish jails say that after the storm, the two facilities have flooded with urine and feces and lack electricity, clean food or water. Many of those protesting the conditions are from Cameroon, and refugee rights groups, including the Cameroon American Council, are demanding an investigation into conditions. “The current immigration system is based on the racist practices, the white supremacy of 400 years,” says Sylvie Bello, founder of the Cameroon American Council, one of the leading immigration advocacy groups working with Black and African communities in the U.S. She says it’s vital during a time of “racial reckoning” to fight for Black immigrants in ICE detention.

AMY GOODMAN: This is Democracy Now! I’m Amy Goodman, with Juan González. We turn now to Louisiana, where residents of areas devastated by Hurricane Laura may be forced to go weeks or months without power. And people held in immigration jails there report horrific conditions. Immigrants detained at the LaSalle and Jackson Parish correctional centers say the two jails are flooded with urine and feces after the storm. They don’t have electricity, clean food or water. This is a video posted on Facebook by a man inside the Jackson Parish detention center after Hurricane Laura.

IMMIGRANT DETAINEE: People are trying to run out because of the coronavirus. We’ve got 25 cases in Jackson Parish. The hurricane stopped up the water. No water, no electricity. Everybody’s going insane, all ICE detention centers. Please help if you can.

AMY GOODMAN: “Please help if you can,” he says. Two immigrants held at the Jackson Parish Jail, which is run by LaSalle Corrections, said they were held in the same cramped room as people with COVID-19 symptoms who later tested positive. At least eight new immigration jails have opened in Louisiana under Trump, and some that are former prisons. Some of the immigrants being held in Louisiana were transferred there from Florida after Immigration and Customs Enforcement refused to comply with public health safety guidelines and release people from a crowded detention center. Many are also from Cameroon.

And for more, we’re joined by Sylvie Bello, founder of the Cameroon American Council, one of the leading immigration advocacy groups working with Black and African communities in the U.S.

Sylvie Bello, welcome to Democracy Now! Can you explain the dire conditions, how many Cameroonians are in these jails, and what they’re facing now, especially after the hurricane?

SYLVIE BELLO: Bonjour, Amy. Hi. I just want to do the Wakanda salute, since Black Panther is African. Yes, this is a very timely discussion — thank you — especially for African Immigrant Heritage Month.

Right now we have about 10,000 Cameroonians at various stages of asylum seeking coming through the southern border, many of them coming through Tijuana on the California side and transferred to Louisiana. Right now at Pine Prairie, Louisiana, the detention center there, which is a privately owned detention center owned by GEO, there are over 40 Cameroonians, who are on hunger strike, Amy.

JUAN GONZÁLEZ: And could you talk about how the Black asylum seekers are disproportionately targeted by ICE and placed in these dehumanizing conditions?

SYLVIE BELLO: Absolutely. Well, Juan, as you know, the immigration system, as it is today, is as a direct result of Black people in America, right? Because 400 years ago, when our ancestors were stolen from the shores of Bimbia, Cameroon, and sold to the Americas, the U.S. banned immigration from Africa — right? — while the rest of the world could get immigration. Now fast-forward after the Haitian revolution. You know, to make sure that the enslaved Africans get no ideas of revolt in America, they put further bans within the immigration system. Now after the civil rights movement, we got the Immigration Act. So, what it is, is the current immigration system is based on the racist practices, the white supremacy of 400 years.

And so, when we have these Cameroonians that are essentially fleeing, you know, our ancestors being enslaved, they’re fleeing colonization, they’re fleeing foreign policy from just the heavy militarization from the U.S. from across the world, including Cameroon. And they get to America and are still being subjected to anti-Blackness, anti-Africanness, that, quite frankly, up to today, still favors non-Africans and non-Blacks. For instance, in California, you know, in detention centers like Adelanto and Otay Mesa, you have — everyone else gets bonds, but when it’s a Cameroonian, we just were part of an advocacy where we released the Cameroonians for $50,000 bond, $35,000 bond. The U.S. should not be charging that high of a bond for Black people, when, instead, they should be paying Black people reparation. And the reasons why they give these large sums for bonds, they say we don’t have family ties. How are we supposed to have family ties, Juan, when for 400 years we were banned from coming to America? How are we supposed to make those strong family ties like every other country that could come here all willy-nilly? So, those are just one of many, many, many ways.

And, of course, as you know — right? — in this time of racial reckoning, when we’re looking into the criminal justice system, it’s the same exact law enforcement within ICE — right? — where because Black communities are overpoliced, you know, as Black immigrants, who are part of that community — take [Abner] Louima, for instance, the Haitian immigrant. Take Amadou Diallo in New York, right? So, Black immigrants are part of the Black community and part of the African American community, which is overpoliced and racist. And that leads to higher deportation, as well as higher incarceration and just worse treatment, especially in places like in the South — right? — like in Louisiana, where a lot of the — if you look at from Katrina to Laura to coronavirus, the disparities in the Black communities are just heightened, and it’s no different in the immigration system and in detention.

AMY GOODMAN: I wanted to go to law enforcement officers clashing with protesters outside of the Pine Prairie ICE Detention Center last month in Louisiana, using tear gas and pepper spray to clear the protesters. This is an activist speaking with local news station KRQE.

PROTESTER: We are out here today to say that we are against this ICE concentration camp being in our state. We are against our tax dollars being used to cage people en masse for nothing other than from where they’re from. And we are saying that if you say this is the land of the free, why in Louisiana do we have more people incarcerated than any other place in the world? … My hands were up, and we were all tear-gassed for nothing but standing on the side of the road and using our right to free speech.

AMY GOODMAN: So, if you can talk, Sylvie Bello, about the Cameroon hunger strikers and also about the death of the Cameroonian immigrant Nebane Abienwi?

SYLVIE BELLO: Thank you so much. We are just so grateful to our friends at the New Orleans Workers Group and to Rebecca, who is a Cameroonian herself, out there in New Orleans, who showed up in solidarity on Freedom Friday. So, Juneteenth of this year — right? — at Pine Prairie, the Cameroonians led a protest. They tapped into those themes of freedom from their ancestors — right? — the last of their ancestors who got their freedom. They tapped into that and protested the racist judges in the immigration system, protested the racism within the detention system. And our friend — and so, from then on, every Friday, we have what we call Freedom Friday, where we have phone zaps, we have email blasts. And, you know, our friends, student solidarity, a hundred of them, yes, they were tear-gassed, but guess what: The men at Pine Prairie felt the love. They were banging on the doors, even though they were held in confinement so they could not go into the yard and see our comrades who were out there protesting for them in solidarity. They were banging on the door. They could feel the — they could feel the love that was coming out from the people of Louisiana. There were about a hundred of them out there, including, like I said, our fellow Cameroonian diasporan Rebecca.

So, what it is, is that these protests inside — right? — this is not the first time these Cameroonian men have protested anti-Blackness and anti-Cameroonianists. In February, during Black History Month, they protested. You know, they went on a hunger strike, as well. Prior to that — right? — throughout the route from Ecuador, they leave — they flee five armed conflicts in Cameroon, get to Ecuador and then trek eight countries to the U.S.-Mexico border. In Mexico, they are met with anti-Blackness. And that is why, at Tapachula, which is the southernmost part of Mexico, you know, the Cameroonians protested there. They protested, as well, in Tijuana. Why? Because just the system of getting into America is very rigid, in general, with MPP and Trump’s racist, racist policies. But also anti-Blackness does not stop in America. In Mexico, the Mexican government will let everybody else through except the Africans. So, these Cameroonians, by the time they get into the U.S. detention centers, are already known as troublemakers, right? They’re already known as, “Hey, you know what? We’ve got to watch out for them.”

And they’re not the only ones who protested or went on hunger strikes. Cameroonian women at Hutto Detention Center on the outsides of Austin, Texas, 150 of them protested the same racist and anti-Blackness within the detention center. Right now they are on hunger strike. And it’s really been terrible because they’ve been put on solitary confinement. And what happens in solitary confinement is that you get — you know, because already you are on hunger strike, ICE does not want you doing that — right? — because they want you alive, they want you fed. And they are saying, you know, if they’re going to get deported, if they’re going to go through all of these trials and tribulations after they’ve crossed eight countries to get here —

SYLVIE BELLO: — they want to use their bodies as resistance.

SYLVIE BELLO: We are, you know, so grateful for this platform, Amy. We would love for folks to join us every Friday for Freedom Friday. The men in detention, with Laura, with Hurricane Laura, in Louisiana have experienced tremendous, tremendous outbreaks of not just coronavirus, but other forms. For instance, they have no running water right now. They have —their medications are being kept. We have a young man who has been there for two years.

AMY GOODMAN: Sylvie Bello, we’re going to have to leave it there, but I thank you so much, and we’ll continue to follow this story. Founder of the Cameroon American Council. That does it for our broadcast. I’m Amy Goodman, with Juan González. Stay safe. Save lives. Wear a mask. 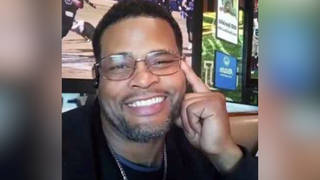