What Went Wrong with AstraZeneca’s Vaccine Trial? CEO Only Shares Details with Investors

As the world races to find a COVID-19 vaccine, one of the most promising vaccine trials has hit a major roadblock. AstraZeneca paused its Phase 3 COVID-19 vaccine trial after a woman in the trial developed severe neurological symptoms consistent with transverse myelitis, or inflammation of the spinal cord. Details were only revealed during a CEO call with investors, and “everyone was left to guess what went wrong,” writes Ed Silverman, senior writer at the health news site STAT, which broke the story. Silverman says the halting of the U.K. trial raises several issues, including whether pharmaceutical companies are being pushed to move faster than is safe. “Is the FDA being pushed to authorize or approve a vaccine faster than it should?”

AMY GOODMAN: This is Democracy Now! The Quarantine Report. I’m Amy Goodman, as we turn now to look at why AstraZeneca paused its Phase 3 COVID-19 vaccine trial in the United Kingdom, widely considered one of the most promising trials, and what we know. AstraZeneca only revealed initial details during a private phone call between the CEO and the investors, saying a woman in the trial developed severe neurological symptoms consistent with transverse myelitis, or inflammation of the spinal cord. This was first reported by the medical news site STAT.

For more, we’re joined by STAT senior writer Ed Silverman, whose column this week is headlined “'Everyone was left to guess what went wrong': An open letter to AstraZeneca’s CEO on transparency.”

Ed Silverman, thanks so much for joining us. Tell us what you’re demanding of the CEO, and explain exactly what happened. Many people heard AstraZeneca’s trial was halted, that it’s doing with the University of Oxford, but not understanding why and how serious myelitis is, whether or not it’s connected to this trial.

ED SILVERMAN: Well, there’s an issue here — first of all, again, thank you for having me. There’s an issue here — several issues here. The whole world is watching right now what is happening with vaccine development. And normally when there is a halt in a clinical trial — which is a serious matter, typically — a company has to disclose certain developments to regulators, to trial participants and to investors, if it’s considered what’s called material information, something that could materially affect the business operations.

And in this particular case, the company, on Tuesday — well, we reported on Tuesday that the company halted the trial. And at that point, the company let out only a little bit of information, and only in response to calls from reporters. On Wednesday morning, the company put out a rather bland general statement calling this situation a routine matter. And at the same time, though, the CEO, as you mentioned, was on a private call with investor clients from JPMorgan.

So, that raised a whole bunch of issues in my mind, because, as I started to say, the whole world is watching this vaccine development right now. And this is in the context of several debatable controversies, one of which is the extent to which the vaccine companies are being pushed to move faster than they should — rather, move faster to get a vaccine out as quickly as possible. But at the same time, the FDA is being bullied by the Trump administration, particularly in President Trump, to get a vaccine out there as quickly as possible. And conveniently, he keeps talking about a vaccine before the election. So, if you connect the dots, you look at the situation and say, “OK, we’ve got a pandemic. Most people want a vaccine as quickly as possible. But is the FDA being pushed to authorize or approve a vaccine faster than it should?” There are standards that are in place, no matter what, to have safety and effectiveness data. Now, yes, we can’t wait years for that to emerge, but we also don’t want a vaccine before it’s time.

And that plays into yet another issue, which is trust. The American people are already divided over vaccines generally – the anti-vaxxer crowd, as they’re called. And now there is growing concern that if the administration, Trump in particular, is trying to get a vaccine out faster than it should be out, and is leaning on the FDA to do so, that will have another reason to not trust vaccines. And stepping back, the issue there reflects on AstraZeneca, but also the pharmaceutical industry at large, which has already taken a severe hit with its reputation for the last several years over drug pricing.

So, instead of thinking of the greater good and instead of addressing, being concerned with these issues — because these are all societal issues. And it’s really — and it’s not just the United States. The AstraZeneca CE acted as if it’s business as usual: “Oh, we may have material information” — or maybe they didn’t consider it material But in any event, he released a few more details, selectively, to the investor crowd. And what were those details? He indicated that, as you said, the side effect that was discovered in this one trial participant is consistent with transverse myelitis. And that could be a first sign of multiple sclerosis. So, we need to know —

AMY GOODMAN: Is it also similar to Guillain-Barré?

ED SILVERMAN: Right. And we need to know more information about that. Other researchers need to know. Other companies that are using the same vaccine technology or platform, they want to know what’s going on. Does this affect them? Does this affect other people’s willingness and ability to enroll in one or more clinical trials by that company and others? So, there are a lot of implications here. And again, as I said, he treated it as business as usual, thinking of the greater good, instead of trying to address concerns that can show up with lack of transparency, and therefore lack of trust.

AMY GOODMAN: So, Ed, we just have a minute, but poll just done says well over 60% of the America population doesn’t trust the FDA to approve a safe vaccine, just as President Trump pushes to get this done — he’s very open about this — before the November election. What do you think is the most important issue, as you’re demanding of the CEO of AstraZeneca, to go along a safe path?

ED SILVERMAN: Well, I think the companies, not just AstraZeneca, have to continue to adhere to what they’ve already said in a public pledge released last week, to follow the usual rigorous standards for safety and effectiveness that the FDA pursues. The FDA is not perfect — no agency is — but that’s a gold standard. And that is not just for the benefit of the drug companies, but presumably it’s a benefit for the public. So, I think that that’s crucial here.

AMY GOODMAN: Ed Silverman, I want to thank you for being with us, senior writer and columnist at StatNews.com. We’re going to link to your latest piece, “'Everyone was left to guess what went wrong': An open letter to AstraZeneca’s CEO on transparency.” 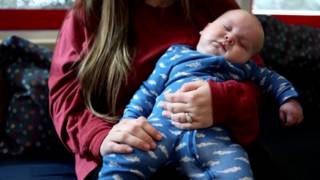