Image Credit: ”No Más Bebés"
This is viewer supported news. Please do your part today.
Donate

As immigration authorities say they have stopped sending women to a Georgia gynecologist accused of sterilizing female prisoners without their consent, we continue our look at United States’ disturbing history of forced sterilization with the producer and historian behind the 2016 documentary called “No Más Bebés,” which tells the story of how a whistleblower doctor spoke out about a large number of tubal ligations performed on mostly Latinx patients at the Los Angeles County+USC Medical Center some 46 years ago. “Quite often they did not understand the terminology. They did not, in some cases, understand the language,” says Virginia Espino. “They didn’t quite know what was happening to them.” She notes, “It feels like definitely the Georgia case is mirroring what had taken place in Los Angeles. You had people not fully understanding the procedures that were being performed on them.”

AMY GOODMAN: In Georgia, immigration authorities have stopped sending immigrant female detainees held in the Irwin County Detention Center to a gynecologist accused of sterilizing the women prisoners without their consent. Dr. Mahendra Amin reportedly saw at least 60 women detained at the ICE jail, which is run by the private prison company LaSalle Corrections. On Tuesday, we interviewed the whistleblower nurse, Dawn Wooten, who worked at Irwin and said that women held there called Dr. Amin a, quote, “uterus collector.”

Well, for our next guest, the news that a doctor had given immigrant women unwanted sterilizations sounded eerily familiar. Virginia Espino is the producer of the documentary No Más Bebés, or No More Babies. This is the film’s trailer.

NARRATION: In East Los Angeles during the late 1960s and early 1970s, women were going to the county hospital to give birth. Some went home sterilized.

DAUGHTER: [translated] What makes you sad being here?

MARÍA HURTADO: [translated] Who knows why? But I do feel sad.

REPORTER 1: This baby boy became a citizen one minute ago. His mother does not have immigration papers.

REPORTER 2: Were told they should be sterilized to save taxpayers welfare money.

REPORTER 3: Something drastic must be done about population growth.

CONSUELO HERMOSILLO: The doctor walked in and said, “We cut your tubes.” And I said, “Why?” He goes, “Well, you signed for it.” I said, “Me?” I go, “I don’t remember nothing.” And I didn’t tell my family. I didn’t tell anybody.

DR. BERNARD ROSENFELD: They were extremely fearful, being told that you need an emergency cesarean section and you can feel blood pouring down your leg, at that time signing a consent for tubal ligation.

REPORTER 4: This is the emergency department of Los Angeles County+USC Medical Center.

ANTONIA HERNÁNDEZ: Some of them signed right in the midst of labor. Some of them don’t even remember signing. Here I, as this young lawyer, am for the first time telling them, “Do you know that you’ve been sterilized?”

We are suing HEW for noncompliance or nonenforcement, nonmonitoring of the sterilization regulation.

It was just the beginning of the emergence of the civil rights movement in the Latino community.

GLORIA MOLINA: We were talking about abortion rights, all of the issues of feminism at that time. The idea that somebody could be forcibly sterilized seemed like something out of a mental institution out of the 1920s.

DR. MICHAEL KREITZER: To claim that we’re part of a greater goal of sterilizing the Mexican population that immigrates to Los Angeles, I mean, I’m offended by that. That’s not what we did.

CONSUELO HERMOSILLO: The way I felt when I was young, it doesn’t change the way I feel in my heart now that I’m older. But it’s there all the time. It’s like when you bury somebody: You’re always going to carry it on your head.

AMY GOODMAN: That’s the trailer for No Más Bebés, No More Babies. It aired on PBS’s Independent Lens in 2016, tells the story of how some 46 years ago a whistleblower doctor spoke out about a large number of tubal ligations performed on mostly Chicana patients at the Los Angeles County Hospital. Dr. Bernard Rosenfeld observed many women who came to the hospital for emergency C-section deliveries left the hospital sterilized. Ten women of the women filed a class-action lawsuit in federal court in a case known as Madrigal v. Quilligan. In this clip from the film, we hear from plaintiff María Hurtado.

MARÍA HURTADO: [translated] That’s what I heard them saying: “No more! The Mexican women are having too many kids!” And they were having to figure out a way to slow it down.

MARÍA HURTADO: [translated] The only thing that the doctor said was, “Mama, Mama,” because he wouldn’t say, “Sign here or here.” They couldn’t say anything. They only signaled, “Mama.”

AMY GOODMAN: One of the women who was sterilized without her consent in the ’70s at the Los Angeles County+USC Medical Center.

For more, we go to Virginia Espino, the film’s producer, lead historian. She’s also a lecturer with the UCLA Department of Chicana, Chicano and Central American Studies. She made the film with her friend, the Academy Award-nominated filmmaker Renee Tajima-Peña. Before then, the women in the lawsuit had not had much opportunity to describe their experiences.

Welcome to Democracy Now!, Professor Espino. It’s great to have you with us. If you can lay out what happened and what this lawsuit was about and what came of it?

VIRGINIA ESPINO: It was — the events occurred in the early 1970s, when women would go to the L.A. County Hospital for emergency cesareans. So, the L.A. County Hospital wasn’t a place where people would go and plan to deliver their child. In some cases, you did have people opting for that as a safe place, but you had other people going there because they were in pain, in trauma, they were bleeding, they were having complications.

And that was the case of the Madrigal 10, who would eventually file a lawsuit against the hospital. They would go to the hospital for an emergency cesarean in full labor. And at that time, they were approached by hospital staff, sometimes doctors, sometimes nurses, sometimes social workers, about signing consent forms for tubal ligation. Quite often they did not understand the terminology. They did not, in some cases, understand the language. Many of them spoke primarily Spanish. And in some cases, they were just under duress from pain from labor, and so they didn’t quite know what was happening to them. In one case, for example, Melvina Hernández went for three years after her tubal ligation wearing an IUD, because she did not know she had that surgery performed on her.

JUAN GONZÁLEZ: And, Professor Espino, could you talk somewhat about the difficulty you had in actually documenting what had happened, and the problems you had in accessing records of what had occurred? As I mentioned in yesterday’s show, this kind of stuff had been happening in Puerto Rico in the late 1940s and early 1950s, this mass sterilization of Puerto Rican women of childbearing age on the island. But again, finding the documentation was always difficult.

VIRGINIA ESPINO: Well, in this case, I think it’s unique, because you had the explosion of the Chicana and Chicano movement occurring at the same time that these sterilizations were made public. So you had people conscious, consciously saving these records.

Professor Carlos Vélez-Ibañez donated his expert witness testimony to UCLA Archives, the Chicana and Chicano Research Center there. And he made available court testimony. He made available — some of the audio that you hear in the film was what he recorded when he was an expert witness. He actually interviewed the women in the 1970s, and he saved all that material and donated it to the library.

JUAN GONZÁLEZ: And in terms of when you hear what’s been going on at the Irwin Detention Center in Georgia now, putting what’s happening currently in context from the history that you’ve mined here, could you make some connections there?

VIRGINIA ESPINO: Absolutely. It feels like definitely the Georgia case is mirroring what is taking place — or, what had taken place in Los Angeles. You have people not fully understanding the procedures that are being performed on them. You have miscommunication. You have a code of silence. Thankfully, you have a whistleblower who is breaking that code of silence. But at the L.A. County Hospital in the 1970s, you had a code of silence where people did not speak out against this abuse. People normalized approaching women while they were in labor, and asking them to sign over their fertility. You know, that was a normal practice that was taking place on a day-to-day basis. And nobody —

AMY GOODMAN: And, of course, the consent form was in English. While they lost a lawsuit, this wasn’t before a jury, but before one judge, a white male judge.

AMY GOODMAN: Talk about the changes that resulted from the bravery of these women coming forward.

VIRGINIA ESPINO: It really rallied the community. You had protests. You had the newspaper covering this issue at a time that it didn’t really cover the ethnic Mexican community. You had a waiting period implemented so that it became illegal to approach a woman while she was in labor regarding tubal ligation. So, a 72 waiting period was implemented. You also had recommendations or legislation put into place that required consent forms be in the language of the patient. So, some of those were monumental changes that occurred because of this lawsuit and because these women came forward.

AMY GOODMAN: Well, Virginia Espino, we have to leave it there, but we encourage people to see this amazing documentary, producer and lead historian for the film No Más Bebés, No More Babies, lecturer with the UCLA Department of Chicana, Chicano and Central American Studies. The film aired on PBS Independent Lens in 2016, is now available on demand on Vimeo in both English and Spanish. We will link to it.

That does it for our show. I’m Amy Goodman, with Juan González. Stay safe. Wear a mask. Save lives. 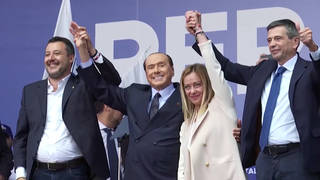