President Trump’s nomination of Amy Coney Barrett to the Supreme Court could threaten reproductive rights across the U.S., according to Planned Parenthood president and CEO Alexis McGill Johnson. Barrett, who once called abortion “always immoral,” would give conservatives a decisive 6-3 advantage on the top court if she is confirmed by the Senate, and President Trump has openly promoted her nomination by suggesting she would help overturn the landmark 1973 ruling in Roe v. Wade that legalized abortion in the U.S. Barrett “would be a huge threat to reproductive rights” on the Supreme Court, says McGill Johnson. “Reproductive healthcare is healthcare. And the most immediate threat that we are facing in the time of a pandemic is the fact that the ACA, which has been one of the biggest advancements for women’s health across the board, is also under attack.”

AMY GOODMAN: As we continue our coverage of President Trump’s nomination of Amy Coney Barrett to the Supreme Court, we turn now to look at how her confirmation poses a threat to reproductive rights. On Sunday, President Trump appeared on Fox & Friends and was asked about the future of Roe v. Wade.

PETE HEGSETH: Do you think a 6-to-3 court with three of your picks on there, Mr. President, would potentially rule on a life issue, on a Roe issued?

PRESIDENT DONALD TRUMP: It’s certainly possible, and maybe they’d do it in a different way. Maybe they’d give it back to the states. You just don’t know what’s going to happen.

AMY GOODMAN: “Maybe they’d give it back to the states. You just don’t know what’s going to happen.”

Welcome back to Democracy Now!, Alexis McGill Johnson. Can you respond to what Trump just said — to throw it back to the states?

ALEXIS McGILL JOHNSON: Yeah. I mean, look, we certainly know that Judge Barrett — a Justice Barrett would be a huge threat to reproductive rights. She’s been an active and vocal critic of Roe v. Wade and suggested that it would not be — it was settled wrongly. And we also know that there are 17 cases that are a case away from the Supreme Court, that could overturn, if not irrevocably create restrictions around access to abortion.

So, what it would mean is that if Roe were overturned, that there would be some states where if you decided you wanted to start or expand your family, those would be within your domain of decisions that you would be making with your partner, with your — you know, and with your medical provider, and in other states you would essentially be forced into pregnancy if you didn’t have the resources to access abortion. So, I think that those are the challenges that we are facing here.

And I also think that, you know, just to tie it back to the other conversation you were having around healthcare, reproductive healthcare is healthcare. And the most immediate threat that we are facing in the time of a pandemic is the fact that the ACA, which has been one of the biggest advancements for women’s health across the board, is also under attack. And the threat of that, I think, in combination with the impact it could have on abortion access, is really significant with this judge.

AMY GOODMAN: I mean, this is absolutely critical, because the ACA is going to the Supreme Court on November 10th — not clear whether Trump’s nominee will be seated at that point. But talk about the issues at stake, if Obamacare was struck down. We have just passed two crisis numbers: 200,000 deaths from COVID-19 and 7 million — over 7 million infections. We’re talking about how many more millions of people will be suffering from preexisting conditions alone. Can you talk about all of this?

ALEXIS McGILL JOHNSON: Yeah. First of all, we don’t even know enough about coronavirus, right? We’re just trying to focus right now on how not to get it. But, I mean, we don’t know the long-term impact of that. So, coronavirus itself is a preexisting condition.

And, you know, the other things that ACA afforded us were Medicaid expansion; for women, it guaranteed birth control coverage; it guaranteed that there wouldn’t be discrimination, that women wouldn’t have to pay more for our healthcare than men; and for many of us, you know, who have been able to take advantage of our older children being able to stay on our health plans until age 26. There have been lots of ways in which that has actually created an expanded access to healthcare for many Americans. And what’s at stake is that almost 30 million Americans could lose health insurance, at a time, again, when we’re in a pandemic.

And so, I think when you look at the conversations that Americans are having right now, first of all, they’re saying this confirmation should wait until after inauguration. And they’re also saying, like, if you have this time to rush through a confirmation of a justice and hold these hearings as the Senate, why don’t you have the same amount of time to rush through COVID relief, to think about comprehensive COVID testing so that we can all actually restore a little bit more of a new normalcy around getting back to work and our schools?

AMY GOODMAN: And the issue of Roe v. Wade, exactly what is Judge Amy Coney Barrett’s record on choice and contraception?

ALEXIS McGILL JOHNSON: Yeah, again, I think that Justice Barrett — Judge Barrett, rather, has been very critical of how Roe v. Wade was decided. She believes that abortion is always immoral. She has suggested that she would — from the bench, she would judge based on the Constitution and the law, but yet she writes one thing and says the other. We know that in her writings, particularly about the impact of what it means to be a Catholic judge, is that judges, when they don’t believe in the law because of their personal beliefs, that they should not uphold the law.

So, the real threat that we are seeing is the impact that she could actually use her personal beliefs to undermine rights for millions of people seeking abortion. And if Roe is overturned, we know that there will be 25 million women of reproductive age in states that would have to travel outside of their own states to access basic reproductive healthcare, to access healthcare.

We already saw it also, Amy, during COVID. You know, that, I think, was an important precursor for what could possibly happen, when a lot of these same states that have trigger laws would — you know, essentially, those governors created executive orders banning access to abortion, saying it wasn’t time-sensitive procedure. And so we saw people getting in their cars. We saw them driving upwards of 16 hours, from Texas to Colorado to California, just to get access, in some cases, just to medication abortion. So, we already know what it looks like, right? We know that people will not stop having abortions, that we’re just putting a much more significant burden on their ability to access one.

AMY GOODMAN: Alexis McGill Johnson, what do you think Democrats should do right now?

ALEXIS McGILL JOHNSON: Look, I agree with the previous guest. I think that, you know, we need to put it all on the line for this judge. We have to ensure that we are pushing this nomination until the inauguration. That is what the majority of Americans want. And I think that the Senate Democrats should do exactly that, that they should not participate in the process. They should not give this legitimacy. And to the extent that we can push this to where the American people want this nomination to happen, I think that would be the most important thing right now.

AMY GOODMAN: And I know there’s a whole battle within the community, the pro-choice community — and we should say — and I wanted to ask you about this — the vast majority of people in this country are pro-choice. And that includes Catholics. But the Supreme Court and a number of legislatures around the country, to say the least, are not. What about this division?

ALEXIS McGILL JOHNSON: Look, I think this is about, essentially, a power grab that has happened over the last decade, that really does thwart the will of the people, right? Since the 2010 Congress and the gerrymandering that happened subsequently, we have seen a number of state legislatures across the country where a vocal minority has the levers of power.

And there is no state — it’s not just the national numbers that 77% of Americans support Roe as the law of the land. You know, there is no state in the country where people don’t believe that Roe should be the law of the land. So, you know, the idea that we have all of these states that are not reflecting the will of the people, we now have a judiciary that has been remade under Mitch McConnell, where over 200 justices have been placed onto the court, and, you know, in incredibly conservative ways, some of them who don’t even believe in IVF, much less in access to abortion. And I think those are the things that we are very concerned about.

So, I think it’s really important to think about the kind of ultimate power grab of now trying to seat a justice on the Supreme Court who also does not believe that Roe was correctly decided, and believes that abortion is immoral, and how that will tilt the balance of the court completely out of sync with where the American people are.

Next up, we look at new bodycam footage raising questions about the investigation into the police killing of Breonna Taylor. Stay with us. 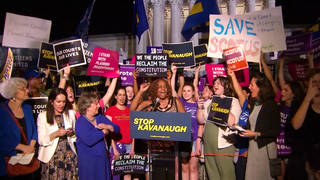