As the United States breaks all records for coronavirus cases, the Centers for Disease Control and Prevention warns another 92,000 could die in the next three weeks as complaints grow over the slow distribution of COVID vaccines. Across the country, hospitals are overflowing, and ICU beds are in short supply. In Los Angeles County, an epicenter of the outbreak, a staggering one in three residents has gotten the coronavirus since the start of the pandemic, according to new data. For more on the pandemic, we speak with epidemiologist Dr. Ali Khan, dean of the University of Nebraska Medical Center’s College of Public Health and the former director of the CDC’s Office of Public Health Preparedness and Response, where he oversaw the Strategic National Stockpile. He says that despite the grim statistics in the United States, other countries with more proactive pandemic responses have shown that it is possible to bring the virus under control and largely return to normal life. “We can do that same thing here in the United States if we use good science,” he says.

StoryApr 29, 2022“We Created the Pandemicene”: Ed Yong on How the Climate Crisis Could Spark the Next Pandemic

More than 8,000 Americans have died from COVID-19 in the last two days alone. Experts believe the outbreak will get even worse before the effects of vaccines are felt. The Centers for Disease Control and Prevention warns another 92,000 people could die in the next three weeks as complaints grow over the slow distribution of vaccines. In an effort to speed up the vaccine rollout, the CDC has expanded its guidelines to include eligibility for anyone 65 or older, as well as those with some underlying health conditions.

For more, we go to Omaha, Nebraska, on the rollout around the world and in the U.S. We’re joined by Dr. Ali Khan, epidemiologist and dean of the College of Public Health at the University of Nebraska Medical Center, where he joins us now. He’s the former director of the CDC’s Office of Public Health Preparedness and Response, where he oversaw the Strategic National Stockpile.

Dr. Khan, welcome back to Democracy Now! So, you have these new CDC guidelines — anyone 65 or older can get this vaccine, or people with comorbidities, with underlying problems, below that, as well as, of course, teachers and healthcare professionals — and the Biden decision, as well as the Trump administration decision now, to just release everything, not to save half for people to go back and get their second dose for the Moderna and the Pfizer vaccines, which requires two doses for the full protection. What are your thoughts about this?

So, this really helps to balance the supply-demand mismatch we’re seeing across America. So, there have been approximately 30 million doses distributed, but only about 10 million doses actually administered. So I think the overall national number is 30% of doses that have been distributed have been administered. And we’re seeing, again, great variability across states, actually a fourfold variability, in their ability to get this vaccine out. So, by releasing all the vaccine, you take care of addressing issues where sites have more people than vaccine. And by increasing the number of people who are eligible, you take care of sites that are throwing away vaccine because they can’t give it to anybody. So it addresses some of the mismatch, but there’s a real concern here.

So, the first concern is, this in no way addresses the continued operational insufficiency we are seeing at local and state level. Do they have the processes and procedures in place to enroll these people, vaccinate them and track them? I also have a slight concern about trust. So, by increasing the people who are eligible, that’s approximately 150 million people who have just now been made eligible. What’s not going to happen is there isn’t going to be 300 million doses of vaccine that are about to be released tomorrow. So these individuals still are going to get vaccinated over the next couple of months, and so we need to remind people that this doesn’t mean you can get vaccinated tomorrow.

The other concern is from the manufacturing standpoint. So, we’ve had a mismatch between distribution and administration, but there’s also the concern of a mismatch now between manufacturing and administration, because we know one vaccine is not sufficient. You need to get two vaccines. And so, will manufacturing be able to keep up with all of this increased demand for vaccine? So, it’s not a panacea. It’s not a solution. It will help some of the problem, but the fundamental issues around improving operations remain.

NERMEEN SHAIKH: And, Dr. Khan, could you comment also on the reports that some health workers, who were, of course, the first among those to be offered the vaccine — that some health workers have been refusing the vaccine? That’s one point. And then the second issue is what we know about those who have received both doses of either vaccine, the likelihood of them still being able to spread the virus, if they become infected?

DR. ALI KHAN: So, those are excellent questions. We should not be surprised that there’s vaccine hesitancy in the United States, including amongst healthcare workers. As we heard from your last guest, there’s been a significant polarization and politicization of this response, and often that hesitancy sort of cleaves along ideologic lines. In our facilities here in Nebraska, we’ve almost had over 95% compliance, so people are lining up to get vaccinated. So, we need to be careful about anecdotes about who does or does not want to get vaccinated.

The good news is that for people who are getting two doses of vaccine, a recent report suggests that they’re likely protected for a year, which is excellent news about the vaccine. We do not yet have the data if getting vaccinated prevents disease transmission. So, you could get vaccinated, you may have mild to asymptomatic disease, but you still could be infecting other people. We just didn’t have enough time to collect that data, and often that data is collected after the fact as vaccine is administered within the community.

So your question is a great reminder that even with vaccination, we still need to make sure that people are wearing masks, that they’re social distancing, that they’re washing hands, and a great reminder that there’s 1.7 billion people right now who wake up with near-zero cases and zero deaths. They go to live sporting events. Their economies are growing. And we can do that same thing here in the United States if we use good science, if we’re data-driven. And we won’t need a whole lot of vaccine to drop this tragic number of cases we continue to see in the U.S. And I believe, for the third time in a row, we’ve had over 4,000 deaths in a single day from a completely preventable disease.

AMY GOODMAN: The terrible fear that now flattening the curve means going straight up. What about, Dr. Khan, if you’re getting two vaccines? Johnson & Johnson apparently now has a one-shot vaccine, and they are just about to make an announcement about that. But if you get the Pfizer, for example, what if you go back, and they only have the Moderna? Are the studies done that show that this is OK to mix and match?

DR. ALI KHAN: No, there are actually no studies available that suggest it’s OK to mix and match. And this is a lot of effort at the local health departments to make sure you go back and get the exact same vaccine.

Good point also about Johnson & Johnson. That vaccine would be a game-changer, if the Phase 3 studies suggest that it’s efficacious and safe to give to Americans. It’s a single dose. There’s not these issues about refrigeration — freezing, maintaining these vaccines under frozen conditions. And it does allow the more typical mindset of mass vaccination campaigns, because you don’t need to have a relationship with the people who you vaccinate, and you don’t need to follow up with them. You just need to give them that one dose. So, hopefully, we’ll hear good news in the next couple of weeks on the Johnson & Johnson vaccine and their commitment to supply approximately 12 million doses by the end of February.

AMY GOODMAN: And let’s not forget, as the World Health Organization has pointed out, of the 46 countries that started vaccinating their populations, only one is low-income — a future discussion. Tomorrow, we’ll be joined by Dr. Peter Salk, the son Jonas Salk, the inventor of the polio vaccine. Dr. Ali Khan, thanks so much for being with us, from Omaha, epidemiologist and dean of the College of Public Health at the University of Nebraska Medical Center, former director at CDC. 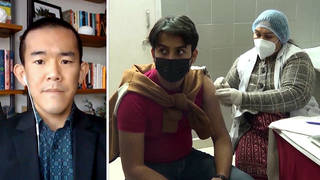