A damning new report shows that one of the leading COVID-19 vaccine makers appears to have played a role in restricting access to those very vaccines. The report, “Pfizer’s Power,” published this week by the consumer advocacy group Public Citizen, examines Pfizer’s contracts with the United States, United Kingdom, European Commission, Albania, Brazil, Colombia, Chile, Dominican Republic and Peru. They offer a rare glimpse into the power Pfizer has to silence governments, throttle supply, shift risk and maximize profits in the middle of a public health crisis. We speak with Public Citizen researcher Zain Rizvi, author of the new report.

We look now at how one of the leading COVID-19 vaccine makers appears to have restricted — appears to have restricted access to those very vaccines. The People’s Vaccine Alliance says just 14% of the 1.8 billion doses rich nations promised to donate have been delivered so far. And this week Germany said it expected to miss its target to donate 100 million doses this year, due in part to legal restrictions imposed by vaccine manufacturers.

Some of these restrictions are detailed in a new damning report by the consumer group Public Citizen called “Pfizer’s Power,” that looks at Pfizer’s contracts with the United States, United Kingdom, European Commission, Albania, Brazil, Colombia, Chile, Dominican Republic and Peru. They offer a rare glimpse into the power Pfizer has to silence governments, throttle supply, shift risk and maximize profits in the middle of a global public health crisis.

For more, we’re joined in Washington, D.C., by Zain Rizvi, law and policy researcher for Public Citizen, author of this new report.

Lay out for us your findings, Zain.

ZAIN RIZVI: We are in the worst public health crisis in over a century, and Pfizer has used its monopoly over a life-saving vaccine, a remarkable vaccine, to extract really concerning concessions from desperate governments around the world. And so we detail six examples. And I should say that the contracts are mostly the same, but there are variations within each contract. But almost all the contracts contain, for example, a provision that allows Pfizer to control, essentially, what is said about the contracts. Almost all the contracts contain a provision that says, if there is a vaccine shortage, then Pfizer gets to unilaterally decide what the priority of deliveries is, and the countries will simply accept those terms. There’s provisions about donations, and Pfizer gets to say whether a country can either donate a Pfizer vaccine or even accept a donated Pfizer vaccine. And so, there’s just all kinds of things in these contracts.

We’re talking to Zain Rizvi, law and policy researcher for Public Citizen. He’s author of the new report, “Pfizer’s Power.” I think we might have just lost him, and we’re trying to get him back up.

It is a very important report on how Pfizer has silenced governments while maximizing profits during the pandemic. It goes on to talk about the Brazilian government accepting a contract with Pfizer that contains most of the same terms that the government once deemed unfair. Brazil waived sovereign immunity, imposed no penalties on Pfizer for late deliveries, agreed to resolve disputes under a secret private arbitration under the laws of New York, and broadly indemnified Pfizer for civil claims. Brazil’s contract says it can’t make any public announcement concerning the existence, subject matter or terms of the agreement, or comment on its relationship with Pfizer without Pfizer’s prior written consent. It sounds like Pfizer is far more powerful, Zain, than any of these countries.

ZAIN RIZVI: And that’s the tragedy here — right? — that governments around the world have propped up Pfizer by awarding government-granted monopolies and enabling a system of international intellectual property protection that empowers Pfizer. And so, you have Pfizer becoming king, in a sense. And that is outrageous in this pandemic.

AMY GOODMAN: We’re going to end this discussion here, but we’re going to continue and post it online right after the broadcast at democracynow.org. Zain Rizvi is law and policy researcher for Public Citizen. He’s author of the new report, “Pfizer’s Power.”

And that does it for our show. Democracy Now! has two full-time job openings: director of finance and administration, as well as a human resources manager. You can learn more and apply at democracynow.org. 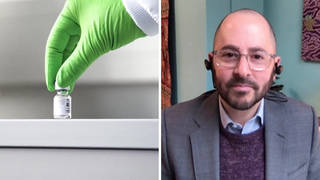