Jeremy Menchik, a self-described “human guinea pig” who volunteered for Moderna’s COVID-19 vaccine trials, dropped out to protest the company’s greed in reaping profits from the ongoing pandemic while doing little to resolve global vaccine inequity. Menchik is launching a new website — mrna4all.org — where other vaccine trial participants can join the effort to pressure vaccine makers to scale up production to vaccinate the world. “That they have to be accountable to their guinea pigs and they have to advance policies for public health not just private profit … I think that must be unnerving to them,” says Menchik, an associate professor at Boston University. “We have to treat this pandemic as a global crisis, as a global public health emergency.”

“Confessions of a 'human guinea pig': Why I’m resigning from Moderna vaccine trials.” That’s the headline of an essay our next guest wrote in the medical news website STAT, which has gotten worldwide attention. He writes, quote, “In July 2020, I volunteered to be in Moderna’s Covid-19 vaccine trial. If I knew then what I know now about the company’s quest for profits, I wouldn’t have done that.” He’s now heard from dozens of other trial volunteers who share his concerns. They’re launching a campaign today for other trial participants who want to get involved.

Jeremy Menchik is associate professor at Boston University’s Pardee School of Global Studies and joins us now for his first interview about his decision.

Welcome to Democracy Now!, Professor Menchik. Can you talk about why you first went in, how the study worked, and why you’ve decided to resign?

JEREMY MENCHIK: Good morning, Amy. Thank you so much for having me.

I volunteered because, as you remember, March 2020 was a scary time. It was disorienting. And I thought anything that I could do to help, you know, get us out of this pandemic nightmare was an ethical imperative. You know, my wife is a nurse practitioner. She was working in Dorchester, the hardest-hit part of Boston in terms of COVID-19. And so, we faced just imminent pressure from the virus.

But on my way to work, I would drive by Longwood Medical Center. And living in Boston, you’re very much aware of the power and the importance of these enormous hospitals and companies that are doing groundbreaking research on vaccines and other technologies. So I thought, you know, as a professor of international relations, I don’t have much to contribute to public health, but I could donate my body. I could use my blood as a volunteer in the trials. And I thought it would do some good.

AMY GOODMAN: I just want to ask you to take your microphone that you’ve put behind your head and put it in front of you. This is what it is like to broadcast in a pandemic, where people aren’t in studios, but we’re all makeshift, and our guests are at home. We’re talking to Jeremy Menchik, who wrote this piece in Stat News, “Confessions of a 'human guinea pig.'” So, can talk to the — can you give your response to the Moderna CEO, Stéphane Bancel, who said the company expects to record sales of about $18.5 billion from contracts for its COVID-19 vaccine and $3.5 billion from potential additional purchases, including booster shots updated for variants?

The second thing I would say, however, is: Use that enormous profit — right? — the estimated profit revenue that Moderna is going to bring in in 2022 is between $15 billion and $18 billion — use that amazing profit to change the world — right? — so that this vaccine isn’t just a privilege for people in rich countries — right? — but is truly part the global effort to get us out of this pandemic nightmare, because at current rates of production, Moderna’s current rates of production, which they are keeping deliberately low, we’re going to be in this pandemic nightmare for many years to come. But they have the ability to partner with other manufacturers, to license their technology to other manufacturers, to work with the WHO in order to dramatically scale up production. And that’s really our only way out of this pandemic. The estimates by researchers is that we’re going to need somewhere around 20 billion doses of mRNA vaccines, because they are so much more efficacious than the other vaccines. We’re going to need 20 billion doses in order to get out this current state of affairs. And so, it’s incumbent on Moderna, and on Pfizer, to work with other manufacturers to scale up production, because current rates of production just aren’t going to get us there, and this lifesaving technology is going to be just the providence of rich people and rich countries.

AMY GOODMAN: So, after your essay was published in Stat News, which is a really important news site for all issues vaccine-related, Forbes ran a response piece headlined “Volunteer for Moderna’s Covid-19 Vaccine Trial Regrets His Participation. That’s a Problem.” It was written by John LaMattina, who is a former president of Pfizer Global Research and Development. I want to get your response to his argument that, quote, “Unfortunately, Dr. Menchik’s public repudiation of his participation in the Moderna Covid-19 vaccine clinical trial could serve to deter others from participation in future trials. Such behaviors could slow the development of the next generation of vaccines should a new viral outbreak occur. That would be a real tragedy — one that is avoidable.” Professor Menchik, respond.

JEREMY MENCHIK: Thank you. Thank you, Amy. To be honest, I am astounded by the reaction to my essay. It’s a pretty personal essay. I was a little bit uncomfortable, as an academic, to write something like that. But the response has been really kind of shocking. I heard from guinea pigs around the Boston area and around the country. And to then be — you know, to have my article written up and critiqued in Forbes, and, honestly, in kind of a misleading way, was pretty shocking.

And so, I read the response in Forbes. I read it pretty carefully. And the conclusion I came to is, what makes Pfizer uncomfortable, and I think what makes Moderna uncomfortable, is the idea that their data has a voice, that guinea pigs have a voice, and that we deserve to be represented. You know, I think Pfizer and Moderna would like to be accountable only to their shareholders, only to markets. But that they have to be accountable to their guinea pigs, and they have to advance policies for public health, not just private profit, I think that’s scary. I think that must be unnerving to them. And I think that’s why the piece was, I have to say, misrepresented in Forbes.

In response, we decided to scale up. You know? I think we found that mobilizing guinea pigs has tremendous potential for advancing positive social and political change. And that’s why we’re launching a website today, mrna4all.org, where other guinea pigs can learn about the really problematic public health policies of Moderna and get involved, because I think with mass mobilization and political participation, we can put pressure on Pfizer, we can put pressure on Moderna, in a way that they never expected. And I think we can do a lot of good.

AMY GOODMAN: Last Thursday, a group of institutional investors, representing $3.5 trillion in assets under management, sent a letter to the executives of pharmaceutical companies, like Moderna, calling on them to link their pay to making COVID-19 vaccines available around the globe. One of the backers, Frank Wagemans of Achmea Investment Management — I’m not sure if I’m pronouncing this right — told Reuters, quote, “It should make business sense for a vaccine manufacturer to aim to vaccinate the whole world.” Your response?

JEREMY MENCHIK: You know, we should have learned after 9/11 that political unrest, that the actions of the U.S. military or any military around the globe could come back and could have blowback here in the U.S. I’m not sure we learned the lesson after 9/11, but we’re learning it again now.

If there’s a new variant that pops up in Bangladesh or in Botswana, it’s going to affect me in Boston, right? And we have to treat this pandemic as a global public health emergency, and not just something where, as Americans who have access to the best vaccines in the world, we can be happy with that, while leaving — you know, I worked for many years in Indonesia. And my friends, my colleagues in Indonesia are still using the Sinovac vaccine, which, you know, you’re not going to hear it publicly, but is much less efficacious in preventing hospitalization and preventing death. And so, until my friends and colleagues in Indonesia have access to the mRNA vaccines, we’re going to continue to see variants pop up around the world. Whether it’s in Bali or Bangladesh, it’s going to affect me in Boston.

And so we have to treat this pandemic as a global crisis, as a global public health emergency. And that means that Moderna needs to think about not just selling vaccines to rich countries, and not just donating, you know, a few million vaccines, a few hundred million vaccines through the COVAX program, but seriously scaling up the technology so that the world can be vaccinated and boosted. And it’s going to take billions more doses for that to happen, but that’s what we all need. That’s our way out of this nightmare.

AMY GOODMAN: Jeremy Menchik, we want to thank you for being with us. We will link to your essay in Stat News, “Confessions of a 'human guinea pig': Why I’m resigning from Moderna vaccine trials.” Jeremy Menchik is associate professor at Boston University’s Pardee School of Global Studies. He has just launched a new campaign for other trial participants — as he calls them, “guinea pigs” — who want to get involved.

Next up, we speak to John Nichols. His new book, Coronavirus Criminals and Pandemic Profiteers: Accountability for Those Who Caused the Crisis. Stay with us. 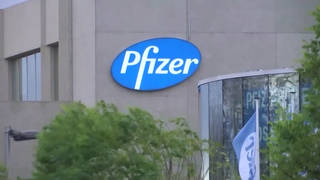