In a major development, a Guantánamo Bay detainee described his torture at CIA black sites for the first time in court last week, prompting military jurors to call his treatment a “stain on the moral fiber of America.” On Thursday, Majid Khan became the first Guantánamo prisoner to describe publicly the torture he experienced after being detained in Pakistan and then being held at CIA black sites, including forced feedings, waterboarding and other physical and sexual abuse. Khan was sentenced Friday to 26 years but under a previous deal is scheduled for release in February 2022. His unprecedented testimony only represents the “top part of the iceberg,” says Baher Azmy, legal director of the Center of Constitutional Rights, which has helped represent Majid Khan. “We need more meaningful accountability for what the United States government did to Majid and many dozens of other detainees in the so-called global war on terror.”

AMY GOODMAN: Today, we end, looking at the U.S. torture program. Seven senior military officers who served on a jury at a trial at Guantánamo have written an extraordinary letter decrying the CIA’s torture program, describing it as a “stain on the moral fiber of America.” The officers had served on the jury of the case of Majid Khan, a former resident of Maryland who was tortured in CIA black sites for years after being detained in Pakistan.

On Thursday, Khan became the first Guantánamo prisoner to describe in an open court the CIA’s torture methods at its black sites. For more than two hours, Majid Khan described forced feedings, waterboarding, other physical and sexual abuse he endured, including extended periods of nudity, while he was detained in the CIA’s network of overseas prisons from 2003 to '06. On Friday, Majid Khan, who's admitted to being a courier for al-Qaeda, was sentenced to 26 years, but under a deal he’s scheduled for release in February.

In the letter, the military jurors wrote, quote, “Mr. Khan was subjected to physical and psychological abuse well beyond approved enhanced interrogation techniques, instead being closer to torture performed by the most abusive regimes in modern history.”

We are joined now by Baher Azmy. He is legal director of the Center of Constitutional Rights, which helped represent Majid Khan.

Baher, thanks for coming back on Democracy Now! Can you talk about the significance of this testimony? Today’s New York Times front page”: “Military Jurors Rebuke Torture as Moral Stain.”

BAHER AZMY: Thank you, Amy, for making time to cover this remarkable story.

This is the first proceeding under the military commissions process where a survivor of the U.S. torture program actually got to testify under agreed-upon procedures. In the military commission system, it’s actually jurors that hear the sentencing. And they were selected, as any jurors would be, for impartiality and a lack of familiarity with the case.

And what they heard was a young man describe how, in his early twenties, he was impressionable and went awry. But Majid Khan, to his credit, detailed the systematic, brutal, sadistic torture of U.S. government officials, namely the CIA, which for nearly 20 years the U.S. government has tried to keep secret.

But to the credit of Majid Khan and his lawyers, they leveraged this proceeding to get some form of redress for his torture, namely a reduced sentence, because of the admission around his brutal torture, and open testimony, where he could speak to the public, to his family, who saw him for the first time, and to military officials, who were utterly repulsed by the conduct of the United States government.

AMY GOODMAN: So, tell us what happened to him, and the number of cases you represented around him.

BAHER AZMY: Well, he was one of a number of what the CIA called high-value detainees, who were, you know, spirited to one of numerous overseas secret detention sites, subject to CIA super intense interrogation, and tortured and tortured and tortured, even as he was sharing information and cooperating. They believed, in the perverse logic of this authoritarian regime, that was only proof that he had more information to give. And then he was ultimately transferred to Guantánamo in 2006, after the Supreme Court intimated that holding people in secret CIA detention would violate the Geneva Conventions. So, at that point, the Center for Constitutional Rights chose to represent him, among, you know, nearly two dozen other detainees in different parts of the U.S. detention program.

And he and his lawyers fought, consistently, to get some sort of recognition and documentation about his torture. And over and over again, a little bit more of the iceberg was revealed. And as much as he was able to share, it’s still just the top part of the iceberg. The Senate select intelligence report regarding torture hasn’t been fully declassified. We need to hear from other victims of the CIA torture program, and we need more meaningful accountability for what the United States government did to Majid and many dozens of other detainees in the so-called global war on terror.

BAHER AZMY: Yeah, that’s been documented. And there’s a level of sadism here that happened when the United States abandoned any commitment to legal constraint and turned over — I mean, I think what’s interesting here is that this is the U.S. military, jurors selected from the United States military, expressing revulsion for the conduct of civilian — civilians who ordered the torture, namely Rumsfeld, Cheney, Bush, John Yoo and other like repellent, so far unaccountable individuals from the Bush administration, judging them for violating basic legal and humanitarian norms.

AMY GOODMAN: It is expected Majid will be released in February. What? Thirty-eight men will remain at Guantánamo. What is the Biden administration doing? Are they going to close Guantánamo?

BAHER AZMY: I think they are supposedly working behind the scenes, but they need to do far more to ensure the safe release and transfer of all 38 detainees, including Majid Khan, and in his case, to be sent to a place where he’s free, will have emotional, psychological support and connection to his family.

AMY GOODMAN: Well, I want to thank you so much for being with us, Baher Azmy, legal director of the Center for Constitutional Rights.

That does it for our show. Democracy Now! is currently accepting application for a director of finance and administration, also a human resources manager. Check it out at democracynow.org.

And stay with us throughout these two weeks. Democracy Now! is your place for the U.N. climate summit and everywhere around the world. I’m Amy Goodman. 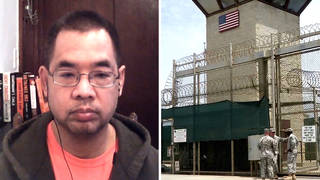