We feature an excerpt from our recent interview with world-renowned scholar and political dissident Noam Chomsky about how the Biden administration is continuing a reckless foreign policy, despite taking a softer tone than the Trump administration. “The trajectory is not optimistic,” Chomsky says. “The worst case is the increasing provocative actions towards China. That’s very dangerous.” Chomsky will join us on our 25th anniversary online celebration on the evening of December 7.

AMY GOODMAN: This is Democracy Now!, democracynow.org. We end today’s show with the world-renowned dissident and linguist Noam Chomsky. Nermeen Shaikh and I had a chance to speak with Noam on Monday and asked him about his assessment of President Biden’s foreign policy.

NOAM CHOMSKY: Well, the trajectory is not optimistic. Biden has pretty much picked up Trump’s foreign policy. He has eliminated some of the more gratuitously savage elements. Like in the case of Palestine, for example, Trump was not satisfied with just giving everything away to Israeli right-wing power — “do what you want” — and offering nothing to the Palestinians, just kicking them in the face; he even had to go beyond that to truly gratuitous savagery, like cutting off the lifeline, the UNRWA lifeline, for Palestinians to be able to have at least minimal bare survival in the Gaza — in the Israeli punching bag in Gaza. Even that, well, Biden removed those things. Other than that, pretty much followed the same policies.

On Iran, he made some verbal moves towards overcoming the crime of U.S. withdrawal from the joint agreement, but he’s insisting on perpetuating Trump’s position that it’s the responsibility of Iran, the victim, to move towards harsher agreement because the United States pulled out of an agreement that was working perfectly well.

What exactly is the China threat? Actually, that question is rarely raised here. It is discussed in Australia, the country that’s right in the claws of the dragon. So, recently, the distinguished statesman, former Prime Minister Paul Keating, did have an essay in the Australian press about the China threat. He finally concluded, realistically, that the China threat is China’s existence. The U.S. will not tolerate the existence of a state that cannot be intimidated the way Europe can be, that does not follow U.S. orders the way Europe does, but pursues its own course. That’s the threat.

When we talk about the threat of China, we’re talking about alleged threats at China’s borders. China does plenty of wrong things, terrible things. You can make many criticisms. But are they a threat? Is the U.S. support for Israel’s terrorist war against 2 million people in Gaza, where children are being poisoned because — a million children are facing poisoning because there’s no drinkable water, is that a threat to China? It’s a horrible crime, but it’s not a threat to China. While serious abuses that China is carrying out are wrong, you can condemn them, they’re not a threat.

Right at the same time as Keating’s article, Australia’s leading military correspondent, Brian Toohey, highly knowledgeable, did an assessment of the relative military power of China, and in their own region of China, and the United States and its allies, Japan and Australia. It’s laughable. One U.S. submarine, Trident submarine, now being replaced by even more lethal ones — one U.S. submarine can destroy almost 200 cities anywhere in the world with its nuclear weapons. China in the South China Sea has four old, noisy submarines, which can’t even get out because they’re contained by superior U.S. and allied force.

And in the face of this, the United States is sending a fleet of nuclear submarines to Australia. That’s the AUKUS deal — Australia, U.K., United States — which have no strategic purpose whatsoever. They will not even be in operation for 15 years. But they do incite China almost certainly to build up its lagging military forces, increasing the level of confrontation. There are problems in the South China Sea. They can be met with diplomacy and negotiations, the regional powers taking the lead — could go into the details.

But the right measure is not increasing provocation, increasing the threat of an accidental development, which could lead to devastating, even virtually terminal nuclear war. But that’s the direction the Biden administration is following: expansion of the Trump programs. That’s the core of their foreign policy programs.

The warmest of congratulations to Charina Nadura and Hector Ríos on the birth of Amihan Ríos Nadura. Amihan, welcome to the world. I’m Amy Goodman. Thanks for joining us. 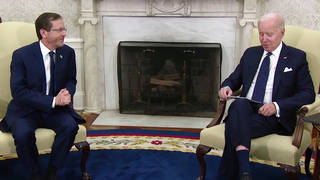