We speak to Alexis McGill Johnson, president and CEO of the Planned Parenthood Federation of America, about the Supreme Court hearing Wednesday, in which the conservative majority on the court seemed to indicate that they support upholding the restrictive Mississippi law that bans abortion starting at just 15 weeks of pregnancy, and could potentially overturn Roe v. Wade. Justice Amy Coney Barrett suggested during questioning that giving up children for adoption would resolve the pro-choice argument that anti-abortion laws force women into motherhood. “Our very right to determine when and if we become pregnant, our self-determination, is predicated on our ability to be seen as free and equal citizens in this country,” says Johnson. She says if the ban is upheld, the people most impacted will be “low-income, Black, Brown and Indigenous communities, people who are trans and nonbinary, people who might not have support at home.”

AMY GOODMAN: This is Democracy Now! I’m Amy Goodman, with Nermeen Shaikh, as we look at how the Supreme Court appears set to uphold Mississippi’s 15-week abortion ban in a move that could either radically reduce abortion access in much of the country or overturn Roe v. Wade entirely, bringing in to this discussion Alexis McGill Johnson, president and CEO of the Planned Parenthood Federation of America and the Planned Parenthood Action Fund.

Thank you for coming back on Democracy Now!, Alexis. When Amy Coney Barrett talked about women should not be forced to be mothers — after all, they could give up the children after the infant was born — can you comment on this new Handmaid’s Tale version of America?

ALEXIS McGILL JOHNSON: Amy, first, it’s good to be with you today. You know, listening to Justice Amy Coney Barrett talk about adoption or safe haven as the solution to abortion, as opposed to just a different outcome of pregnancy, really, I thought, just was undermining — it was offensive — the very equality and liberty that Julie Rikelman was so forcefully arguing in the court today, that our very right to determine when and if we become pregnant, our self-determination, is predicated on our ability to be seen as free and equal citizens in this country. And I just thought that the road that Justice Barrett went down was quite alarming and really quite shocking.

NERMEEN SHAIKH: Alexis, could you explain who you think would be most impacted? Who are the women, the demographics of the women, who most commonly receive abortions in the U.S.? Professor Watson mentioned that 75% of them are low-income.

ALEXIS McGILL JOHNSON: Yes, absolutely. Look, I mean, we’re seeing this actually play out right now in Texas, the impact that we are seeing on our patients, on patients of independent providers, who have to flee the state in order to gain access to this constitutional right. They are going to be more likely to be low-income, Black, Brown, Indigenous communities, people who are trans and nonbinary, people who may not have support at home. And the impact of what we are saying — right? — that if the court is so willing not only to ban abortions at 15 weeks but also, as they seem poised to do, consider overturning 50 years of precedent, we could see 26 states move in this same vein. And that would affect 36 million people. So we are talking about people who have the least ability, to be forced into pregnancy, to be forced into poverty. And the impact and the significant burden that it would put on them to seek services outside of their state is alarming.

NERMEEN SHAIKH: And, Alexis, could you explain how many — because what’s at issue here is 15 weeks — how many abortions, what percentage, do you know, occur after 15 weeks?

ALEXIS McGILL JOHNSON: Look, the great majority of abortions do happen under 20 weeks. And the great majority of abortions also happen to people who are already parents, who understand what becoming a parent to an additional child means for their lives and for their families. And so, you know, I think what was happening in the court yesterday, particularly by the Mississippi solicitor general, was Mississippi was asking for a world where states get to determine who is free and who is not. You know, this whole argument around a state, particularly like Mississippi, one that has the highest maternal mortality rate, the highest infant mortality rate, and is the lowest among child well-being, those are the folks that are going to be the most impacted by these kinds of decisions. And the majority of them, as I said, don’t happen after the 15-week ban.

AMY GOODMAN: So, Alexis McGill Johnson, as we wrap up, let’s look into the future here. We don’t exactly need a crystal ball. But if, essentially, Roe v. Wade were so undermined or overturned by the Supreme Court, how these trigger laws, in about half states, will impact abortion availability in the country? Planned Parenthood has hundreds of clinics around the country.

ALEXIS McGILL JOHNSON: Yes, Planned Parenthood has hundreds of clinics. There are also a number of independent providers that are in the South and the Midwest where these bans, trigger bans, and laws will take effect. You know, as I said, it will — we’ve seen playing out in Texas right now. We’re seeing people in Texas having to travel thousands of miles to New Mexico, to California, to Oregon, to New York, to Vermont, just to get access to determine their own future. And so we are putting a tremendous burden on people to move out of state and gain access to abortion. And again, it is going to impact the people who can least afford the ability to move out of state, as well.

Next up, we go to France, where the American-born pioneering performer and civil rights icon Josephine Baker has been inducted into the Panthéon at the same time racism is on the rise in France and the far-right xenophobic writer Éric Zemmour, who many describe as a fascist, has launched a run for the presidency. Stay with us. 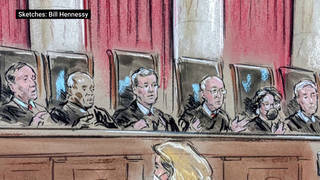