Jeff Bezos to Quit as CEO, But Amazon’s “Predatory Business Model” Will Continue Unless Lawmakers Act

Amazon founder Jeff Bezos has announced he will step down as CEO and move into a new role as executive chairman later this year, giving up the reins after nearly three decades during which he grew Amazon from an online book retailer into a sprawling business empire and became one of the world’s richest people in the process. Andy Jassy, the head of the company’s cloud computing division, is set to take over the top job, but Bezos will continue to be the largest Amazon shareholder and remain on the board of directors. The news comes as calls continue to mount for lawmakers to break up Amazon and other tech giants. “There’s no reason to think anything is going to change at Amazon because Bezos has taken this new role,” says Robert Weissman, president of the consumer advocacy group Public Citizen. “Neither the economy nor our democracy can really function properly with fairness if Amazon is able to maintain its massive concentration of wealth and power.”

Jeff Bezos has announced he’s stepping down as CEO of Amazon, the $1.7 trillion company he founded in '94. Bezos will remain as executive chair and the company's biggest shareholder. He’s now worth about, oh, $185 billion, after personally making over $70 billion since the start of the pandemic. Jeff Bezos will be succeeded in July by Andy Jassy, who runs Amazon’s cloud computing division, its most lucrative division. Amazon announced the news as it reported record profits.

On Tuesday, the company also reached a $61.7 million settlement with the Federal Trade Commission over charges it stole tips from its Amazon Flex drivers over two-and-a-half years. Amazon used the tips earned by the Flex drivers to pay the wages of these hourly workers, who don’t receive any benefits and make deliveries in their own vehicles.

This all comes as 5,000 Amazon workers in Alabama begin voting next week to decide whether to become the first unionized Amazon warehouse in the country.

We go now to Washington, D.C., where we’re joined by Rob Weissman, president of Public Citizen, which is calling for Amazon to be broken up.

Well, your response to the news, Robert Weissman, of, yes, Jeff Bezos is stepping down as CEO, but he clearly will still be extremely active, maybe even more active, at least in a public way, with Amazon?

ROBERT WEISSMAN: Right. There’s no reason to think anything is going to change at Amazon because Bezos has taken this new role. Although, of course, it’s a chance for the company to rethink its predatory business model, I don’t think there’s any reason to expect that to happen.

So, what does need to happen is for the government to step in and take much more serious action than it’s ever really contemplated to restrain, control and ultimately break up Amazon. It has too much concentrated power as a predatory business model. And neither the economy nor our democracy can really function properly, with fairness, if Amazon is able to maintain its massive concentration of wealth and power.

AMY GOODMAN: So, it’s interesting he’s stepping down at a time when, under this new administration, Big Tech is under scrutiny. What that means, we’ll see. But what would it mean to break up Amazon? How would that happen?

ROBERT WEISSMAN: Well, one thing that Amazon has done throughout its quarter-century of existence is leverage its — is engage in predatory pricing and leverage its power from one business line to grow in another or exact profits from another. So, the company now, for example, actually makes more profits from its web services than it does from the consumer-facing company that so many of us are familiar with.

Those two companies don’t need to be joined together. They could be separated. And that would prevent the possibility — many think the ongoing practice — of Amazon effectively using information it gets from its web services to figure out how it can market and profiteer on the consumer side.

We also would want to see Whole Foods, which it recently acquired, spun off, so that the company doesn’t have an entry point by way of acquisition into then dominating the grocery business both for in-person and deliveries.

ROBERT WEISSMAN: You know, this came down yesterday, just a couple hours before Bezos made the announcement. And it is just shocking. It’s not entirely shocking, in the sense that companies engage in wage theft across the country all the time, so it’s become routinized and normalized to some extent. But coming from Amazon, the idea that they are pocketing money that consumers give as tips to their drivers, and not conveying those tips to the drivers, actually just saying, “Hey, we’re going to use it to cover the cost of your wages, when, in fact, we, Amazon, advertise to you, our contract drivers, that you could keep these tips,” just astounding.

You just have to ask: Why? How much? When is enough? What is the level of greed that you need? How much money does Jeff Bezos need? As it happens, this amount that’s going to be returned to the drivers is about $60 million, that Amazon allegedly improperly, unfairly siphoned off from tips to the drivers. Well, Jeff Bezos made a thousand times more than that since the pandemic in increased stock value. A thousand times more. Why would you nickel and dime these employees? It is a company that has predation built into its business model. And that’s one — yet another reason it really has to be fundamentally restructured and reoriented.

ROBERT WEISSMAN: Well, who knows? He’s also going to spend more time on his charitable enterprises, supposedly. I mean, you know, as a Washington resident, you have to say, The Washington Post has become a better paper since Bezos bought it, and he hasn’t really, by any way we can see from the outside, interfered with it. More engagement from him may not be a good thing.

But, you know, I think one thing that we’re seeing is, like, well, maybe he should spend more time with his charity. All the other superbillionaires do that, which is fine maybe. But the problem is, no one should have $200 billion personally in the first place to give away, especially when they made that gigantic amount of money by extracting it from their workers and undermining small businesses across the country.

AMY GOODMAN: And explain that, small businesses, both completely dependent on Amazon but also exploited by Amazon, and what should be done.

ROBERT WEISSMAN: Yeah. I mean, what we’ve seen, in sector after sector, is that small businesses are finding they can’t — either they can’t survive in brick-and-mortar, traditional stores, or they can only survive doing that if they’re also online. So they’re moving their businesses increasingly online. But you really can’t do a business online on your own. If you just rely on search, people to search your business out and buy from you, you’re not going to make it. So then you have to move yourself to the so-called Amazon marketplace. You’ve got to sell your products over Amazon. But once you do that, you get caught up into the rules of the game that Amazon establishes.

And there is lots of evidence, including in a really detailed report from the House subcommittee on antitrust last year, that shows Amazon takes a lot of money from those small businesses, but they don’t have any choice except to pay it. And then, if those small businesses get too successful, Amazon, because of all their data tracking, knows about it and begins a competing business on its own. So, the small businesses feel like “heads, Amazon wins; tail, they lose.” They can’t make it. But they have no choice but to try their best to work through and on Amazon.

AMY GOODMAN: Rob Weissman, I want to thank you for being with us, president of Public Citizen. 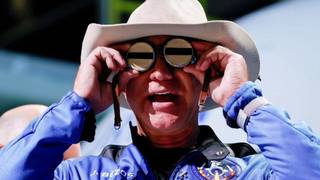