We speak with a Burmese dissident about the military coup underway in Burma as de facto leader Aung San Suu Kyi has been arrested. The coup unfolded hours before lawmakers were to take their seats in the opening of parliament, following a November election in which Aung San Suu Kyi’s party won over 80% of the contested seats in the Burmese parliament and the military made unsubstantiated claims of fraud. Hundreds of lawmakers, activists and human rights defenders have also been detained since the coup, and telecommunications have been cut in parts of Burma, which the military calls Myanmar. “The military decided that they could no longer play this democracy game with Aung San Suu Kyi,” says Maung Zarni, co-founder of the Free Rohingya Coalition and the Forces of Renewal for Southeast Asia. “The military is completely outfoxed legally, as well as at the polls. That’s why the military decided to wreck the game.” He says the coup could also worsen the outlook for members of the Rohingya Muslim community, who have faced mass detention, killings and expulsion from Burma in a campaign widely recognized as genocide.

On Tuesday night, opponents of the coup protested by banging pots and pans outside their windows in Yangon.

On Tuesday, the Biden administration formally declared the military’s action to be a coup, prompting a review of U.S. foreign assistance to Burma.

Monday’s coup unfolded hours before lawmakers were to take their seats in the opening of parliament, following a November election in which the military made unsubstantiated claims of fraud. In the election, Aung San Suu Kyi’s party won over 80% of the contested seats in the Burmese parliament.

Aung San Suu Kyi spent years fighting against the Burmese military, winning the Nobel Peace Prize in 1991 for her efforts. She spent 15 years under house arrest before becoming Burma’s de facto civilian leader in 2016. But in recent years, she’s been condemned for presiding over a campaign of violence by Burma’s military against the minority Rohingya Muslim community, which saw over 1 million Rohingya flee to neighboring Bangladesh. Many displaced Rohingya fear the coup will make it impossible for them to return home. This is Mohammed Salam speaking from the refugee camp in Cox’s Bazar.

MOHAMMED SALAM: [translated] Now in Myanmar the military have declared a one-year state of emergency. That announcement is not good for the Rohingya people, too, because the military, together with the Rakhine people, tortured us a lot and carried out genocide. Then they made us homeless. We are now away from our home, in Bangladesh, living under tents. Where is our children’s education? There is nothing here for us. Now their military governs again. There are no benefits for us. They have arrested the democratic leader with military force. The fact they arrested such a leader will not be good for the Rohingya people there.

AMY GOODMAN: To talk more about the coup in Burma, we’re joined by Maung Zarni, a Burmese scholar, dissident and human rights activist living in exile in Britain. He’s co-founder of the Free Rohingya Coalition, as well as the Forces of Renewal for Southeast Asia, or FORSEA, a grassroots network of pro-democracy scholars and human rights activists across Southeast Asia.

Maung Zarni, thanks so much for being with us. Start off by talking about what happened this week. Talk about what unfolded in Burma, the country that the military calls Myanmar.

And what is interesting is what — you know, there are personal factors that trigger this coup on Monday. The commander-in-chief, Min Aung Hlaing, has a price tag on his head, because he is named one of the — basically, number one criminal against humanity with respect to Rohingya genocide. And so, that’s one reason.

And the other one is, of course, you know, they saw what happened on January 6, the storming of the U.S. Capitol, and they saw what is going on in China, Russia. The ideological climate moving toward the far right around the world emboldened the generals that this is the time to end this democracy game with Aung San Suu Kyi.

AMY GOODMAN: So, can you talk about the U.S. response? You have President Biden issuing a statement where he refers to Burma, not Myanmar, as President Obama also did, referred to Burma, and the issue of whether to call it a coup d’état. On Monday, Biden said the U.S. is, quote, “taking note of those who stand with the people of Burma in this difficult hour,” and urged the international community to pressure the Burmese military to relinquish power, lift restrictions on communications and free all officials and activists who have been detained. He also suggested the U.S. may again impose sanctions on Burma. And, of course, if they call it a coup d’état, it would require that they cut off aid to Burma.

MAUNG ZARNI: Yes. I think the call — designating the coup as coup, as it should be, obviously, automatically trigger immediate freezing of aid. But it’s not a lot, I think like over $100 U.S. million in development or civil society aid or humanitarian aid to Burma.

But I think we should also not forget the fact that the United States has in some ways contributed to this situation. You know, in 2010, when the Burmese military decided to play ball with the Western democracies, they brought in this, essentially, very limited form of democracy, where the military generals play regents to the civilian democrats. And so, the last 10 years, we have lived with this — basically, the big lie that we are democratizing and that this is a fragile transition with Suu Kyi at its helm. Well, on Monday, the military itself killed and buried that lie.

AMY GOODMAN: So, talk about Aung San Suu Kyi’s role. She’s been arrested. The president has been arrested. Now, today, the latest news is they’re being charged — I think she for having, they said, illegal radios, you know, gotten from abroad, finding that in her home. But the role that she has played? I mean, she was considered a freedom fighter for so long, won the Nobel Peace Prize, under house arrest for so many years by the military, its chief critic. Then she became its chief spokesperson and justified what happened to the Rohingya Muslims that were forced, ultimately — about a million of them — into neighboring Bangladesh. Now they have turned on her, the woman who has defended them for all these past few years?

MAUNG ZARNI: Well, you know, Amy, as you know, I was a foot soldier supporting her and campaigning for her release and then the divestment and boycott campaign in the U.S. for the longest time. And I saw her, actually, at the International Court of Justice, in a different room, when she was actually defending the military and denying the charges of genocide. And so, it’s really painful as a dissident to see, you know, really, the metamorphosis of Aung San Suu Kyi from this human rights defender, a democrat dissident, to becoming the military’s defender, the spokesperson.

Two things happened. One was she miscalculated that if she kept on placating the military, which her father founded some 75 years ago, calling the military generals her brothers, because she considered them her father’s sons, she thought that the military would cooperate with her to truly democratize the country and then return to the barracks. Well, that proved to be wrong. I have always said that this will not work. I came from an extended military family. The military has no interest in democratizing the country and no commitment to democratic values whatsoever.

The second reason is, she herself is an anti-Muslim racist. She shares the view that Rohingya Muslims do not belong in Burma. That’s a view the Army has institutionalized and the public has embraced. So, because of the —

AMY GOODMAN: Zarni, I wanted to go to Aung San Suu Kyi in her own words.

AMY GOODMAN: This was back at The Hague in 2019, defending the Burmese military’s treatment of the Rohingya.

AUNG SAN SUU KYI: Regrettably, the Gambia has placed before the court an incomplete and misleading factual picture of the situation in Rakhine State in Myanmar. Yet, it is of the utmost importance that the court assess the situation obtaining on the ground in Rakhine dispassionately and accurately.

AMY GOODMAN: The significance of this case in The Hague, Zarni, and then what will happen to the Rohingya now with the military seizing power?

MAUNG ZARNI: Well, I think the military has institutionalized the genocidal persecution of Rohingyas since 1970s. And, you know, there are far more Rohingyas dispersed across the world than Rohingyas in the country. There are about half a million Rohingyas in open-air prison camps in western Myanmar, about 120,000 in what the German officials call concentration camps. The rest are in these forest villages from where they cannot leave. There is 1 million Rohingyas in Bangladesh waiting to be repatriated.

AMY GOODMAN: Well, I want to thank you, Maung Zarni, for joining us, Burmese scholar, dissident, human rights activist — we’ll continue to follow what unfolds — co-founder of the Free Rohingya Coalition, as well as the Forces of Renewal for Southeast Asia, known as FORSEA, this grassroots network of pro-democracy scholars and human rights activists across Southeast Asia.

When we come back, President Biden has halted deportations, he said, of immigrants, and yet hundreds and hundreds of immigrants have been deported in the last days under the new administration. Stay with us.

AMY GOODMAN: Rohingya musician Mohammed Alom, recorded in 2018 in Bangladesh as part of the Music in Exile project. 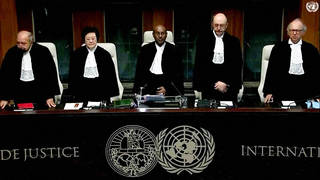