As thousands of asylum seekers continue to wait in Mexico for a chance to enter the United States, investigative journalist Jean Guerrero says Mexican social media influencers connected to right-wing U.S. media outlets and political figures are whipping up “hysteria” about the southern border. She says they are spreading false conspiracy theories about an orchestrated “invasion” and “child trafficking” funded by Democrats that are endangering vulnerable people. “It’s been incredibly damaging,” says Guerrero.

We look now at how two Mexican social media influencers, who are devoted Trump supporters, have been spreading false conspiracy theories about the ongoing crisis at the U.S.-Mexico border, warning their viewers in the United States of an orchestrated “invasion” and “child trafficking” funded by Democrats. Sound QAnony?

Well, an explosive new report published Monday in The Daily Beast by reporter Jean Guerrero reveals one of the men was deported after serving time in prison for a federal drug-trafficking conviction but was able to reenter the U.S. while Trump was president. He’s a live-streamer named Oscar Ramirez, or “Oscar El Blue,” who calls himself an independent reporter and was featured on Trump’s former chief strategist Steve Bannon’s podcast War Room several times this month. Ramirez also contributes to a U.S. right-wing media network called Real America’s Voice. This is a clip from one of his reports.

OSCAR RAMIREZ: All the way over here, they put a wall to protect the United States and to protect this invasion that is happening. So, it is — it was amazing.

AMY GOODMAN: So, that’s Oscar Ramirez, or “Oscar El Blue.” Just this past April, Ramirez reportedly reentered the U.S. at the El Paso, Texas, border crossing, along with Anthony Agüero, another right-wing influencer, who allegedly took part in the January 6th insurrection and is a close friend of the QAnon conspiracy theorist congressperson, Marjorie Taylor Greene.

Well, if you’re having a little trouble following this, let’s go to Jean Guerrero, investigative journalist and author of Hatemonger: Stephen Miller, Donald Trump, and the White Nationalist Agenda. She has this new piece in The Daily Beast headlined “The MAGA Clowns Making Chaos at the Border Have Ugly Pasts.”

Jean, welcome back to Democracy Now! Just lay out what you have found. This is explosive.

JEAN GUERRERO: Yes, I mean, I looked at the cases of two of these right-wing influencers and conspiracy theorists, but Oscar Ramirez’s is definitely the most shocking case. He is someone, as you said, Amy, with a federal drug-trafficking conviction in his past, which, according to the Immigration and Nationality Act, U.S. federal law on immigration, someone with that kind of conviction would be inadmissible to the United States after deportation, unless he were able to obtain a special visa waiver from the attorney general himself or the State Department. And so, it would be impossible for him to reenter the United States without basically very strong political connections or working as an informant. I asked Mr. Ramirez what the details of his visa were. He refused to give them. He accused me and The Daily Beast of promoting child trafficking by trying to expose some of the things that he’s involved in.

But in addition to the tens of thousands of U.S.-based followers that he has and who he’s spreading lies to, you know, creating hysteria about alleged trafficking at the border, when he himself has a federal drug-trafficking conviction, it’s been incredibly damaging. And in addition to that social media following, he’s been appearing regularly on a U.S. right-wing media outlet called Real America’s Voice, which airs Steve Bannon’s program The War Room, among other things. And I reached out to them about their decision to use a convicted drug trafficker as a talking head on border security and to create hysteria about trafficking at the border, and they declined to respond. But they are creating —

JUAN GONZÁLEZ: And, Jean, could you — Jean, could you talk also about Anthony Agüero and his ties to right-wing elements in the United States, as well as another person, Paloma Zuniga?

JEAN GUERRERO: Yes. So, Oscar Ramirez, he is close friends and collaborators with Anthony Agüero, as well as Ben Bergquam, who is a correspondent at Real America’s Voice. These three men are very close. And both of the U.S.-based men, Ben Bergquam and Anthony Agüero, are close, longtime associates and friends of Marjorie Taylor Greene. They’ve defended the integrity of the Proud Boys, which is designated a hate group by the Southern Poverty Law Center. They’ve been involved in a number of right-wing extremist activities in the United States. And there’s some speculation that because of Oscar Ramirez’s close connections with these individuals, he was able to get connections in the Trump administration. And despite the fact that the Trump administration was not — was instructing agents not to use their discretion in favor of extending leniency to any immigrant whatsoever, let alone those with criminal convictions, he was able to get a special — this special pass to get back into the United States and to report alongside these two individuals for this U.S. right-wing network called Real America’s Voice.

“Paloma for Trump” is a U.S. and Mexican national who’s also extremely problematic. She has tens of thousands of followers, as well, also associated with Ben Bergquam, the Marjorie Taylor Greene associate. And she has been involved in numerous physical confrontations with migrants. At one point she was caught on camera chasing and, literally, physically shoving a migrant child who was approaching the border with his father to request asylum. She was screaming in his face, chasing him around and shoving him and telling him that he was not welcome in the United States. She has since apologized for that incident, but she remains a problematic character. She’s been involved in an incident in which rocks and racial epithets were thrown, were hurled at the asylum seekers.

She very recently went to this migrant camp of thousands of people who are waiting for their turn to request asylum legally in the U.S., and started broadcasting their images, including images of children, without their permission, something which makes the asylum seekers very nervous because of their precarious situation in northern Mexico, where many of these people are fleeing death threats. There’s gang violence that they have to worry about. They don’t want their images broadcast. And these live-streamers have been going down there, not respecting their rights to privacy. Often they’ll interview them under false premises and then mistranslate to their U.S.-based audiences to create more hysteria and to basically conflate all of these asylum seekers with child traffickers and conflate their advocates with traffickers, as well.

JUAN GONZÁLEZ: And also, in terms of — some of them, as you report, engage in Mexican chauvinism toward Central American refugees?

JEAN GUERRERO: Yes, exactly. So, Oscar Ramirez, he claims that he’s only against illegal immigration. But when you look at his videos, I mean, he tells his viewers that Central Americans are, quote-unquote, “lazy” and that anyone who is trying to come to the United States through Mexico from Central America is just looking for, quote, “easy money,” “easy welfare.” He peddles these very racist and negative stereotypes about Central Americans.

And this is something that’s very common. It’s an established problem, this internalized racism that can occur in the Latinx community, although Ramirez and Zuniga deny being racist. But they both have expressed very negative views toward Central Americans, towards people who are coming from other countries who may have darker skin than Mexicans.

And it’s a very common strategy with people who are peddling white supremacist ideas to use people of color as shields against accusations of racism. So, having people like Paloma Zuniga or Oscar Ramirez on these U.S. right-wing media outlets talking about a, quote-unquote, “invasion of horrible people at the border,” you know, it helps blunt accusations of racism in these U.S. right-wing media outlets and just really creates a lot of hysteria and hurts the chances of these asylum seekers to ever find a legal pathway into the United States.

I spoke to many of them, who say that they’re afraid of these live-streamers. The live-streamers make them really sad and concerned that they might — that it might turn public opinion in the United States against immigration and create this hysteria that will ultimately lead them to not be able to find refuge in this country, where they’re hoping to save their children’s lives.

AMY GOODMAN: Jean Guerrero, we want to thank you so much for being with us, wrote The Daily Beast piece, which we will link to, “The MAGA Clowns Making Chaos at the Border Have Ugly Pasts.” Jean is also author of Hatemonger: Stephen Miller, Donald Trump, and the White Nationalist Agenda.

When we come back, we go to Bessemer, Alabama, where Amazon workers are voting on whether to become the first unionized Amazon warehouse in the United States. Stay with us. 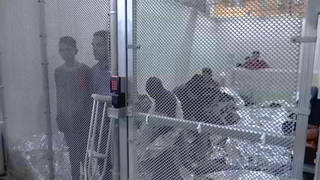