The murder trial of Derek Chauvin, the former Minneapolis police officer charged with second-degree murder and manslaughter for killing George Floyd, is proceeding to jury selection despite an order from an appeals court judge that a third-degree murder charge be considered, as well. We speak with Nekima Levy Armstrong, a civil rights attorney and racial justice activist, who says that if the trial proceeds, who serves on the jury could prove crucial in the case. “A big part of the concern is whether or not there will be any real diversity on the jury,” says Levy Armstrong. “The jury questionnaire had questions such as how the potential jurors may feel about Black Lives Matter, the defund the police movement, the Blue Lives Matter movement. All of those things are going to play a role in who is ultimately selected for the jury.”

AMY GOODMAN: Black Lives Matter protesters marched in Minneapolis and other cities Monday to mark what was supposed to be the start of the murder trial of Derek Chauvin. The former Minneapolis police officer is charged with second-degree murder and manslaughter for killing George Floyd by kneeling on his neck for more than nine minutes. The killing of Floyd on May 25th, 2020, sparking protests around the world. Jury selection was scheduled to begin Monday but was delayed after an appeals court ordered the trial judge to consider reinstating a third-degree murder charge against the white police officer. Meanwhile, Chauvin is also facing possible additional federal charges. The New York Times recently revealed a federal grand jury in Minneapolis has been hearing from witnesses. Relatives of George Floyd, including his sister Bridgett, spoke outside the Minneapolis courthouse Monday.

AMY GOODMAN: Over the weekend, George Floyd’s brother Philonise Floyd spoke at a news conference ahead of the trial in Houston.

PHILONISE FLOYD: My brother said “I can’t breathe” multiple times, but the officer sat on his neck with a smirk on his face. My brother screamed, “Tell my kids I love them!” as his soul left his body. … He told me, time and time, “My name will ring bells all around the world.” I never thought it would be just like this. I thought he will be somebody on a TV show or in a basketball game. I had no idea that I would have to watch my brother being buried in front of millions of people. It was devastating.

AMY GOODMAN: Joining us from Minneapolis is Nekima Levy Armstrong, civil rights attorney, activist, founder of the Racial Justice Network, executive director of the Wayfinder Foundation, former president of the Minneapolis chapter of the NAACP.

Nekima, welcome back to Democracy Now! I know you’ve been in the streets, and you’re an attorney. Could you start off by talking about why the trial was delayed?

NEKIMA LEVY ARMSTRONG: The trial was delayed because the Attorney General’s Office sought to reinstate the third-degree murder charge against Derek Chauvin. And the defense attorneys filed an appeal to the court of appeals decision that said that prosecutors could in fact add that charge back in the complaint against Derek Chauvin. Defense attorneys are pushing for that change to occur in the opposite direction. And so now the judge is waiting to hear what the appeals court is going to say.

JUAN GONZÁLEZ: And could you talk about, Nekima, about the jury selection process, concerns that may exist in the community about the previous make-up of juries in Hennepin County?

NEKIMA LEVY ARMSTRONG: Yes. A big part of the concern is whether or not there will be any real diversity on the jury. Of course, we have complicating factors such as COVID-19, in terms of the impacts upon the Black community and other communities of color, which may make it difficult for people to feel comfortable serving on a jury, especially for as long as the trial might be. Beyond that, the socioeconomic impacts of COVID-19 have significantly impacted the Black community. Additionally, the jury questionnaire had questions such as how the potential jurors may feel about Black Lives Matter, the defund the police movement, the Blue Lives Matter movement. All of those things are going to play a role in terms of who is ultimately selected for the jury.

JUAN GONZÁLEZ: And do you have any concerns about the possibility of the defense attorneys seeking to move the case somewhere else in Minnesota?

NEKIMA LEVY ARMSTRONG: I absolutely have concerns about that. I grew up in Los Angeles in the era of the Rodney King beating, and I recall the impacts of the case being moved out of L.A. County to Simi Valley, which was the home of a lot of retired police officers, as well as mostly middle-income white people. And, of course, they acquitted those officers who beat Rodney King.

So, our concern is that something similar will happen in this case if the venue is moved. Hennepin County is one of the most diverse counties in the state of Minnesota. Minnesota is 84% white. And so, if they move the case outside of Hennepin County, it is even less likely that there will be a diverse jury. And it is also less likely that there will be people who are empathetic to what George Floyd experienced at the hands of Derek Chauvin and the other three officers who killed him.

AMY GOODMAN: Nekima Levy Armstrong, I wanted to get back to that issue of why they’re trying to add a lesser charge to the second-degree murder, the significance of this third-degree murder charge. You have the conviction of a previous Minneapolis police officer, Mohamed Noor, marking the first guilty verdict for a fatal shooting by an on-duty cop in Minnesota in decades in 2019. Can you talk about how that affects this trial and what could be the strategy of the prosecutors right now?

However, in the case of Mohamed Noor, the former Minneapolis police officer who killed Justine Ruszczyk Damond, he was charged with third-degree murder. He was convicted. He is serving over 12 years in prison. And a big part of that case had to do with the fact that Mohamed Noor reached over his partner, shot out the window and shot Justine Ruszczyk Damond without even assessing the scene and, you know, figuring out was it a child, was it a woman, was it a threat. He just fired, and she was killed. And so, the court, thus far, has upheld that third-degree murder conviction against Mohamed Noor.

AMY GOODMAN: Let me ask you something that we hadn’t really reported on before, The New York Times reporting recently that Derek Chauvin agreed to plead guilty last spring to third-degree murder and serve 10 years in prison, but Attorney General William Barr rejected the plea deal.

NEKIMA LEVY ARMSTRONG: Yes. And for those of us who live in Minnesota, we were not aware that a plea deal was even offered to Derek Chauvin until that New York Times report happened. Apparently, the Hennepin County Attorney Mike Freeman made that deal with Derek Chauvin to try to quiet things down in the Twin Cities and get the case over with. But, of course, we’ve had many concerns with Mike Freeman’s decision-making and the fact that he has routinely let killer cops off the hook in Hennepin County.

JUAN GONZÁLEZ: And could you talk about the city’s preparation for the trial, the fortification of downtown Minneapolis, and how the community is responding to efforts to limit protests and demonstrations during the trial?

NEKIMA LEVY ARMSTRONG: Yes. We have had concerns about the city, the county, our governor, as well as our Department of Public Safety, with regard to their excessive focus on security measures outside of the Hennepin County Government Center. They have placed chain-link fencing, barricades and barbed wire all around the Government Center, and there is only a small area in which protesters are actually able to gather. Of course, this raises a number of concerns about our local government, our state government infringing upon our First Amendment rights to freedom of speech and peaceable assembly. We have publicly laid out those concerns. Yet, in the midst of the excessive focus on security, we have still continued to protest. We took to the streets on Sunday. We took to the streets yesterday. I anticipate many more additional protests. One other aspect of security has to do with a joint task force, a joint coalition of many police departments that are coming together, and the head of public safety, John Harrington, spoke about hundreds of officers from surrounding suburban police departments being recruited to be a part of that security force, that large police force, in the event of civil unrest during the pendency of this trial.

AMY GOODMAN: And are you concerned about provocateurs, Nekima? Police had issued, what, like a year ago, an arrest warrant for the man known as “umbrella man,” who was filmed smashing windows of an auto parts dealership a few days after the police killing of Floyd, investigators saying the man is a white supremacist who sought to provoke violence against protesters. Also, the first fire, that setting of the fire of the police station, also believed to be a white supremacist.

NEKIMA LEVY ARMSTRONG: We are absolutely concerned about provocateurs. I mean, to this day, we haven’t seen umbrella man taken into custody. And so, if there’s evidence that he was engaging in the kind of activity that people caught him doing, breaking glass, being caught on camera doing so, very suspicious, why isn’t he in custody? We also are concerned about what other steps law enforcement may or may not be taking to track down provocateurs ahead of time. The overwhelming majority of our protests have been peaceful. And this has been for over the last six years, since we have been taking to the streets demanding an end to police violence in the state of Minnesota.

AMY GOODMAN: Well, Nekima, we thank you for spending this time with us. I’m sure we’re coming back to you soon. We will see how long this trial goes and what happens. Nekima Levy Armstrong, civil rights attorney, activist, founder of the Racial Justice Network, executive director of the Wayfinder Foundation, former president of the Minneapolis chapter of the NAACP.

Next up, we go to Texas, where the Republican governor is defying public health experts by ordering Texas to fully reopen at 100% and lifting a statewide mask mandate. Stay with us.

AMY GOODMAN: “Go Up Moses” by Roberta Flack. To get our daily digest, you can go to democracynow.org and sign up for the latest news stories and alerts. I’m Amy Goodman, with Juan González. 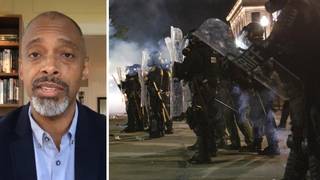