Biden Recognizes Armenian Genocide of 1915, Despite Decades of Lobbying & Denialism by Turkey

As President Joe Biden makes history by explicitly describing the 1915 massacre of Armenians by Ottoman Turks as a “genocide,” we speak with Peter Balakian, Pulitzer Prize-winning Armenian American poet and professor at Colgate University. On April 24, 1915, the Ottoman Empire began a systematic, premeditated campaign targeting the Armenian people, an unarmed Christian minority living under Turkish rule. More than a million Armenians were exterminated through direct killing, starvation, torture and forced death marches. Another million Armenian people fled into permanent exile. “It’s an important statement,” responds Balakian to Biden’s decision. “The plan was systematic,” he says of the genocide. “It involved the implementation of parliamentary acts, military intervention, mobilization of killing squads in order to arrest and deport every Armenian family from Turkey.”

AMY GOODMAN: This is Democracy Now!, democracynow.org, The Quarantine Report. I’m Amy Goodman. You can watch, listen and read transcripts using our iOS and Android apps. Download them for free from the Apple App Store or Google Play Store today.

President Biden has made history by explicitly describing the 1915 massacre of Armenians by Ottoman Turks as a genocide. Biden issued the statement Saturday to mark Armenian Remembrance Day. He wrote, quote, “Over the decades Armenian immigrants have enriched the United States in countless ways, but they have never forgotten the tragic history.” He said, “We honor their story. We see that pain. We affirm the history. We do this not to cast blame but to ensure that what happened is never repeated.” He went on to say, “The American people honor all those Armenians who perished in the genocide that began 106 years ago today,” unquote.

Biden is just the second U.S. president, after Ronald Reagan, to describe the mass killings as “genocide.” Turkey decried Biden’s decision and summoned the U.S. ambassador in Ankara in protest. For decades, Turkey has lobbied lawmakers in Washington to avoid calling the massacres genocide. This is a spokesperson for Turkish President Recep Tayyip Erdogan.

IBRAHIM KALIN: First of all, the statement by the U.S. president is very unfortunate, unfair. We completely reject it, condemn it. It is not supported by historical facts. It has no legal basis. And politically speaking, it’s an irresponsible, unconstructive statement.

HAKOB TER-KHACHATRYAN: We are thankful that Joe Biden, in his first year of the presidency, has already acknowledged the genocide, used the correct term, shared our sorrow and also made an appeal to the world that such hate crimes, such crimes against humanity shouldn’t be forgotten.

AMY GOODMAN: We’re joined now by Peter Balakian, professor of humanities in the Department of English at Colgate University. He’s the author of The Burning Tigris: The Armenian Genocide and America’s Response. In 2016, Professor Balakian won a Pulitzer Prize for his poetry collection, Ozone Journal. His new article for The Washington Post is headlined “To Armenians, Biden’s recognition of the genocide means the world.”

Talk about what it means, Professor Balakian.

PETER BALAKIAN: Well, thank you for having me back. It’s good to be with you.

It’s an important statement, for many reasons, and first one needs a little bit of context here, because the Turkish government’s campaign — and I’ll quote the distinguished international legal scholar Richard Falk — the Turkish government’s campaign is a “major, proactive, deliberate government effort to use every possible instrument of persuasion at its disposal to keep the truth about the Armenian genocide from general acknowledgment, especially by elites in the United States and Western Europe.” So, our listeners need to get a sense of how extreme the Turkish government’s efforts to deny history, then, by subsequent act, to demonize the victims in order to rehabilitate themselves — how extreme this propaganda campaign has been.

And so, it’s been important for other nations to acknowledge the Armenian genocide, often by legislative resolution. And I’m happy to say the U.S. government did this. Both the Senate and the House did this in the fall of 2019, joining 30 other countries in Europe, the Middle East and South and North America. So, there’s been a worldwide rejection — and I think I could even call it a kind of ethical outrage — against Turkey’s denialism.

And so, President Biden has now added an important voice to a world movement. And because the U.S. is such a major power and President Biden has become, in such a short time, a really important moral leader, bringing the U.S. back into its moral force as a nation in the community of nations, this statement carries a lot of ethical weight and, again, a redress to a very corrupt — and what I would call an immoral — campaign to deny history and perpetrate a kind of violence against the survivor community.

AMY GOODMAN: In a moment I want to ask you to read one of your poems, but can you give us the background? I talked a little about what the Armenian genocide looked like, but explain to us what happened.

PETER BALAKIAN: Well, using the cover of World War I, a little bit the way the Nazis used the cover of World War II, as a screen behind which they could execute a campaign to exterminate, to eliminate a targeted minority group, a hated minority group, that the ruling party — in the case of the Ottoman Empire, the Committee of Union and Progress party, the Unionist party, deemed the Armenians to be an obstreperous minority group that was clamoring for civil rights and equal treatment for Christians and Jews under Ottoman law. This was a big part of the Armenian civil rights project from the 1890s down through the 1910s. Armenians were pushing the political envelope, asking for some major change inside Ottoman Turkey.

And this was met with massacre as punitive act, especially in the 1890s and the early years of the 20th century. But when the war broke out, the ruling elite in Turkey decided they had an opportunity to eliminate the entire Armenian population, a population of between 2 million and 2.5 million people, who were living on their indigenous homelands, as were the Greeks and the Assyrians, the two other major Christian populations of the Ottoman Empire, living on their indigenous homelands. And it’s worth noting that both other Christian minority populations, Assyrians and Greeks, were also wiped out. Before World War I and its aftermath was over, about 4 million Christians disappeared from Turkey.

And so, the plan was systematic, and it started with the arrest of the Armenian cultural and intellectual leaders on the night of April 24 in Istanbul, then Constantinople. And it involved the implementation of parliamentary acts, military intervention, mobilization of killing squads in order to arrest and deport every Armenian family from Turkey between 1915 and, probably, I would say, the end of the summer of 1916, when about 1.2 million Armenians were killed. More would be killed in the ensuing years, and another million would be exiled. Rape, abduction, forced conversion took the lives of another 200,000 Armenian women and children, in particular.

So, this was an important event in the history of modern human rights atrocities. And it is significant that Adolf Hitler said, eight days before invading Poland in 1939, “Who today, after all, speaks of the annihilation of the Armenians?” Hitler learned something from this event.

AMY GOODMAN: Professor Balakian, could you read your poem, “After the Survivors Are Gone”?

PETER BALAKIAN: Oh, happy to. I suppose the assumption behind a poem like this is that historical memory matters for many reasons, personal, ethical, humane, and I hope this poem picks up a little of that. “After the Survivors Are Gone.”

I tried to imagine the Vilna ghetto,
to see a persimmon tree after the flash at Nagasaki.
Because my own tree had been hacked,
I tried to kiss the lips of Armenia.

At the table and the altar
we said some words written ages ago.
Have we settled for just the wine and bread,
for candles lit and snuffed?

Let us remember how the law has failed us.
Let us remember the child naked,
waiting to be shot on a bright day
with tulips blooming around the ditch.

We shall not forget the earth,
the artifact, the particular song,
the dirt of an idiom—
things that stick in the ear.

AMY GOODMAN: Peter Balakian is the Pulitzer Prize-winning Armenian American poet and professor at Colgate University. Before we go, since you are a professor, can you briefly — we just have about 30 seconds or a minute — talk about Turkey’s success in colonizing American universities, endowing chairs that would then — these professors would deny the Armenian genocide? And does this continue through to today?

PETER BALAKIAN: Well, there was a movement by the Turkish government to do this. And we saw its most virulence in the 1990s. This happened at Princeton University with a scholar who was — or an alleged scholar who was hired to promote this denial project in the academy.

And it would be so important for Turkey to move forward, to stop the denialism, to let go of this racist hate project against its ethnic minority cultures, including the Kurds today, to start embracing democracy, human rights and diversity. The fact that Turkey has more journalists in jail than any country in the world over the last several decades, according to Human Rights Watch and Amnesty International, tells us something. And so, the project you note — 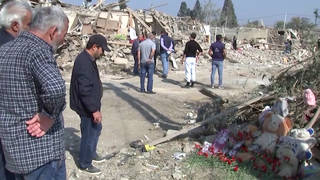