Protests have broken out against the Taliban in Kabul and other cities across Afghanistan as the militant group, at war for 20 years, now finds itself in power. Evacuation flights are continuing from Kabul, but the Taliban is preventing many Afghans from reaching the airport, with some being shot or whipped as they attempt to flee the country amid fears that the Taliban will impose draconian restrictions on everyday life as they did during their last time in power. Women especially are terrified of the future, says journalist Nasrin Nawa, who fled the capital Friday and whose sister is still in the country. “They are totally hopeless and stuck at their houses,” Nawa says.

AMY GOODMAN: Today, we spend the hour on Afghanistan, where protesters have taken to the streets for a second day in a row in defiance of the Taliban, which seized control of the country Sunday. Protests have been held in Kabul and other cities today to mark Afghan Independence Day. Al Jazeera reports two people died in the city of Asadabad after the Taliban opened fire on protesters waving the Afghan national flag. This comes a day after the Taliban killed three protesters in Jalalabad.

ASHRAF GHANI: [translated] All my colleagues in the West told me that if I don’t leave, things would be worse. I could have stayed and started a war, but I had a responsibility to my people, and I didn’t want to start a bloodbath like in Syria and Yemen.

AMY GOODMAN: Ghani said, if he had not left Afghanistan, quote, “the people of the country would have seen another president hanging on the noose of Sir-e-Aam.”

This comes as President Biden says U.S. troops will stay in Afghanistan until every American is evacuated, even if that means staying beyond his August 31st deadline. Evacuation flights are continuing from the Kabul airport, but the Taliban is preventing many Afghans from reaching the airport, with some being shot or whipped. A student in Kabul told Reuters no women could be seen on the streets after the Taliban took control of the city.

KABUL STUDENT: The girls are not out from their homes, and they are at home. And two days, I don’t see any girls in the street in Kabul. They are afraid. They are scared from the Taliban.

AMY GOODMAN: For more, we’re joined by three Afghan women who have fled their country. One left in 2017. One left last month but was planning to return. And one left Friday, just for a brief visit to the United States.

Let’s begin with Nasrin Nawa. She was in Kabul until Friday and joins us from Lincoln, Nebraska, where she’s a Fulbright scholar at the University of Nebraska-Lincoln. She’s a former journalist with BBC Persian based in Kabul. And her piece published Monday in The Washington Post is titled “My Taliban nightmare came true. I left, but my sister couldn’t.” In it, she writes, quote, “Since before I left Kabul a few days ago, I keep having the same nightmare: My sister running, sweating and bleeding, followed by Taliban fighters on the streets of Kabul. Then the nightmare came true.”

Nasrin Nawa, your sister is a journalist, like you. Tell us what happened to her on Sunday, after the Taliban seized control and since then.

NASRIN NAWA: She was out of the house, like so many other people in Kabul, because everyone was so terrified and desperate to complete some official documents and apply for some visas in other countries. My sister was in the bank to take some money, but the bank refused to get her money. Almost it was two days before the takeover that banks didn’t have enough money. So, we were actually facing with difficult things that we were thinking something bad is happening, but not such a thing that they get the power. When my sister heard that everyone is shouting, “The Taliban came, and you should run away,” so she starts running to the house, and she cannot find her way out of that crowd, and she’s so scared and crying. So, finally, she finds her way to the apartment. But at the house, just my family think that a war is coming, they will start killing people right now, it won’t be something easy and calm. So they tried to call some people to help my sister get out of the country at the moment, and it failed because flight got canceled.

NERMEEN SHAIKH: And, Nasrin, can you talk about what her situation is now, and all the other people you know of who are trying to leave Kabul, trying to leave Afghanistan?

NASRIN NAWA: They are totally hopeless and stuck at their houses. They don’t dare to go out for walking or doing something. And the only hope is right now that the normal life resume in Afghanistan, they start normal flights, that everyone can use it, because not everyone can get that emergency opportunity that the United States offered to vulnerable people in Afghanistan. My sister just told me an hour ago that we received guests from Herat city, another province, that they heard that you can just go out by reaching to the airport. But it’s not easy. They are stuck at our house, and they cannot find their way to the airport. Taliban don’t allow anyone, and it’s just violence running there right now.

AMY GOODMAN: And, Nasrin, can you describe what your sister witnessed once she was at home, to your neighbor’s house and one of the men in that house?

NASRIN NAWA: Yeah. It was last night. She was not able to sleep, and we were talking. She sent me a video of our neighbors, that he is beaten by Taliban. They are like four or five fighters with their big guns, and the person is just civilian without any gun. So, they searched his property, and they beat him and pushed him into the house and locked the doors.

So, we don’t know what happened after that, but it’s terrifying, because I was thinking, yeah, “What if my sister is the next person?” And I begged her to leave our house for a while and find somewhere that’s not known by people, because we almost are known by everyone in Kabul, at least in the city, that they can find easily our house. And we think that they are engaged in so many important things, like political things and settling the offices, and after that, they will start, very strategically, to find people who are against them and who don’t accept their rules and regime.

AMY GOODMAN: Nasrin, before we go, you wrote, “I called my sister and told her to go home and hide all of our identity cards. Then I told her that she needed to destroy her guitar. She said her hands were unable to do that, but I pleaded with her. I told her the Taliban’s hands are capable of killing you for your art.” Now, the Taliban insists that they are different now, that they won’t be attacking women, that they won’t be attacking opponents. What is your response to this?

So, bad things are happening. Taliban are doing exactly the same thing that they did in the previous regime. So it doesn’t make any sense that they say and claim and announce something so ridiculous, that, yeah, they won’t bother anyone. How can we believe, while you are beating everyone on the street that they are not obeying you right now? Maybe they are not very serious right now, and they are trying to show off their personality and their beliefs, they are trying to behave with courtesy. But it’s not real. It’s a tactical thing.

And I believe the Taliban, who took a poet last week, who killed a comedian 10 days ago, who raided some journalists’ houses in just these recent days and some other people that we don’t know who are they — how can they change? So, what were they fighting for? If they were changed, they would come to us and tell us, “Let’s share the power. We are changed. We believe in you. We respect your values. We won’t bother you. And you accept us as we are.”

So, we were able to do a deal with them without any international interference, but we were hoping that peace talks will have a result, and it didn’t happen. We invested everything to have a negotiation result, and now we see that it was just like a game, and everything was planned differently.

AMY GOODMAN: Nasrin Nawa, I want to thank you for being with us, Fulbright scholar, now at the University of Nebraska-Lincoln, a former journalist with BBC Persian based in Kabul. She left just on Friday. Her new piece, we’ll link to at democracynow.org, for The Washington Post, headlined “My Taliban nightmare came true. I left, but my sister couldn’t.”

Next up, we speak with two more Afghan women, another also a former journalist. They have both fled their country, a former Afghan refugee and New York Times reporter in Kabul and the director of the Afghanistan Mechanism for Inclusive Peace. Stay with us. 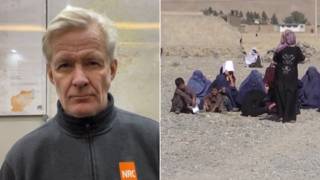