The U.S. Supreme Court ruled 5-4 to let stand a new anti-abortion law in Texas, which bans all abortions in the state after six weeks — before most people even realize they are pregnant — and allows for private citizens to sue anyone who “aids and abets” a person in getting an abortion. Nancy Northup, president and CEO of the Center for Reproductive Rights, says, “It is clearly an unconstitutional law” that must be reversed. “It’s absolutely an abomination,” says Northup, who urges Congress to pass new legislation protecting reproductive rights as legal challenges to the Texas law continue.

AMY GOODMAN: We’re beginning with the major news from the U.S. Supreme Court, which, on Wednesday, refused to halt a Texas law that bans most abortions, ruling 5 to 4 the law can remain in effect even while legal challenges against it continue. The ruling is the court’s biggest break yet from the landmark 1973 Roe v. Wade ruling that legalized abortion nationwide.

Chief Justice John Roberts joined the court’s three liberal justices in their dissent, with Justice Sonia Sotomayor writing, quote, “The court should not be so content to ignore its constitutional obligations to protect not only the rights of women, but also the sanctity of its precedents and of the rule of law,” she wrote. All five of the justices who allowed the abortion ban to stay in effect were appointed by Republican presidents, three of them by Donald Trump.

President Biden said the Texas law, quote, “blatantly violates” the constitutional right to abortion enshrined in Roe v. Wade. It is the most restrictive anti-choice law in the nation, barring abortions about six weeks into a pregnancy — before many people even know they’re pregnant. There is no exception for rape or incest. The law also allows anyone in Texas to sue patients, medical workers, a cab driver or even a patient’s family or friends who, quote, “aid and abet” an abortion.

Texas clinics say they’ve had to cancel most of their appointments since the law took effect Wednesday. Providers say at least 85% of abortions they performed are now outlawed.

For more, we’re going back to Nancy Northup, president and CEO of the Center for [Reproductive] Rights.

Nancy, we spoke to you yesterday. Welcome back. Talk about the significance of what came down, once again, just before midnight last night.

NANCY NORTHUP: Well, we got the order from the court, which you summarized, which was a 5-4 decision allowing this law in Texas to stay in place. We are absolutely devastated. I mean, the inaction of the court, not stepping in to block this unconstitutional law, means that it will be in effect in Texas for the foreseeable future. Yes, the litigation still goes on, but, unfortunately, the court of appeals, the U.S. Court of Appeals for the 5th Circuit, denied our request to hear, in an expedited way, the state’s appeal to that court, and so we are stuck in this limbo.

But you know what? People in this country, we should not be stuck. You know who can fix this? The United States Congress can fix this. The Women’s Health Protection Act has been introduced in every Congress since 2013. And right now the House of Representatives has enough votes to pass it. Forty-eight senators are on it in the Senate. And it is time for a drumbeat to say to Congress, “The court has let us down. You need to step in.” The Women’s Health Protection Act, that’s what needs to be on the lips of everybody who supports abortion rights in this country, because we can fix this.

AMY GOODMAN: We don’t hear Nermeen. Let me ask a question, and we’re going to get Nermeen’s mic going. Can you talk about the role of Chief Justice Roberts?

NANCY NORTHUP: Yes, it was so important. The chief justice did join the three other liberal justices in a dissent. He was clear that the status quo should be maintained, that Texas’s law should not go into effect while these legal issues are being worked out. He didn’t go as far as the other justices, who talked about how clearly unconstitutional this law is, but he was very clear that the right thing to do here is to keep the law from going into effect while the legal battle goes on.

NANCY NORTHUP: Well, absolutely. The law is clearly unconstitutional, because every court who’s looked at a six-week ban has stopped it. The Supreme Court has been clear for more than 50 years.

What Texas did was very sneaky. As Justice Sotomayor put so well in her opinion, they tried to evade court review by deputizing people in the state — basically, anti-choice activists — to enforce the ban themselves through suing doctors, through suing clinic workers, through suing people who support people who have an abortion by driving them or loaning them money.

And so, that issue is the one that — you know, I would say, very disingenuously — the majority of the Supreme Court said, “Well, these are complicated legal issues. We have to work them through.” They’re not complicated. The law denies women in Texas the ability to get an abortion, and that was granted in 1973 — in a case from Texas — and has been the law ever since.

So, but that is what Texas, by saying, “We’re not enforcing the law. We’re going to give it to individual citizens to be vigilantes” — that’s what the court is saying is a complicated, unsettled case and why they didn’t issue the injunction. But again, as the chief justice said, you keep things in place while you’re looking at those legal issues and while the other justices said clearly — Sotomayor, Kagan, Breyer — it is clearly an unconstitutional law. And they basically just rewarded Texas for doing something sneaky.

AMY GOODMAN: And if you can explain once again, as you did yesterday, for those who aren’t up on this law, the significance — I mean, what they did, how they evaded the state, and who now can sue, and who can be sued?

NANCY NORTHUP: Yeah, it’s absolutely frightening. So, Texas said, “We’re not going to enforce the law,” because they knew it would be struck down in a nanosecond. What they said is that any person can sue an individual who assists a woman or a pregnant person having an abortion after six weeks, which, of course, is when most abortions, 85, 90%, take place in Texas.

So, they basically said you can — you know, Amy, if you drove someone to a clinic in Texas — right? — I could sue you. I get a bounty of $10,000, plus you’re going to pay my attorneys’ fees. Plus, even if you drove someone to an abortion in Dallas, I can sue you and harass you by suing you in Houston and make you appear in court in Houston or El Paso or the Rio Grande Valley or wherever I feel like suing you, even though you never stepped foot in any of those areas.

AMY GOODMAN: And you have nothing to do with the person, the pregnant person, perhaps, who was going for an abortion — you, the person who decides to sue.

NANCY NORTHUP: Oh, yeah. You don’t have to know who they are. All you can — you can just be a person who every day goes outside the clinic, you know, yelling and screaming and trying to stop women from getting abortions. And, in fact, you know, that was — at Whole Woman’s Health, who is the lead plaintiff in this case, at their clinic in Fort Worth on Tuesday night, when they were providing services right up into the deadline, there were anti-choice activists outside the clinic. When it got dark, they were shining their lights into the parking lot. Very intimidating behavior. And these are the people who are now in power to harass and sue all over the state of Texas. It’s absolutely an abomination.

And for five justices of the Supreme Court to act like “This is business as usual. We’ve got some procedural issues here, some complicated issues. We’re not going to decide,” I mean, it is as if Texas said, “We’re going to deny women the right to vote, but we’re not going to enforce it. We’re going to let individuals say you drove me to the polls, or you told her where the polling place was,” and then the Supreme Court said, “Well, we can’t decide this issue, because we don’t know: Maybe you can do that; maybe you can’t do that.” Right? It’s the same thing: deny someone the right to vote, deny someone the right to have an abortion. They are both constitutionally protected, and the Supreme Court has stood by to do nothing.

AMY GOODMAN: Nancy Northup, we want to thank you for being with us, president and CEO of the Center for Reproductive Rights.

Later in the show, we’ll look at how the Taliban treats women and also how the U.S. invasion and forever war affected women’s lives in Afghanistan. But next up, we go to Colorado for a major development in the movement for police accountability. Three Colorado police officers and two paramedics have been criminally charged in the death of 23-year-old Elijah McClain. Stay with us. 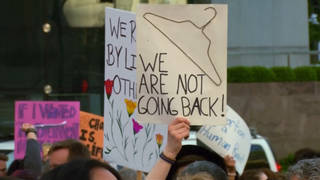