Two competitive congressional races are heating up in Texas. Former labor organizer Greg Casar and immigrant human rights lawyer Jessica Cisneros have both gained national endorsements from progressive lawmakers like New York Congressmember Alexandria Ocasio-Cortez, who traveled to the state to campaign for them this past weekend. “We have a real opportunity for big progressive change here in the heart of the state where we’ve seen so many oppressive laws be pushed through the pandemic,” says Casar, who is running in Texas’s 35th Congressional District, which covers eastern Austin and eastern San Antonio.

AMY GOODMAN: We wanted to bring in another person into this conversation who is also participating in the March 1st primary. He is congressional candidate Greg Casar, who’s running in an open primary in the 35th District, former city councilmember in Austin. Monday, he was endorsed by Senator Bernie Sanders. Over the weekend, Congressmember Alexandria Ocasio-Cortez campaigned in Texas for Casar, as well as Jessica Cisneros, who is challenging the anti-choice, pro-business Democratic Congressmember Henry Cuellar. I wanted to play a clip of AOC in Texas.

REP. ALEXANDRIA OCASIO-CORTEZ: We have to make sure that this becomes a springboard for the state. That’s why I’m here, for the long game, for the long haul. I don’t care how many cycles it takes.

If you can weigh in on what this restrictive law means for you in the March 1st primary and the significance of what’s happening in Texas right now, the importance of this primary?

GREG CASAR: In this primary in Texas, we have a real opportunity for big progressive change here in the heart of the state, where we’ve seen so many oppressive laws be pushed through the pandemic. I, as a city councilmember, was working — we’re working hard alongside the community to try to keep people alive and save people’s jobs and keep people from being evicted. But the Legislature, instead of focusing on taking care of folks, people like Governor Abbott, virtually banned abortion in our state, especially for low- and moderate-income people. They discriminated against immigrant communities and LGBTQ communities. And then they focused on keeping people from getting to the ballot box, instead of keeping people alive.

And so, voters right now, I think, are so sick and tired of that status quo that there is a real opportunity for progressive change, not just in my congressional race but in many congressional races here in Texas, to sort of set the stage for progressives in this first primary across the country, because there’s so much talk about this being, quote-unquote, “a bad year” for progressive change, and I don’t think that’s going to be the case. I think here in Texas we can set the stage and show that in the heart of where we’re seeing such oppressive policy, people can turn out and vote and say that they’re sick and tired of the status quo as we have it here in Texas.

JUAN GONZÁLEZ: And, Greg Casar, speaking in terms of voting rights, could you talk about — especially in the congressional redistricting, Texas is a state where Latinos are nearly 40% of the entire population of the state. What happened with the redistricting? And how do you think that will affect the ability of the mass of voters to be heard this time around?

GREG CASAR: Yeah. Texas is not a red state, as you know, Juan. It is a underorganized state. It is a place where the vast majority of people believe in a $15-an-hour minimum wage and guaranteed healthcare and Medicare for All. This is not a place where people want to continue these GoFundMe campaigns for people to be able to pay for lifesaving care. It’s a place where we have seen mostly growth in communities of color, but we didn’t actually see new districts in redistricting for communities of color, especially the Latino community.

But the answer to that, I believe, is not to just throw up our hands and give up. The answer to that is for folks to run for Congress in these seats, not just elect any old Democrats but actual progressives who believe that we should pass voting rights laws, end the filibuster and end and override these kinds of state restrictions, like happened in the civil rights movement. That’s what we need in Texas. We need progressive champions at the federal level to come and have our democracy work for us in the South.

JUAN GONZÁLEZ: And I wanted to ask you about an issue that you’ve been very vocal about, the fixing of the Texas power grid. This week marks one year since the terrible winter storm that wreaked so much damage in terms of power in Texas.

GREG CASAR: Yes, this is the one-year anniversary of when I had constituents die here up in my neighborhood as a councilmember. There were people lighting their furniture on fire to stay warm, turning on their ovens and facing potential carbon monoxide poisoning. We were in the gym of the local high school, right up the street from where I am right now. We were delivering blankets to seniors that we were pulling out of senior homes, delivering them blankets to keep them warm, many people donating blankets from their homes that didn’t have power themselves. And at the time, we had people like Senator Ted Cruz getting on an plane and going to the beach.

And so, this is a real moment in Texas where we can talk about the climate crisis. Here in the energy capital of the world, the lights went out. And we can actually not just see the climate crisis as theoretical, but it is here in our backyards. And so, it’s a moment for us, as progressives, to talk about how Texas should be interconnected with the rest of the country’s power grid, while we have to invest in renewable energy and fight back against corporate power, because the Legislature’s response, the governor’s response to that climate crisis was to write a bill that, quote-unquote, “fixed the grid” but left a huge loophole for natural gas suppliers who are the biggest contributors to this power grid failure. Right after that, some of the CEOs of the biggest natural gas supplier companies showed up with million-dollar checks for the governor.

And that’s what people are sick and tired of, is the Republican status quo — and, frankly, a corporate Democrat status quo that leaves us in the same place. We’ve seen, with united Democratic control in D.C., that we can’t just have any old Democrats elected but actual folks that are going to step up, step up against fossil fuel interests and protect good union jobs, transition folks to renewable energy and prevent things like the future winter storms and fires and floods to come.

AMY GOODMAN: You and Jessica Cisneros have campaigned together. Can you talk about the redistricting that’s led to you and your district? And, of course, she is doing a rechallenge in hers.

GREG CASAR: Yes, here in Texas, we just underwent redistricting. They tried to make it so there would be no new Democratic seats in Texas, even though the vast majority of the growth here has been in communities of color, working-class communities, that reject the right-wing regime that we are under. And ultimately, it created the opportunity for one new open Democratic seat. Congressman Doggett, a longtime member of Congress here from the Austin area, chose to run in the new western Democratic seat, leaving open my seat, which is a majority folks of color and working-class communities packed into one district. Really, this district is meant to dilute the power of working-class communities by putting so many voters into one district. And what we’re trying to do is fight back against that dilution of power by organizing in this district and driving up turnout despite voter suppression.

Then, just south of my district, there’s Henry Cuellar’s district, where Jessica Cisneros is mounting a challenge — again, a big and important primary where organizers and progressive organizations are all coming together. Just —

AMY GOODMAN: Henry Cuellar, whose home was just raided by the FBI.

GREG CASAR: That’s right. The dynamics of that race have really shifted. And there’s a lot of people coming out and voting in the San Antonio area down to South Texas. Then there’s a competitive race along the border, which Republicans are trying to sort of replay what they did in 2020 and see if they can make gains along the border. But the hope is that real economic populism and both — paired with racial justice, can hold that seat for a more progressive candidate.

AMY GOODMAN: Well, we want to thank you for being with us, Greg Casar, former labor organizer and Austin city councilmember, currently running for Congress in Texas Congressional District 35. It is the first primary in the country of 2022. The whole country is watching. And we want to thank Anthony Gutierrez, executive director of Common Cause Texas.

That does it for our show. Very happy belated birthdays to Messiah Rhodes, Brendan Allen and Danielle Wu! Democracy Now! currently accepting applications for a human resources manager. Check out the job at democracynow.org. I’m Amy Goodman, with Juan González. Stay safe. Wear a mask. 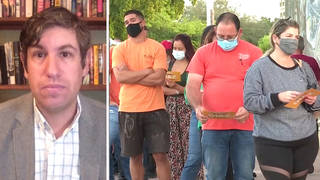