Early voting in the first 2022 primary elections kicked off Monday in Texas with extreme new anti-voter laws in effect. The Republican-enacted restrictions have already caused Texas voters issues, with some 40% of ballots in Houston rejected. We speak with Anthony Gutierrez, executive director of Common Cause Texas, one of 30 civil rights groups who sent a letter to the Texas secretary of state on Monday calling for stronger action to ensure voters have access to the ballot leading up to the state’s March 1 primary. He describes how the laws are also facilitating right-wing efforts to intimidate Black and Brown voters at the polls.

AMY GOODMAN: This is Democracy Now!, democracynow.org, The War and Peace Report. I’m Amy Goodman, with Juan González, as we turn now to Texas, where the first primary of the 2022 midterm elections kicked off Monday with early voting and a highly restrictive voting law in effect. On Monday, 30 civil rights groups sent a letter to the Texas secretary of state calling for stronger action to ensure voters have access to the ballot leading up to the March 1st primary.

Measures enacted by Republican lawmakers under the state’s Senate Bill 1 have already caused problems for Texas voters, with local election officials reportedly rejecting a high number of mail-in ballots that lack newly required ID information. Texas already has strict rules for voting by mail, but, under S.B. 1, voters must now include a state identification number, like a driver’s license number or a partial Social Security number, both when they request a mail-in ballot and when they return their completed ballot. The place to include the ID is underneath the envelope flap, and apparently it’s easy to miss. The new ID rules had already led to thousands of rejected ballot requests, and now officials say they’re facing high rates of faulty ballots. In Houston, Harris County, some 40% of the ballots, nearly four in 10, have been rejected due to a missing ID number. In Dallas, more than 25%, about 28%, more than a quarter, of the ballots have been rejected.

For more, we go to Austin to speak with Anthony Gutierrez. He is executive director of Common Cause Texas.

We welcome you to Democracy Now! Can you lay out the issues right now, what the bill does and what’s happening to people who want to vote and participate in elections?

ANTHONY GUTIERREZ: Sure, I can, yeah. And thank you for having me.

So, first of all, there is a lot in S.B. 1. I can talk about some of the issues that we’re seeing now, and then some of the issues we’re looking out for, but, I mean, it’s a lot to unpack. You hit on the big one that we’ve seen so far, really, to vote by mail. The problem there is not just that there’s a field that is underneath the flap of an envelope; the problem is they are also asking you to put either your driver’s license number or the last four of your Social Security number, and whichever number it is has to be the same number that you originally used on your voter registration form when you first registered. I mean, for me, that was, I don’t know, 18 years ago probably. Like, for most of us, we probably don’t remember what we had for lunch three days ago, but you’re supposed to remember which one of those numbers you used when you first registered to vote. That is why we are seeing these ridiculous rejection rates of 30 to 40%, not just on the applications but also on the vote-by-mail ballots themselves. There are ways for people to cure the ballot if they make a mistake on there, but, I mean, it really comes down to time. And are people going to have enough time to go take a phone call from the elections office and figure out what exactly they need to do when they go back and get their ballot cured?

Beyond that one, we also saw there was — in S.B. 1, there was a criminal penalty that was increased for false voter registration. Now, the implementation error here by the secretary of state was they were telling people, “The only voter registration forms we can distribute to you are the ones that have this new language on them.” So, because they were demanding, like, this specific thing has to be in the fine print, that meant, for organizations like the League of Women Voters, they were only able to request and receive maybe 50 voter registration applications, even though they were going to be going to like — you know, like naturalization ceremonies, where you register hundreds of people at a time.

And this was also — people may have heard there was a, quote-unquote, “paper shortage” that the secretary of state was citing, which really seemed to only affect voter registration forms in Texas. I mean, every other Southern state was offering, like, “We have paper, if y’all for some reason need paper for your voter registration.”

But now early voting started in Texas yesterday. What we’re watching now, one of the big ones that was in Senate Bill 1 was a really dangerous empowerment of partisan poll watchers. If folks don’t know what a poll watcher is, this is someone that’s appointed by a campaign or a political party. They get to stand inside the poll site, and they’re supposed to just watch operations. If they see something they think is improper or illegal, they can talk to the election judge. In Texas, we have seen a long history of poll watchers being used for nefarious purposes. In Harris County, for several election cycles, we’ve seen right-wing extremist groups recruiting and training white poll watchers to go down to Black and Brown poll sites in minority areas and really just kind of be intimidating, just to disrupt operations, to get too close to voters. And what the bill does is allow them now sort of free rein inside the poll site to be able to walk around a lot more. They’re allowed to get near enough to voters to see and hear conversations with election judges. And there’s all kinds of new complicated rules as far as what an election judge must do if they want to remove a disruptive poll watcher from the poll sites.

And there’s a lot more. Those are a few of the top concerns that I have regarding S.B. 1, how it’s affecting voting in Texas today.

JUAN GONZÁLEZ: Yeah, and, Anthony Gutierrez, could you talk about also the provision of S.B. 1 that declares it a crime to encourage unsolicited Texans to vote by mail? What’s happened with that provision?

ANTHONY GUTIERREZ: Right. So, there was a recent court decision that put a halt on that piece. I mean, what the provision was was prohibiting election officials from giving out too much information about how to vote by mail, and prohibiting them from proactively sending out vote-by-mail applications, which both of them — you know, I feel like most people outside of Texas would hear that and just, you know, be flummoxed. I mean, the idea that you’re going to prohibit an election official from talking about voting, in any sense, in any context, is just on its face absurd. But that’s what happened. At the moment, that law is not in effect, but we shall see what happens. Texas, the state, is surely appealing this. 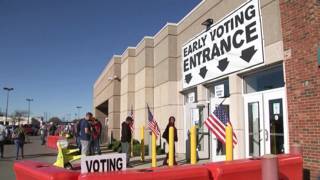