A Call for Peace: Russian & U.S. Women Push for Diplomacy, Not Military Action, to Resolve Crisis

U.S. Secretary of State Tony Blinken and Russian Foreign Minister Sergey Lavrov have agreed to meet next week as tension remains high over Ukraine. Meanwhile, Russia has announced plans to stage massive drills on Saturday of its nuclear forces, including multiple practice missile launches. We speak with Russian journalist Nadezhda Azhgikhina, one of a group of two dozen independent Russian and American women who released an open letter this week calling for peace. The letter reads, “We are united in the belief that diplomacy, dialogue, engagement and exchange are urgently needed to end the current crisis and avert a catastrophic military conflict that could spiral out of control — even push the world to the precipice of nuclear war.”

SECRETARY OF STATE ANTONY BLINKEN: We don’t know precisely how things will play out, but here’s what the world can expect to see unfold. In fact, it’s unfolding right now, today, as Russia takes steps down the path to war and reissued the threat of military action. First, Russia plans to manufacture a pretext for its attack. This could be a violent event that Russia will blame on Ukraine, or an outrageous accusation that Russia will level against the Ukrainian government. We don’t know exactly the form it will take. It could be a fabricated so-called terrorist bombing inside Russia, the invented discovery of a mass grave, a staged drone strike against civilians or a fake — even a real — attack using chemical weapons.

AMY GOODMAN: Blinken also made a remark during his speech that was widely viewed as a reference to false intelligence presented by former Secretary of State Colin Powell about Iraq’s alleged weapons of mass destruction nearly 20 years ago.

SECRETARY OF STATE ANTONY BLINKEN: I’m mindful that some have called into question our information, recalling previous instances where intelligence ultimately did not bear out. But let me be clear: I am here today not to start a war but to prevent one.

SERGEY VERSHININ: [translated] Now, as regards to the alleged prepared aggression of Russia against Ukraine, this was done by the secretary of state of the United States, and he listed the provocations that could be used as a pretext to invade Ukraine. This is regrettable. I would even go so far as to say that they are dangerous, because they bring in more tensions into the already tense atmosphere. But these are words and statements. We made a large number of statements, on various levels, which underscore what it is that we propose and what we intend to do. But it’s very unfortunate that those statements at the highest level that came out of Moscow were not heeded. But those are statements. What do we have that are actual facts? The fact is, is that the Russian forces were in the Russian territory and remain on the Russian territory.

AMY GOODMAN: The war of words at the United Nations came as Ukraine and Russian-backed separatists in the Donbas region accused each other of violating a ceasefire agreement.

Meanwhile, Russia has announced plans to stage massive drills Saturday of its nuclear forces. The exercises will reportedly include multiple practice missile launches.

This all comes as talks continue. President Biden is hosting a phone call today with NATO allies. Vice President Kamala Harris is attending the Munich Security Conference, where she’s scheduled to speak with the president of Ukraine, the German chancellor, as well as the head of NATO. Earlier this week, a group of Russians and Americans released a joint letter calling for peace.

For more, we go to Warsaw, Poland, to speak with the Russian journalist Nadezhda Azhgikhina. She is the director of PEN Moscow and is usually based in Moscow. She authored the open letter titled “Independent American and Russian Women Call for Peace.” It was published in the independent media outlet Novaya Gazeta and The Nation magazine. In the letter’s introduction, she writes, quote, “For the last few weeks I have felt that I’m watching a horror film in which Russia and America accuse each other and discuss the possible consequences of conflict.”

Nadezhda Azhgikhina, welcome to Democracy Now! It’s great to have you with us, from Warsaw, where you are for a few days. What is happening? What do you understand is the cause, why this conflict has escalated to this point?

NADEZHDA AZHGIKHINA: Good morning. Thank you very much. I am proud to be with you, and I’m very happy to talk about our joint initiative, when Russian and American women applied to everybody and called for peace. And our letter is distributed now in many social networks and published already in one more independent media in Russia, New Izvestia news.

And I think it’s very important because we suggest — we call for an alternative, because war rhetorics, which we have everywhere — it’s ubiquitous — it’s really dangerous, and it is time to stop it. It is time to offer an alternative, to offer — to call for creative diplomacy, as it was told in our letter, and to raise our voices for peace. Many people do not believe that their voices matter, but it is. And it’s important to listen to people and listen to women. And women are usually neglected during top-level discussions.

And I am happy that people who subscribed to this letter, 12 women from Russia and 12 women from the United States originally, we have already experience of dialogue, what started during perestroika in the '90s, and we have this dialogue for around here, under the umbrella of Women Transforming Our Nuclear Legacy. It's an online dialogue from Russian and American women, and we discuss different issues: consequences of radiation on women’s health, domestic violence, Russian-American feminist cooperation, education, COVID situation. And last summer, we already prepared an open letter, a call before Russian-American summit to two presidents, to remind about danger of nuclear weapons, of nuclear armament. And it was very important.

So, our natural intention in the beginning of 2022, when we faced this enormous tension — I do not remember anything like this in my life — to call for peace and to remind that nuclear weapons is a real threat and our countries have 90% of it. And we should step down, and we should not increase this military aggressive rhetoric, which is really dangerous.

AMY GOODMAN: Nadezhda, in the letter, you write, “At a time when poverty is increasing in the US, Ukraine and Russia, when the world collectively faces the existential threat of climate change, a pandemic that has taken 5.8 million lives and caused rising 'deaths of despair,' declining life expectancy and extreme inequality, isn’t it time to think anew?” Can you talk about how the Russian people feel about this?

NADEZHDA AZHGIKHINA: Russian people feel that it would be the best to think about our everyday life, about people’s needs, about climate. You know, we live in a global world. We cannot divide, because — one country from another, because climate change is for everybody. Nuclear threat is for everybody. Nothing could happen after that. And we should join our efforts to combat diseases, not only COVID, because many people lost their lives not only from the virus but from different consequences, from lack of proper medical aid, about other diseases. We have plenty of things to think about and to unite our efforts for that, and I do believe we could. And the Russian-American relationship, you know, more than 200 centuries, and we experienced very different epochs, epochs of cooperation, combat together with the Nazi army, some joint efforts in space, and so on and so forth. And I do believe we could come to better situation in this field.

AMY GOODMAN: Can you describe how the Russian media is dealing with this? I mean, in the U.S., we have a media that clearly is bringing out the voices of people who are beating the drums for war. Are you hearing other voices like yours?

NADEZHDA AZHGIKHINA: You know, Russian media, like media everywhere, is in crisis. We have a number of independent media. We have state propaganda. And I would like to remind you that, not now but several years ago, probably after Obama’s statement that Russia was a second-rate regional state, some propagandists began to remind our audience that Russia had nuclear weapons. And propaganda of war, you know, it existed all the time.

Unfortunately, now we face a situation of a so-called post-truth world, and journalism is in crisis. Journalism does not count on facts as much as before, and the opinions are number one. Facts are not that important. People do not prove facts. And it’s a dramatic situation.

And I should tell you that — what about Russia? Of course, in Russian media, you could hear different voices, but Russian media landscape is very puzzled. People who focused on official propaganda, they usually do not pay attention to social networks, to independent media, and vice versa. It’s a pity.

But I should tell you that nobody, from people I know, despite what political orientation, what are their priorities and so on — nobody believes in real war. But everybody is afraid of this war rhetorics, which is really threatening and very dangerous.

And those arguments in my country, which experienced awful wars — and during Second World War, which is a great patriotic war in Russia, more than 27 million people died and have been killed. And every family remembers it. But, unfortunately, those people who do remember the war, they are passing away. Very few of them are still alive, and they are very old. And for young people, war looks like a sort of computer game. And that is frightening. That’s why I do believe it’s very important to remind about real price of the war, about real danger of the war. And we should change these rhetorics, because the words matter. It is very important to use proper words, not to have this aggression rhetoric.

AMY GOODMAN: Nadezhda Azhgikhina, we thank you so much for being with us, Russian journalist, director of PEN Moscow, authored an open letter titled “Independent American and Russian Women Call for Peace,” published earlier this week in Russia and the United States in The Nation magazine.

Coming up next, we spend the rest of the hour with the acclaimed documentarian Stanley Nelson. His new documentary, Attica, about the 1971 prison rebellion and massacre, was just nominated for his first Academy Award. Stay with us. 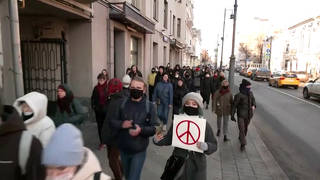