We speak with human rights and environmental lawyer Steven Donziger, who was released Monday from nearly 1,000 days of house arrest as part of a years-long legal ordeal that began after he successfully sued Chevron on behalf of 30,000 Ecuadorian Amazonian Indigenous people. Donziger calls his misdemeanor sentencing and arrest “a retaliation play by Chevron and some of its allies in the judiciary,” meant to intimidate other human rights advocates and lawyers from pursuing environmental justice. “Chevron tried to use me as what I would say is a weapon of mass distraction so people wouldn’t focus on the environmental crimes they commited in Ecuador,” continues Donziger, who says, “I didn’t really understand freedom until it was taken away.”

We end today’s show with human rights and environmental lawyer Steven Donziger, who has just been released from nearly a thousand days of house arrest as part of a legal ordeal that began after he successfully sued Chevron on behalf of 30,000 Ecuadorian Amazonian Indigenous people for dumping 16 billion gallons of oil into their ancestral land. In 2011, Ecuador’s Supreme Court ordered Chevron to pay $18 billion in a landmark ruling seen as a major victory for corporate accountability. But Chevron refused to pay or clean up the land. Instead, it launched a legal attack on the ruling, targeting Steven Donziger.

Last year, the judge in the case found Donziger in criminal contempt of court after he refused to turn over his computer and cellphone, sentencing him to six months in prison for contempt of court — a misdemeanor. In an extremely unusual legal twist, the judge had appointed a private law firm with ties to Chevron to prosecute Donziger, after federal prosecutors declined to bring charges. After 45 days in prison, he returned to house arrest — until Monday, when he finished his sentence and was released, after about a thousand days under house arrest. Last night he had a block party in Manhattan celebrating his freedom.

We welcome you to Democracy Now!, Steven Donziger. How does it feel to be free?

STEVEN DONZIGER: Thank you, Amy, for that introduction. It feels wonderful. You know, honestly, I didn’t really understand freedom until it was taken away. We take it for granted.

And, you know, what happened to me — and, more importantly, the people down in Ecuador who I represent, who are still suffering tremendously from toxic pollution caused by Chevron — it was just something that I think was entirely inappropriate and unethical, and I don’t think I should have spent a day in detention, as a successful human rights lawyer. But there was a — it was a retaliation play by Chevron and some of its allies in the judiciary.

You know, I dealt with it. We built our campaign even stronger during my time in detention. It was not fun. It was painful for me and my family. But we’re thrilled that that phase of this battle is over, and we’re ready to move on to the next part, which is really try to get the judgment that the people of Ecuador won complied with by Chevron so they can clean up the toxic pollution on their ancestral lands. That’s where we’re going to be focused now.

JUAN GONZÁLEZ: And, Steven, are you still a prisoner of Chevron? You’ve been disbarred from practicing law in New York. Can the law firm, Gibson, Dunn & Crutcher, still come for you?

STEVEN DONZIGER: You know, I don’t know. I just want to be clear, though: I have been disbarred. It was all based on this Chevron retaliation case, you know, carried out by the Gibson Dunn law firm, that was largely based on the testimony of an admitted lying witness that Chevron paid a bunch of money to and coached for 53 days. The judgment in Ecuador has been validated by multiple appellate courts, including the Supreme Courts of Ecuador and Canada, for enforcement purposes. Chevron still faces enormous risk.

My disbarment was based on a finding of one judge here in New York who contradicted the findings of 28 appellate judges in Ecuador and Canada. But on that basis, I had my law license taken without a hearing. So one of the things I’m going to be focused on is getting my law license back. That said, I’m still in a position to advocate to help my clients. I’m not going to court anyway. There are other members of our legal team that play that particular role. But it is important to establish the principle that a human rights lawyer who does this kind of frontline important human rights work and Earth defense work not be disbarred, not be jailed for doing his or her job. And that’s what happened to me.

And I will say the larger issue — you know, this case goes well beyond me. I want to be very clear about that. Chevron tried to use me as what I would say is a weapon of mass distraction, so people wouldn’t focus on the environmental crimes they committed in Ecuador. This goes way beyond me, because, ultimately, if we allow this type of private corporate prosecution — I was prosecuted, by the way, not by the U.S. government, which rejected the charges against me that were filed by a federal judge, who then appointed a private law firm that had Chevron as a client. And that was my prosecutor, which explains this extraordinary length of detention for a misdemeanor. You know, I was in detention 993 days for a misdemeanor crime. I assert my innocence, but even if I were guilty, the maximum sentence is 180 days. So why was I in for 993 days?

So there were a lot of irregularities here that we plan to challenge and try to correct. But, ultimately, this was really about a corporate capture, I believe, of an element of our federal judiciary in retaliation for my work. And that’s a playbook that I think the industry — the fossil fuel industry, that is — plans to continue to use against lawyers and activists who are a little too successful in [inaudible] —

AMY GOODMAN: Steven, we’re going to have to leave it there because we’ve come to the end of the show and the end of your Zoom capacity, it sounds like. Steven Donziger is a human rights lawyer who successfully sued Chevron in Ecuador for dumping oil and toxic waste in the Amazon, just off house arrest after nearly 1,000 days. 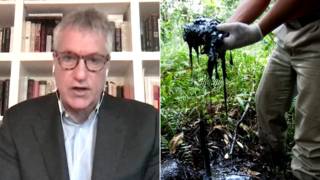