Tens of thousands took to the streets across the U.S. Saturday to protest threats to abortion rights as part of a coordinated day of action, under the banner “Bans Off Our Bodies.” We speak with Renee Bracey Sherman, founder and executive director of pro-abortion group We Testify, about the racist history behind anti-abortion movements and the failure of Democrats to protect reproductive rights over the years. “Abortion restrictions were really to push white people to have more babies and restrict and … control the fertility of Black and Brown people across this country,” says Sherman. Her new piece for Time magazine is headlined “Voting Won’t Save Abortion Rights.”

We end today’s show looking at the massive abortion rights protests that took place across the United States Saturday, kick-starting what reproductive justice advocates are calling a “summer of rage.” Tens of thousands of people took to the streets in over 400 cities and towns, from Washington, D.C., to New York City, Chicago, Atlanta, Austin, Houston, Seattle, Phoenix, Los Angeles, as part of a coordinated day of action, under the banner “Bans Off Our Bodies.” The uprising comes in response to the recent publication of a leaked Supreme Court draft opinion showing the court is poised to overturn Roe v. Wade. Monica Simpson, the executive director of SisterSong, spoke at the D.C. rally.

AMY GOODMAN: This comes as frustration with President Biden and the Democratic Party is growing, as the party controls the House and Senate but has failed to put forward a plan to preserve federal abortion rights even if the Supreme Court overturns Roe v. Wade. Last week, Democratic Senator Joe Manchin of West Virginia joined with Senate Republicans blocking the efforts. Meanwhile, House Speaker Nancy Pelosi and other top Democrats are continuing to support a conservative anti-abortion Democrat in Texas, Congressmember Henry Cuellar, despite his long-standing opposition to reproductive rights. Cuellar is the last anti-choice Democrat in the House and faces progressive challenger Jessica Cisneros in a tightly contested primary election runoff May 24th.

For more, we’re joined in Washington, D.C., by Renee Bracey Sherman, activist, founder, executive director of We Testify, which is dedicated to the leadership and representation of people who have abortions. She has written a number of pieces: in Time magazine, “Voting Won’t Save Abortion Rights,” and last year wrote a Rewire piece, “The Fall of 'Roe' Was Driven by Our Country’s Original Sin: Anti-Blackness.”

RENEE BRACEY SHERMAN: Hi. Thank you so much for having me here.

Where do I begin? I mean, your last segment was talking about white replacement theory. And I have long argued that the anti-abortion movement is simply the political movement of white nationalists and white supremacists, because they have been engaged in white replacement theory since the beginning of abortion restrictions, which started in the 1860s because Black people got free, right? Slavery ended, and they were afraid that white women were not going to have enough children to be able to maintain the population and that Black people would continue to have children, as they were forced to do under chattel slavery, and take over and become higher in population, political voting blocs, things like that. So abortion restrictions were really to push white people to have more babies, and restrict and, again, control the fertility of Black and Brown people across this country.

And every single time you see Black people getting free, Black liberation, after the civil rights movement, after right now Black Lives Matter — right? — you will also see a lot of anti-abortion restrictions, because white people are afraid of the political power that Black people are able to get, and people of color everywhere — right? — immigrants, undocumented folks, like, queer folks, all of us. They are afraid of us challenging the status quo and being able to decide if, when and how to have our families. So, all of this goes hand in hand.

That is why when we talk about this, it can’t simply be, “Oh, we’ll just vote in more politicians,” right? If we do not have politicians and legislative leaders that understand how complex all of this is and how we need a multipronged approach to protect our freedoms, our reproductive freedoms, we are never going to win, and we will always see restrictions on our families. It is all connected.

AMY GOODMAN: Renee, you’re wearing a T-shirt that says “I had an abortion.” Why is that so important to proclaim? It’s really the foundation of your organization.

RENEE BRACEY SHERMAN: Yeah. Well, like many of the people watching right now, I had an abortion, when I was 19. It was one of the best decisions I made in my life. I was in a relationship that was toxic and unsafe, and I simply did not want to be pregnant, and I did not want to parent at that time. So, I knew that I could have any abortion. My family had talked to me about it years before. And so I did.

But I felt the stigma and the shame, particularly as a biracial Black woman who had had an abortion, and didn’t really see people talking about abortion access for us and the intersection of racism, anti-Blackness and lack of abortion access and how, for Black folks, we’re damned if we do, damned if we don’t, right? The same people who shame us for having abortions are the same people who shame us if we are single Black parents. And so I felt a lot of that shame.

And so I decided that I didn’t want to feel it anymore, and I wanted to start sharing my story. And it was because I met other people who have had abortions. And then I shared my story so much that people in my family started sharing their abortion stories, including my mother, who later told me that she had an abortion before I was born. And so, it really reminds us that everyone loves someone who’s had an abortion, and abortion is a way in which we can grow our families and create our families. It’s how we build our families. And it is why I am here, because my mother was able to decide if, when and how to grow her family. And I was able to make that same decision.

I think it’s really critical for this moment for all of us who have had abortions to share our stories. You saw that at the rallies across the country. I’m sure there were a lot of people who were sharing their abortion stories for the first time, and some who were sharing it for the 20th, right? This is a moment for us to share our stories, change the conversation and demand action now.

RENEE BRACEY SHERMAN: Yeah. You know, I’ve learned over the last couple of years, I guess, the worst thing a progressive or radical can do is ask Democrats to do their jobs when they have power. I have been an abortion activist for well over a decade, and I feel like I’ve seen a lot of broken promises to people who are trying to get abortions, right? During the Obama years, when we saw all of the restrictions just, you know, enacting across the states, we asked if there was action that could be taken. And there were several times in which the administration said that abortion access wasn’t kind of the front issue. And in fact, policies that were racist and discriminatory, like the Hyde Amendment, which doesn’t allow Medicaid to cover abortion care, was not repealed. There wasn’t even like using a bully pulpit to try. And so, we were asked to wait and wait and wait. And meanwhile, I still get all of the emails from all of the Democrats — because I am a Democrat — all those emails saying, “You need to vote for us, you need to fundraise for us, because we’re going to save Roe.” And I’m just asking, “When?” Because it’s been well over a decade of this, and I want to know: Where is the action?

Today marks the 481st day that President Biden has been in office, and he has only used the word “abortion” once. He has not given us a plan. He has not had an open meeting with people who are having abortions or providing abortions in this moment. In fact, he has spent the last two weeks, since this leak, meeting with police officers to give them more money. He has met with gun manufacturers. And so, my question is: At what point are we, those of us who have had abortions, who are trying to have abortions right now, and providing abortions, going to get that same attention from our pro-choice president? It is super important that everyone votes, absolutely, and you should vote for politicians who are going to protect your bodily autonomy, whether it’s abortion rights or trans rights. But also, when those elected officials are in office, it is not enough to vote for them. We need to ask them to do their jobs. Where is the plan? President Biden —

RENEE BRACEY SHERMAN: — promised us a whole-of-government response, and we need to see it.

AMY GOODMAN: Renee Bracey Sherman, we want to thank you for being with us, executive director —

AMY GOODMAN: — of We Testify. That does it for our show. I’m Amy Goodman. Stay safe. 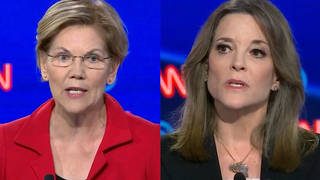