We speak with Jennicet Gutiérrez, an organizer and co-executive director of Familia: Trans Queer Liberation Movement, who declined an invitation to attend the annual White House Pride Month celebration to protest the detention and deportation of LGBTQ immigrants and asylum seekers. At the U.S.-Mexico border, trans people in detention centers are reportedly being misgendered, denied access to essential healthcare, held in inhumane conditions or blocked altogether from entering the country due to the Trump-era Title 42. Roxsana Hernández Rodriguez, a trans asylum seeker from Honduras, died while in ICE custody. Regarding Biden’s recent executive orders to establish some protections against anti-LGBTQ discrimination, Gutiérrez says, “We cannot just applaud and say, 'Yes, you've done enough,’ when, no, that’s the least you can do.”

We end today’s show with someone who was invited to the White House on Wednesday but didn’t attend President Biden’s Pride Month celebration. Jennicet Gutiérrez is a community organizer and advocate with Familia: Trans Queer Liberation Movement. She declined the invitation to attend to protest the Biden administration’s detention and deportation of LGBTQ+ immigrants and asylum seekers. In a letter addressed to President Biden and first lady Dr. Jill Biden, she wrote, quote, “There should be no White House celebration when trans and queer communities are suffering and being detained by your administration. There is no pride in detention.”

Jennicet Gutiérrez, welcome back to Democracy Now! President Biden signed executive actions to support the trans community, but you felt strongly you wanted to take a stand yesterday, although you were invited. Talk more about why you didn’t go to the White House.

JENNICET GUTIÉRREZ: Hi, Amy. Thank you for having me back.

LGBTQ people are under attack. Undocumented LGBTQ people, people living with HIV or any medical condition, are still being detained and deported. So, knowing this, I couldn’t join the celebration.

AMY GOODMAN: You’re in Phoenix, which, by the way, is extremely hot, for people who aren’t following the news, I mean, well over 100 degrees now over the last days. Talk about Arizona and what’s happening to people on the border.

JENNICET GUTIÉRREZ: Yes, thank you. Arizona is one of the states, along with Texas, Florida, Alabama, who have, you know, governors sign bills targeting specifically transgender people. And we are mobilizing with the No Pride in Detention, that it’s not OK for our community to be targeted, to be scapegoated, because, you know, lives are at risk. And we will continue to do everything we can, Amy, in the organizing power with community to make sure that our voices are heard and our issues are being center.

AMY GOODMAN: Jennicet Gutiérrez, we spoke to you last in 2015, when you interrupted a speech by President Obama at the time. I just want to play a clip. This was a gathering celebrating LGBT Pride Month at the White House seven years ago.

PRESIDENT BARACK OBAMA: I’ve told you that the civil rights of LGBT Americans—

AMY GOODMAN: That’s Jennicet Gutiérrez shouting, “I’m tired of the abuse.” So, that’s 2015, Jennicet. And standing right next to President Obama was Vice President Biden, who is now president. Do you feel he has done any better? And if you did meet with Biden, what would you tell him?

JENNICET GUTIÉRREZ: He hasn’t done better. He has been in power for too long, even before becoming president. He’s been a senator. He was the vice president. And now he’s the most powerful man in the world. And he still — finally, you know, signed an executive order, but, you know, it’s not enough. It will never be enough. We cannot and will never forget the most vulnerable among us. So we cannot just applaud and say, “Yes, you’ve done enough,” when, no, that’s the least you can do. And the demand continues to be end trans detention. And I have not had the opportunity to meet in person with President Biden.

AMY GOODMAN: Can you talk more about President Biden and detention centers overall? You’ve been demanding the release of all people living with HIV and other medical conditions from ICE detention. There’s the case of Roxsana Hernández in 2018, a trans woman from Honduras. If you can talk about her family suing ICE and DHS, Department of Homeland Security, and what came of that?

JENNICET GUTIÉRREZ: That is correct. There is a pending litigation against Department of Homeland Security — Security, excuse me — Customs, Border Patrol, CBP, because Roxsana Hernández, a trans immigrant woman from Honduras, 33, should still be living. She should still be with us, fighting for her dreams.

And her death caused tremendous pain among the community. Her family was devastated to learn that she died while seeking protection in this country. Her nephew, only 7 years old or younger, you know, sent a voice recording a year ago, while many community members came to D.C., under this administration, demanding — right? — accountability and justice for Roxsana, Victoria and Johanna, three trans women who died in ICE custody, and asking for the release of transgender people, people living with HIV or any other medical condition. So, you know, to hear that message from a young sibling of Roxsana claiming and saying all she wanted to do was support and help her family and fight for her dreams, and she’s no longer with us. So, that, to me, is unacceptable.

AMY GOODMAN: Finally, Jennicet, we have less than a minute, but if you can talk about LGBTQ+ asylum seekers stuck in Mexico, blocked from entering the United States due to Title 42 — that was the Trump-era policy — many of these experiences recently documented in a Human Rights Watch report?

JENNICET GUTIÉRREZ: Yeah. Title 42 is impacting undocumented LGBTQ folks, people seeking asylum in this country. And it’s not a safe condition that they’re under. And we will continue to do everything we can to make sure that this administration gets rid of Title 42 to allow people to come in this country and seek that protection that they deserve.

AMY GOODMAN: Jennicet Gutiérrez, I want to thank you so much for being with us, community organizer and advocate with Familia: Trans Queer Liberation Movement, speaking to us from Phoenix, Arizona. 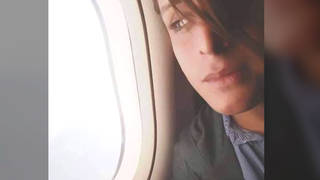