Johana Medina, a 25-year-old transgender asylum seeker from El Salvador, died at an El Paso, Texas, hospital this weekend after spending seven weeks in immigration jail, according to several LGBTQ groups and advocates who knew her. Medina had sought medical treatment for nearly two months for complications related to HIV/AIDS before finally being transferred to the hospital last week. She died four days later. Medina is believed to be the second transgender migrant to die in or after being released from ICE custody since Trump became president. The other is Roxsana Hernández Rodriguez, a 33-year-old Honduran transgender woman who died while in ICE custody in May of last year. An autopsy revealed that she was physically assaulted prior to her death. We speak with Isa Noyola, deputy director at Mijente and prominent transgender and immigrant rights activist based in Phoenix, Arizona.

StoryOct 13, 2021“Missing in Brooks County”: Thousands of Migrants Denied Due Process at Border Have Died in Desert

JUAN GONZÁLEZ: We turn now to look at the Trump administration’s deadly treatment of transgender asylum seekers in immigration prisons, after a transgender woman died after being released from ICE custody Saturday. Johana Medina, a 25-year-old transgender asylum seeker from El Salvador, died at an El Paso, Texas, hospital this weekend after spending seven weeks in immigration jail, according to several LGBT groups and advocates who knew her. Medina had sought medical treatment for nearly two months for complications related to HIV/AIDS before finally being transferred to the hospital last week. She died four days later.

AMY GOODMAN: Johana Medina is believed to be the second transgender migrant to die in or after being released from ICE custody since Trump became president. The other is Roxsana Hernández Rodriguez, a 33-year-old Honduran transgender woman who died while in ICE custody in May of last year. An autopsy revealed she was physically assaulted prior to her death.

We welcome you to Democracy Now!, Isa. Can you describe what you understand were the circumstances of her death?

ISA NOYOLA: The circumstances of Johana are the same circumstances that so many trans women inside immigration detention centers are facing, which is cruel and inhumane treatment and human torture. And so, we understand that Immigration and Customs Enforcement has seen trans women, immigrant trans women, as disposable, you know, from—we see it through the ways that they’re placing trans women through administrative segregation and also denying them medical care and medical treatment.

And Johana is just another example, another extreme story of so much loss and of so much pain that someone has endured, even after the long and arduous journey of arriving to the border. And so, Johana left her hometown with so much hope, of El Salvador, her country, and she had so much hope for a better life, to live her life fully, authentically as a trans Latina immigrant woman, and only to be met with violence at the border and discrimination, and even more violence inside detention facility.

JUAN GONZÁLEZ: I’m wondering if you could talk of your experience with refugees who are coming, who are trying to get into the United States. The one group in Honduras, Cattrachas, which is a lesbian feminist organization, has estimated that between 2013 and 2017, they found 34 cases of lesbian, gay, bisexual and trans people who had been deported back to Honduras and then were later killed. And what the situation is for trans folks, especially in Honduras and Central America, right now?

ISA NOYOLA: The climate for trans people globally is alarming. The level of violence has always existed. It is now recently being studied, researched and documented by the media. But being in the trans community and doing this work for so many years, doing local immigrant rights work for trans people in San Francisco at El/La Para TransLatinas, we always understood that the violence surrounds our daily lives, violence surrounds the community, and that—one of the main push factors and reasons why trans people migrate, why trans people globally are seeking refuge, are seeking safety, are seeking a better place to live their lives and to have a chance, have a possibility of, you know, what everyone else has, what everyone else is living in terms of their dreams, in terms of their having access to healthcare, having access to housing, having access to education, having access to community, right? And so, detention and immigration have been—Immigration and Customs Enforcement have been hell-bent on denying basic human rights to our community.

And so, the phenomena of violence and murder is not a new thing. There’s no uptick. It has always existed. Now there’s an acknowledgement of it. But the realities that Central American trans people, queer, LGBT+ folks have faced in their countries are the same that are experiencing in Mexico, in Asia, in all over—all over the continent of Africa. And so, we understand that the violence is one of the main factors of why trans people are marginalized, why trans people are placed in vulnerable situations where they have very limited choices. And so, when you understand that there’s a systemic issue involved when you get to the border—right?—and then you’re returned back, you know, people are still going to find possibilities to exist and to live.

AMY GOODMAN: A report released last month by the International Consortium of Investigative Journalists revealed that, since 2012, ICE has used solitary confinement as a routine punishment for thousands of immigrants and asylum seekers locked up in immigration jails across the country.

AMY GOODMAN: Immigration officers repeatedly used isolation cells to punish gay, transgender and disabled immigrants for their identities. This is a clip from an NBC interview with two trans women who were held in isolation while in ICE custody. In this clip, we hear from Dulce Rivera, a trans woman from Honduras who was kept in solitary for 11 months while in ICE custody and attempted suicide. But first, Joselin Mendez, a trans woman from Nicaragua who was put in solitary twice for a total of nine days.

JOSELIN MENDEZ: [translated] And, well, the truth is, what I went through in there is something I don’t even wish on my worst enemy. It’s horrible. I felt like I really didn’t know what was going to happen to me. I felt afraid. I felt that I couldn’t even breathe. And at the beginning, I began to scream and scream where they locked me up. I told them, “Release me. I can’t stand it. I am short of breath.”

DULCE RIVERA: [translated] I asked them for help. I told them, “I need to see a psychologist. I need to see a psychologist.” And what happened is that the guard’s response was “no.” So then I decided to tie a piece of blanket to the window above, and I completely covered the door outside so that no one was seeing what was happening inside the room. I made a lasso. I hung myself. So it’s something psychological, mental, that it affected me being in that place. So disgusting and horrible.

AMY GOODMAN: That’s Dulce Rivera and, before that, Joselin Mendez, describing their experience in solitary. Isa, as we wrap up, I wanted to ask you about Johana’s death. She was held in an all-male detention facility? And if you could describe these facilities that you’ve entered and seen, and what you’re calling for?

ISA NOYOLA: I also—I want to clear something up also. I just want to be very, very clear that Immigration and Customs Enforcement is responsible for the death of not just Johana Medina and Roxsana Hernández, but also Victoria Arellano in 2007, who was handcuffed to her bed, pleading for her life, and was an HIV-positive trans woman. So, ICE, Immigration and Customs Enforcement, has to be held accountable for the deaths of these trans women and all the deaths that happen inside detention facilities, and customs/Border Patrol has to be held accountable for the deaths that are occurring at the border.

Johana, you know, her experience that she had at the Otero facility is one that exists—the experience that exists in all of the 200-plus facilities that exist around the country. And that is one of human rights violations and denial of access to medical treatment and to basic human dignity. The ways that trans women are classified by Immigration and Customs Enforcement is based on genitalia, is based on a classification that does not align with our community, that is dehumanizing us from the very beginning. And Immigration and Customs Enforcement does not make any excuses about that. They are very clear and adamant that trans people inside detention are not human beings. And they’ve demonstrated that time and time again. And Johana, her experience is one of many of trans people who have been placed in—whether it’s administrative segregation or whether it’s with other, in the male housing units—right?—where sexual assault is experienced, and one of the highest levels for trans people inside detention.

NEXT“We’re Left to Defend Ourselves on the Margins”: 8 Black Trans Women Have Been Murdered This Year 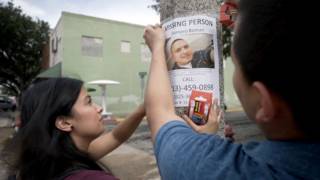