President Biden is in Israel as part of a four-day trip to the Middle East, where he reaffirmed his support for Israel despite growing disapproval among members of the Democratic Party over the state’s brutal treatment of Palestinians. The Biden administration faces criticism over plans to build a U.S. embassy in Jerusalem on land that was illegally confiscated by Israel from Palestinians in 1948, as well as the State Department’s whitewashed investigation of Shireen Abu Akleh’s killing, which multiple other independent investigations have determined was caused by an Israeli bullet. “By not engaging in dismantling the structures of discrimination and oppression … that Israel maintains, the United States is in fact supporting those structures,” says historian Rashid Khalidi, whose family is among the Palestinians whose seized lands are set to be used for the embassy.

PRESIDENT JOE BIDEN: Now, as president, I’m proud to say that our relationship with the state of Israel is deeper and stronger, in my view, than it’s ever been. And with this visit, we’re strengthening our connections even further. We have reaffirmed the unshakable commitment of the United States to Israel’s security, including partnering with Israel on the most cutting-edge defense systems in the world.

On Friday, Biden will visit the occupied West Bank, meet with Palestinian President Mahmoud Abbas. Ahead of Biden’s trip, activists hung banners in Bethlehem that read, “Mr. President, this is apartheid.” This is Kareem Jubran with the Israeli human rights group B’Tselem.

KAREEM JUBRAN: [translated] This campaign by B’Tselem, which involves hanging banners reading, “Mr. President, this is apartheid,” identifies Israel as a country of apartheid. We hold the American administration responsible for supporting the Israeli apartheid regime. The United States of America, as a democratic country, should push for an end to this system.

AMY GOODMAN: Biden’s first visit to the Middle East as president is also aimed at normalizing relations between Israel and Saudi Arabia. On Friday, Biden will fly to Saudi Arabia for talks with Saudi officials, which we’ll discuss more later in the broadcast.

But first, the Middle East trip comes as the Biden administration is facing pressure to scrap plans to build a U.S. embassy in Jerusalem after a Palestinian legal group revealed the proposed diplomatic compound is located on land that was illegally confiscated by Israel from Palestinians in 1948. The historical documents were made public by the Palestinian legal group Adalah ahead of Biden’s trip to Israel and the occupied West Bank.

For more, we’re joined by Rashid Khalidi, a Palestinian American professor who’s a descendant of some of the owners of these properties. Rashid Khalidi is Edward Said professor of modern Arab studies at Columbia University, the author of a number of books, including his latest, The Hundred Years’ War on Palestine. He’s joining us from near Aix-en-Provence in France.

Professor Khalidi, welcome back to Democracy Now! Why don’t we start there, around this issue of the proposed U.S. embassy, already very controversial, being built in Jerusalem, and the property that it is proposed to be built on?

RASHID KHALIDI: Right. Well, as you mentioned, Adalah, the Palestinian civil rights legal group, based in Haifa, has come up with a bunch of new documents which show the ownership of our family and a number of other families of this land going back before 1948. In planning to build on our property and the property of all these other families, the U.S. government is actively engaged in infringing on the property rights of the legitimate owners of this land, who are U.S. citizens. So, that, in a nutshell, is what’s going on. This is something that wouldn’t happen anywhere else in the world, if a regime illegitimately seized the property of U.S. citizens.

NERMEEN SHAIKH: Could you explain how it is that this land was chosen, and what the families are calling for, including your own, of course?

RASHID KHALIDI: Right. Well, it is a plot that is empty right now, ever since 1948, until which it was the headquarters of the British military in Palestine. It was called the Allenby Barracks in those days. And until 1948, when the British military occupied it — and, in fact, even after that — Britain paid all of the owners rent. Members of my family — my uncle Walid, my cousin Ikram — were receiving rent from the British government for this property well into the 1950s. So, this is a — it’s a large tract. It’s more than seven acres. And there are multiple owners, including my family.

AMY GOODMAN: We’re actually showing the deeds. Can you explain what these are? And what has been the response of the United States?

RASHID KHALIDI: Well, it’s interesting. These are things that Adalah discovered in the Israeli archives. And what they are are rental agreements between the Ministry of War, the British Ministry of War, and different families or different owners of different families, Palestinian families, both Muslim and Christian. And so they’re proof that this was property that was owned by these — by our family and these other families right up to 1948. And indeed, as I mentioned, I was talking to one of my cousins: She said her father was receiving rent from the British well into the 1950s. So, this was our property. The British rented it from us and other families.

In fact, this has come up before. The Israeli government put through a plan to do this in the 1990s. And back in 1999, writing on behalf of the owners of this property, I wrote Secretary of State Albright in October 1999, in fact, providing the U.S. government with evidence of our ownership, collective ownership, of this property. And we asked at that time that they — first of all, they not do this, and we asked for a meeting, which of course we never got. But we did get a response from the State Department, many months after our original letter, in which they said they understood, they had put the information on file. So our government knows that this is our property. And if they don’t, they should know, because I wrote them a letter on behalf of the families back in October 1999. And we sent — we didn’t send this new information. Adalah has discovered new information. We sent the information that was in our possession at that time in 1999. And the plan stopped dead at that point — whether because of our intervention or for some other reason, I really don’t know.

And so, our demand is that they not do this, first of all. And we’re — obviously, Adalah will be going forward on behalf of the various families to try and make Israel obey its own laws, which say that if owners of so-called absentee property — that’s basically stolen property. Let’s use the correct term. The legal term in Israel is “absentee property.” There are members of my family living, you know, a kilometer away, so how are they absentees? But in any case, for the Israeli government to obey its own laws and for the custodian of that absentee property, so-called, to return this property to its rightful owners. I don’t expect that to happen, but I hope that during this visit the president will be confronted, hopefully by a journalist or someone else, with the fact that the U.S. is about to build on land that belongs to U.S. citizens, among others.

NERMEEN SHAIKH: Professor Khalidi, Biden is expected to meet Palestinians tomorrow, possibly just Mahmoud Abbas, but he’s expected not to revive peace discussions as previous presidents have done. Could you elaborate on that? What do we know of what’s likely to be the focus of discussions tomorrow, Friday?

RASHID KHALIDI: Well, I think that what the president is supposed to do, according to the news reports I’ve seen, is to throw a few charity bones to the Palestinians. This is an administration whose policy supposedly includes security and freedom for both Israelis and Palestinians. In fact, that means security and freedom for Israel but not for Palestinians. By not engaging in dismantling the structures of discrimination and oppression — which someone rightly called apartheid — that Israel maintains, the United States is in fact supporting those structures.

So, by not launching a peace process, the United States is supporting a discriminatory, racist regime, which gives the Israelis rights to go to the beach anytime they want, but West Bank residents have to get permission from Israel. So Palestinians in their own country are arrested — my brother’s son-in-law was arrested the other day simply for trying to go to the beach in his own country. Why? He didn’t have a permit from Israel. That’s the kind of racism, that’s the kind of discrimination, which the president, by not opening up all of these political issues, is in fact supporting, with our tax dollars, with American diplomatic support, with American weapons.

So, I would hope that those issues are broached with the president. Those are the really important issues — equality for Palestinians and Israelis, equality of security, equality in terms of freedom and rights. And that’s what we don’t have right now. We have a system of systemic, legalized inequality; racist, discriminatory system. 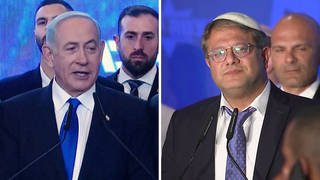