A federal judge has blocked key portions of Florida’s new “Stop WOKE Act” that attempts to block discussions of racism and white privilege in workplaces and public schools. The preliminary injunction comes as the law is being challenged by business owners, students, educators and the American Civil Liberties Union. We speak with Diane Roberts, journalist and professor of English at Florida State University, who says faculty have either become so scared that many have left the university or are considering leaving. “A lot of people will self-censor, and I think that was the idea all along,” she says, noting this is especially true for untenured faculty. Roberts also discusses DeSantis’s potential run for president. Her new Washington Post op-ed is headlined “DeSantis aims to scare academics. Unfortunately, it’s working.”

AMY GOODMAN: This is Democracy Now! We’re staying in Florida now to look at how a federal judge Thursday blocked key portions of Florida’s new law, called the “Stop WOKE Act,” that restricts race-based conversation and analysis in workplaces and schools. The law had major backing from Republican Governor Ron DeSantis and has been challenged by multiple groups, including business owners, students, educators and the American Civil Liberties Union. On Thursday, U.S. District Court Judge Mark Walker issued a preliminary injunction to block what’s called the private employer provisions in the law, saying it violates free speech protections and is too vague. Judge Walker wrote, quote, “Recently, Florida has seemed like a First Amendment upside down. … Normally, the First Amendment bars the state from burdening speech, while private actors may burden speech freely. But in Florida, the First Amendment apparently bars private actors from burdening speech, while the state may burden speech freely.”

This comes as DeSantis took his culture war on the road this weekend to stump for Trump-backed candidates in Pennsylvania and Ohio amidst growing speculation that DeSantis may run for president in 2024.

For more, we’re joined in Tallahassee, Florida, by Diane Roberts, journalist and professor of English at Florida State University. She wrote about the Florida governor in her new Washington Post op-ed headlined “DeSantis aims to scare academics. Unfortunately, it’s working.” In it, she writes, “DeSantis likes to call Florida 'the freest state in these United States.' University faculty wonder if that freedom extends to the mind. Many, perhaps most, of us will continue to teach the way we always have, raising difficult questions and encouraging debate. But junior faculty not protected by tenure may think they must censor themselves in the classroom. That will be a shame. Education demands that we search for truth, even painful truth. I will continue assigning books by Herman Melville and Ta-Nehisi Coates, Alice Walker and Alison Bechdel, Claudia Rankine and Richard Wright — writers who confront America’s past sins to help new generations shape America’s future. That’s my job. I might even use the words 'critical' and 'race' in the same sentence.” Those are the words of professor Diane Roberts.

Welcome to Democracy Now! Talk about the significance of this “where woke goes to die.”

DIANE ROBERTS: Well, I’m not sure it means anything, really. I think it is a way for Ron DeSantis to whip up his base, who seems, rather perversely — the base, I mean, as well as DeSantis — to have decided that if a professor, or indeed a teacher in primary or secondary school, even talks about certain things, it somehow poisons the mind of youth. So, if we talk about, I don’t know, socialism, they’ll all become socialists. If we mention the word “gay,” they’ll turn gay. He knows better. He knows that’s not how it works. He had a very nice education himself at Yale and Harvard. And yet he seems to have come out of those, you know, liberal bastions of woke with his conservatism unscathed.

So, I think a lot of it is theater, but it’s had a chilling effect. Exactly as Desmond Meade in your last segment said, it scares people. And scared people don’t do what they would normally do, whether that’s either try to vote or teach. And it is a very nasty attack on higher education, and a lot of people will self-censor. And I think that was the idea all along.

AMY GOODMAN: So, you begin classes today, Professor Roberts. The semester begins today. Can you talk about how particularly this bears on everything from the teaching of critical race theory to discussions about LGBTQ rights?

DIANE ROBERTS: Well, again, I think it will have a chilling effect. But a lot of us, at least my colleagues, don’t intend to change a thing. We intend to answer questions when we get them. We intend to teach writers who might maybe suggest questions about LGBT — excuse me, LGBTQ rights, like James Baldwin or whomever. We are in the business of opening minds, not closing them. And students have a lot of questions. You know, our students aren’t idiots, nor are they sponges. They don’t just soak up whatever the professor says. They challenge. I’m delighted they challenge. I encourage them to challenge. I’m not trying to teach them what to think; I’m trying to teach them how to think, to think, to evaluate, to question everything. And I have conservative students, I have left-wing students, I have everything in between. We seem to muddle along quite happily without all of this threatening nonsense that is coming out of the governor’s office. But this is DeSantis’s style. He’s a dictator wannabe, as best any of us can tell. Role model seems to be Viktor Orbán.

AMY GOODMAN: The Hungarian leader who was invited to speak at CPAC and did just last week. Finally, the fact that Ron DeSantis is taking his message — looks like he’s beginning a presidential campaign — to Ohio and other states.

DIANE ROBERTS: Of course he is. He’s been running for president since the minute he got elected governor, because we’ve noticed that so much of his campaign money comes from out of state. He has been pushing all of the right buttons. You know, teachers are the enemy. Doctors are sometimes the enemy. You know, he’s got — we’ve got a surgeon general who doesn’t think much of vaccines, any kind of vaccines, apparently, and that’s not going to go well. We have all of these people in universities who are leaving or thinking of leaving. I mean, my own university lost some very prominent law professors. Obviously, faculty leave for all kinds of reasons, but this may have had something to do with it. The University of Florida is losing people. And the University of Florida has, unfortunately, been kind of the poster child for how frightening DeSantis can be. Their board of trustees is a bunch of Republican donors. And the president at the University of Florida made a slideshow, sent to all of the faculty, about being careful what they say, because if things go wrong and the governor notices, they could lose $100 million in funding.

AMY GOODMAN: Well, I want to thank you very much for being with us, Diane Roberts, journalist and professor of English at Florida State University. We’ll link to your Washington Post op-ed headlined “DeSantis aims to scare academics. Unfortunately, it’s working.” Also, the latest news out of Florida: A suspended Florida prosecutor, suspended by Governor Ron DeSantis over his views on abortion, is fighting to get his job back.

Well, next up, we’re going to speak with a member of the Alphabet Workers Union in Denver, who are demanding Google protect the location and browser history of people searching for information on abortion and more. Stay with us. 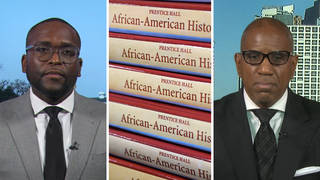