We look at how the Ukraine war is contributing to an energy crisis across Europe with Greek politician and economist Yanis Varoufakis. Last week Russia announced it would not resume sending natural gas to Europe via the Nord Stream 1 pipeline, blaming Western sanctions for supposed maintenance delays keeping the gas shut off. Prior to the war, Russia supplied Europe with 40% of its natural gas, but now European nations must find ways to cope with fuel shortages and soaring energy prices as winter approaches. Varoufakis says a history of market liberalization and reliance on cheap Russian gas has left the continent scrambling, in turn pushing up energy costs in the Global South as richer European countries buy up other sources of energy. “Yet again, Europe is exporting misery to the rest of the world,” says Varoufakis, a member of the Greek Parliament and former finance minister. His latest piece for Project Syndicate is “Time to Blow Up Electricity Markets.”

As Ukraine continues to seize more Russian-occupied land in its largest counteroffensive to date, we turn now to look at how the war in Ukraine is leading to an energy war in Europe. Last week Russia announced it would not resume sending natural gas to Europe via the Nord Stream 1 pipeline until the West lifts sanctions imposed after Russia invaded Ukraine in February. Prior to the war, Russia supplied Europe with 40% of its natural gas. Now European nations are scrambling to find ways to cope with gas shortages, as well as soaring energy prices. There are growing fears the energy crisis could lead to rolling blackouts and the shuttering of some industries during the winter.

We go now to Athens, Greece, to Yanis Varoufakis, member of the Greek Parliament, former finance minister of Greece. His latest piece for Project Syndicate is headlined “Time to Blow Up Electricity Markets.”

Yanis, welcome back to Democracy Now! What do you mean?

YANIS VAROUFAKIS: We shouldn’t have electricity markets. It’s an abomination. Think about it, Amy. There can’t be an electricity market, to the extent that in your apartment, in your studio, there is one single wire coming out of the wall carrying electricity. There can’t be a market. It’s an actual monopoly. The only way we could have had a market would be if we had 50 different wires, each belonging to a different company, and we could choose which one we connect our appliances to. But, of course, that would be completely crazy, because we would have 50 grids running through every suburb, through every city, through the land. That would be so inefficient, it would be ridiculous.

So, what we have is not really markets. We have the state that steps in and pretends that it is a market, simulates a market, creating a kind of semblance of competition between producers of electricity and a semblance of competition between, supposedly, retailers of electricity, people who — companies that buy electricity wholesale and then sell it to you individually. But all that is a state creation. It’s, you know, a libertarian’s, right-winger’s nightmare, if you want. It’s a market — it’s a fake market created by the state.

And the impact of this being a fake market emerges during periods of stress, like in the 1970s, when we had the oil crisis, and then, of course, that translated into electricity price crisis, and now with what is happening with supply chain interruptions and the war in Ukraine. The thing to remember is that electricity prices, the prices that people in New York, in Los Angeles, here in Athens, everywhere, the prices we pay have risen by a much greater factor than the cost of producing electricity. So, you’ve got the oligarchs that are dominating this state market, that pseudo-market, that fake market, benefiting tremendously out of this crisis.

JUAN GONZÁLEZ: And, Yanis, I wanted to ask you about this. Europe made a decision, clearly, following the collapse of the Soviet Union, that it would integrate its economy, especially when it came to energy, with Russia, now, of course, being forced rapidly to move for other sources of gas and oil. Could you talk about this decision, the original decision and now the change, and what the impact of Europe’s strategic decisions are having on the rest of the world?

The tragedy is that since the Lehman Brothers collapse and the Wall Street implosion in 2008, which very quickly brought down the whole of the banking sector in Europe and precipitated a major economic and social crisis in Europe, with Greece being, of course, the worst-hit place, but Germany, France, Italy, Spain, Ireland, Portugal — we all suffered as a result — during that period, we didn’t invest in energy, in renewables. We had zero investment, almost zero investment in the renewables, that we needed in order to save the planet, on the one hand, and to decouple from the Putin regime in Russia. And it is only now, years and years later, that the chickens are coming home to roost across Europe.

JUAN GONZÁLEZ: And the impact on the Global South of Europe buying up gas and oil wherever it can find it?

YANIS VAROUFAKIS: Well, it’s awful, isn’t it? We are exporting poverty. In 2008, 2009, 2010, with the crisis of the German and the French banks initially, and then the public debt crisis, Europe exported deflation to the rest of the world. We exported unemployment to the rest of the world. Now we are exporting poverty, energy poverty, which translates then into food poverty, because, as we speak, there is a scramble, by Germany, by France, by Italy, even by little Greece, to buy all the gas that we can, you know, in liquefied form from Norway, from Qatar, from Algeria, from wherever they are selling it. And, of course, rich Europe, rich European countries, relatively rich, they can outbid the whole of the African continent and most of Asia, Latin America in those markets. So they’re pushing prices up for those countries, the developing world, while at the same time food shortages are hitting those countries. So, you know, yet again, Europe is exporting misery to the rest of the world. We’ve doing this for a thousand years; it’s not new, right? Colonialism began from these shores.

AMY GOODMAN: Yanis, if you could talk about your call for an end to Russian sanctions and your response to the latest kind of Ukrainian blitz taking back city after town, Russia, though, saying they would not negotiate at this point?

YANIS VAROUFAKIS: Well, it’s a tragedy that people are not negotiating when there’s a war, wherever that war happens. But I have say that, Amy, whenever an invaded country manages to repel the invader, I rejoice. I rejoice now that the Russian troops have been pushed back. I would rejoice if Palestinians managed to claim back their stolen land. I would rejoice everywhere and anywhere invaded peoples claim back their homes, their cities, their villages, their fields, their olive trees, whatever.

Having said that, we have a complete tragedy here in Europe with Ukraine, because I cannot see this war ending. There can be no final victory either for Putin or for Ukraine. There is very little doubt that Putin, as we speak, is planning another murderous escapade in different parts of Ukraine. We are in for a very long war, the victims of which are going to multiply and, you know, which will spread far and wide, as we said. There will be people dying of hunger in Africa, in Latin America. We are going to have an inflammation of the new Cold War between the United States and Europe, on the one hand, and China and Russia, on the other hand, with African nations, Asian nations pulling their hair out, because they — clearly, they don’t like Putin. They don’t like what Putin is doing. But at the same time, they refuse to accept that the United States of America, the government of the United States of America, or the Europeans can impose sanctions on anyone they don’t like, because they know that these sanctions have never been either efficient or in the interests of the majority of people in a majority of countries.

JUAN GONZÁLEZ: And, Yanis, I’m wondering — the big story in the corporate and commercial media the past few days, obviously, has been the death of Queen Elizabeth. Your perspective from — as a leftist political leader from Greece about all the fixation in much of the Western world over monarchs and, obviously, the royal family of Britain?

YANIS VAROUFAKIS: I try to be very careful, whenever somebody dies, independently of my opinion of the deceased, to respect the people who are in grief. And therefore, I will be very restrained in my response. Let me, however, give you a response.

My grief is for civil liberties, for freedom of expression. An acquaintance of mine the other day had a very interesting experience outside the House of Commons, the Parliament of the United Kingdom, in London, you know, next to Big Ben, or under the Big Ben. There was an arrest recently of a demonstrator who had the audacity to hold a placard up — not actually. It wasn’t even a placard. It was a piece of paper in which he had scribbled “not my king” as Charles was passing by. This person was arrested. My acquaintance, a couple of days later, went to the same spot and had a blank piece of paper and a pen. Blank piece of paper and a pen. And the police came along, and they were about to jump on him. And he said to them, “So, if I write here on this piece of paper, 'not my king,' will you arrest me?” And they said, “Yes.” So they were waiting. Now, that, to me, is the death of democracy. And since your wonderful channel is called Democracy Now!, I think, it is something that we should all be very, very aware of.

AMY GOODMAN: Yanis Varoufakis, we want to thank you so much for being with us, member of the Greek Parliament, former finance minister of Greece. We’ll link to your latest piece in Project Syndicate, “Time to Blow Up Electricity Markets.”

Next up, Julian Aguon, leading lawyer and writer from Guam. His new book, No Country for Eight-Spot Butterflies, out today. Back in 30 seconds.

NEXTJulian Aguon: U.S. Militarization of Guam Is “Nothing Less Than Cataclysmic” 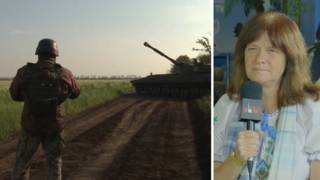