Thousands of students at campuses all over the country protested on Wednesday against Sodexho-Marriott, thecorporation that manages their university food services, but which also has links to the private prison industry.

Sodexho-Marriott has contracts with over 500 college campuses and is the North American subsidiary of the Paris-basedSodexho Alliance. The Sodexho Alliance is the largest investor in the private prison operator, CorrectionsCorporation of America (CCA).

CCA has in recent months become the symbol of what critics call the new American slave trade of private prisons. TheAmerican Civil Liberties Union, for example, is suing CCA on behalf of a woman who charges that guards repeatedlysexually assaulted her while she was moved across the country. Or, in an Ohio jail in 1997, CCA put non-violentburglars and drug offenders into cells with high level, violent offenders. In just over a year there were 44assaults, 16 stabbings, and 2 murders.

Sodexho Marriott spokespeople respond that they have nothing to do with the private prison industry. It is notSodexho Marriott, but Sodexho Alliance-which owns 48% of the food corporation’s shares-which invests in CCA.

But a growing number of people disagree. The Prison Moratorium Project launched the campaign against Sodexho-Marriottlast April. Since then, it has grown to include dozens of campuses across the country, and in the last month expandedto Paris and London.

StoryMar 26, 2020Bernie Sanders Fights for Laid-off Worker Protections in $2 Trillion Stimulus with Corporate Bailout
The original content of this program is licensed under a Creative Commons Attribution-Noncommercial-No Derivative Works 3.0 United States License. Please attribute legal copies of this work to democracynow.org. Some of the work(s) that this program incorporates, however, may be separately licensed. For further information or additional permissions, contact us. 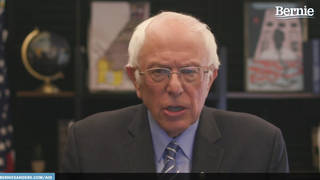