The Inspector General’s office of the Justice Department released a detailed report describing rampant abuse of 9/11 detainees inside a government-run detention center in Brooklyn. [includes transcript]

AMY GOODMAN: I want to go to another point, which is the third whammy for the Justice Department—or for the Bush administration yesterday. The Justice Department investigation into the treatment of 9/11 detainees at a federal prison in New York revealing physical and verbal abuse by as many as 20 prison guards. A report issued yesterday from the department’s Inspector General citing systemic problems in the way detainees were treated at Metropolitan Detention Center in Brooklyn. Among the problems detailed, unnecessary and inappropriate uses of strip searches, banging on detainee’s cell doors excessively while they were trying to sleep and this interesting statement within the report: “We did not find evidence that the detainees were brutally beaten, but we found evidence that officers slammed and bounced detainees against the wall, twisted their arms and hands in painful ways, stepped on their leg-restraint chains, punished them by keeping them restrained for long periods of time.” Barbara Olshansky.

BARBARA OLSHANSKY: This is quite an amazing report. We filed a case, Tuchman versus Ashcroft, in April of last year. And when we filed that case, we had to guess what was happening to immigration detainees. We got in eventually to see them and we knew, for example, that Mr. Jaffri, one of our plaintiffs, had had this happen to him, had his face repeatedly slammed into the wall to the extent that it really dislocated his jaw, broke several teeth, he was in dire need of a dentist. He had other bruises because of what the Inspector General’s report said here did happen to him. His shackles —- they were shackled hands to feet to waist, were used to drag people around. they were stepped on, they were yanked. People were really quite badly abused. And what this report did, really, is -—

BARBARA OLSHANSKY: Right. And you’re correct to emphasize that. That has really given us some hope that there are mechanisms within the government that are uncovering what is going on. And the extent of which —- at which the Office of the Inspector General was able to uncover and reveal conflicting statements by the guards that participated by showing very concretely how they violated the policy of the Federal Bureau of Prisons, and by talking very specifically and showing examples, there are still photos taken from videotapes of how all of this type of abuse happened. And the fact of the videotapes is really quite -—

AMY GOODMAN: These are prison videotapes?

BARBARA OLSHANSKY: Yes, they are. And what we have — what we have now learned is that there was a directive that came from higher offices in the Justice Department to destroy those videotapes. They didn’t have to be kept more than 30 days. They encouraged people to recycle them and/or destroy them. But for some reason many of them were kept, not all by any means, but many of them were. And the videotapes actually reveal this systemic abuse that was happening to these folks.

JUAN GONZALES: I’d like to ask Richard Samp, just in a general sense, we have been discussing a variety of cases, I have heard the arguments made that 9/11 has basically changed everything, and that, in essence, the protections that we had previously cannot be looked at in the same way. But the possibility of a complete aberration of the bill of rights in the process of fighting this war on terrorism seems to other people to be looming. What is your response to that?

RICHARD SAMP: I think the Bill of Rights is a very important document. Our organization is fighting constantly to ensure that those rights are upheld. I don’t think that the war on terrorism changes anything fundamentally in this country. We still have a rule of law. I support the right of people like Mr. Hamdi and Mr. Padilla to file writs of habeas corpus and to present evidence that says that they, in fact, did not assist the Taliban. And if Mr. Padilla can show that he was not meeting Taliban leaders in Afghanistan at the time the government said he was, he ought to be set free. I — I think that the fact that we have got an office of Inspector General that’s looking over the shoulder of prison conditions shows that the government is treating seriously the idea of civil liberties. So I don’t think anything has changed. On the other hand, one thing that has not changed is the foreign policy of this country and military affairs are run by the president, not by the courts.

JUAN GONZALES: But how can Mr. Padilla do that if he doesn’t have a day in court to prove that he was or wasn’t a member of Al-Quaida?

RICHARD SAMP: He ought to have a day in court. And that wasn’t the issue that was decided yesterday by the Second Circuit. The argument that’s been going on up to this point was that if the government has conceded his right to a day in court and the question was should he have a broad right of review, or should he be limited to the very narrow right of review that the government had been pushing for. But the second circuit by-passed that issue by saying that the government cannot hold him at all, regardless of how much evidence they have that he was trying to blow up an American city.

BARBARA OLSHANSKY: Yeah, I guess I have to, once again, disagree with Mr. Samp, because the government’s position in the Padilla case was that he did not have — there were no conditions under which they could agree to get him to see his attorney. They just refused to agree to set those conditions. Judge Mukasey said he has to have access to counsel. In order for the writ of habeas corpus, for him to test his detention, for me to examine this, he has to have counsel to help him present his case. And the government came back and said, there are no conditions that we will agree to let him meet with his lawyer. That really means that that writ, that right to get to court, was completely obliterated in the government’s view. They didn’t want him to be able to make that meaningful argument. Otherwise, they would have given him the right to counsel.

And, you know, I do think that this administration has fundamentally undermined the Bill of Rights. And you know, what I want to say about that is the people in the Tuchman versus Ashcroft case, these folks that were beaten in the Metropolitan Detention Center, they committed civil immigration violations. They didn’t commit any crime. There was no allegation of crime, no allegation of terrorist activity. They had overstayed tourist visas, and when an immigration judge said it’s okay for them to come home, the Justice Department, the FBI and the INS said that they can’t stay until we clear them. They are guilty until proven innocent. They were held for up to two years without any rights. That is not in keeping with the Bill of Rights.

AMY GOODMAN: I just wanted to ask Richard Samp, of the Washington Legal Foundation, a conservative legal organization, often at odds with the Center for Constitutional Rights, but in this day and age, in this post 9/11 era, a question about whether liberal and conservative lines are breaking down right now, that there are deep concerns among conservatives about the Bill of Rights, about privacy rights, about legal protections. Would you say that, more often than not now, you’re finding yourself, perhaps, more sympathetic to the arguments of groups like the Center for Constitutional Rights?

RICHARD SAMP: Um, I wouldn’t go quite that far. Obviously—

JUAN GONZALES: But the Cato Institute and the Rutherford Institute were because they actually filed briefs with the center.

RICHARD SAMP: That’s right. The Cato Institute is usually considered to be a libertarian organization. Which is one that, for example, on philosophical grounds opposes anything that restricts privacy rights. So, for example, they strongly support access to what are now illegal drugs, and don’t think the war on drugs is a good thing.

The difficulty with saying, “why don’t you put him into the criminal system?” is, my understanding is that the only evidence against him is the testimony of captured Al-Quaida leaders being held in other places around world. I don’t think it’s a realistic possibility that would you put those people onto the witness stand and get them to testify against Mr. Padilla. So if you really don’t have that criminal option—what the Second Circuit told us yesterday was that you essentially have to allow somebody to go free, even though you have what you believe is credible evidence that he was trying to destroy American society.

AMY GOODMAN: Well, on that note, I want to thank you all for being with us. Richard Samp is chief counsel of the Washington Legal Foundation in Washington. Barbara Olshansky, assistant legal director for the Center for Constitutional Rights. Her book is called Secret Trials and Executions, Military Tribunals and the Threat to Democracy, a Seventh Story’s Press. And also having joined us on the line, Steven Kenny, the Australian lawyer, who became the first lawyer to visit a prisoner on Guantanamo Bay. His client, David Hicks. 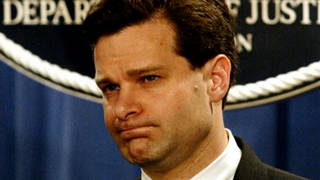